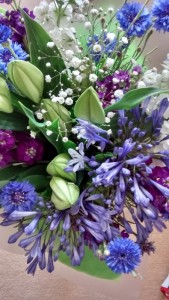 On Monday I was surprised by this beautiful bunch of flowers from the parents of my class- how kind.

The last few days of term were pretty stressful- there is always so much to do and time starts running out! But we are finished now, hooray! I usually have a meeting on Tuesday, but not this week, so I was home in plenty of time before heading out to the running club.

We had been warned last week that we would be doing intervals as for the last few weeks we have had lovely longer runs (5-6 miles). This was going to be shorter, but tougher.

We did a gentle run as a warm up, and then along a long straight stretch of uphill, we had to walk (high knees, long arms) to one lamppost, jog (arms at 90 degrees) to the next and sprint to the final one, repeated until we got to the top. It was tough, and you realise that you actually do need the walking breaks to get your breath back. Although I was very worried about tripping and falling. At one point I got up to 5.41 mm ( of course, only for a short distance). Checking on Strava after, I could see that I am getting faster on this route overall.

I was getting told off for hunching my shoulders up- I know I do it, but I can’t help it!

After getting to the top, we had to run back in the same way, but instead of the sprint being for one section, we had to go for as long as we could. The first time we did that, my sprint apparently turned into a run. So for the second one as I ran past our leader I shouted out “am I sprinting?”- apparently if you can say that, you are not. Need to work on that I think!

Afterwards my legs were really sore- we did loads of stretching but I was feeling the effects on Wednesday.

I would usually run on Wednesday, but my legs were sore in the morning, and I felt headachey (I think sometimes after evening runs I find it hard to re-hydrate enough) so I mooched around at home and had a couple of walks during the day. I had a sports massage booked for the evening which I badly needed (my shoulders just crunch when I roll them)- he told me after “it’s like working on a table” because they were so stiff! 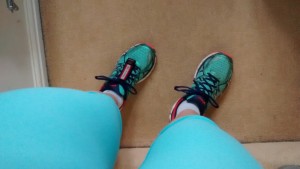 On Thursday morning I headed out for a run before going to work- I wore a pair of my new capris and was very excited to see that they matched my trainers (nearly). I did some squats and calf raises (homework from my run leader) before the run. It was lovely- nice and cool, and loads of stretches after helped my poor interval-sore legs. 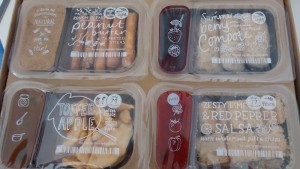 I spent the day in work, clearing out rubbish from my classroom (it is amazing what accumulates over the year)- I took a little graze dipper with me (the red pepper salsa one- yum) and a cereal bar, but didn’t think to take a proper lunch. On my way home I had to stop and walk to collect a parcel from the amazon locker. 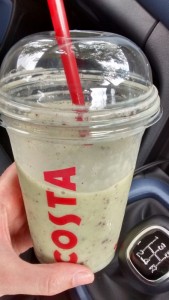 I was hot, and thirsty, and tired (I had not sat down all day) so I went to Costa (as I had to walk past it after collecting the parcel). I have tried one of their iced chai lattes before, when we saw Jurassic World at the cinema, but it wasn’t good- they made it with powder so it was all lumpy, and took them ages to make. Anyway, the mint choc soya cooler ended up tempting me. Now, it was good, sort of like drinking melted mint choc ice cream, but it was not the best choice- I had to take most of it home and share it with Andy. Also, that is a small! It’s huge!

Thursday evening was Body Pump- I was worried that I would find it harder because my shoulders were sore from the massage, but actually it was better. I think I had left it too long this time. Although the lunges track is so tough- you have to bounce, and I have no idea why, but it makes it so much harder.

When checking Strava for the matched runs, I noticed that I have run over 600 miles already this year! Although marathon training at the start of the year upped my mileage, and I have not been running as much since then. I was impressed with that though.

What are your summer plans?