Hey peeps, I hope you are all well. I am back home now, and trying to battle the jet lag (so apologies if I end up with weird typos)- I have been awake since 1am! 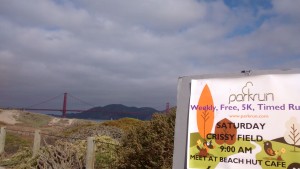 Anyway, after Hawaii, we had a few days in San Francisco before coming home. I think I saw they had a parkrun because Tom Williams (from marathon talk) put some photos of him there, but equally it might have been the Did You Run Today facebook group. Who knows. All I remember is that once I realised that we were there on the Saturday morning ( we got there Thursday night, and left Sunday afternoon) I knew I would have to do it.

The parkrun is in Crissy Field, an area of marshland next to the bay. On a previous trip to San Fransisco, we had been there, but either cycled or got a bus- it was a bit too far to walk from the centre. I did look into bus routes, but they were confusing, and seemed to take ages. The journey was only about 4 1/2 miles (and none of that is flat!) which was too far for me to run really, plus the navigation wasn’t that easy so I thought I might get lost. In the end, I signed up to Uber, because that, apparently, is what all the locals do. We used one to get from the airport (as we didn’t fancy the underground at nearly midnight) and it was brilliant.

If you don’t know, Uber is a sort of taxi app (there has been fuss about it costing real taxi companies business). I am converted. I hate getting taxi’s, and avoid it as much as possible. The thing is, the firms are so hit and miss. After the WR10K last year, I got one into the town centre and it was great, I got a text saying the number plate of the cab etc. But then in London after doing a 15K, I had awful trouble even finding a firm, and then it took ages to arrive and didn’t know where I was. Plus you never know how much the fare will be, and the drivers always huff and puff so much if you try to use a card. With Uber, all my stresses were gone. You load the app which uses GPS on your phone to show you your location, and all the cars nearby (it is quite fun to just watch the cars move about the streets). You move the pin on the map to show where you want to be picked up, and you can either get a fare estimation, or straight away book one and enter where you are going by typing in the address (I had made sure to print off the parkrun info so I had that to hand). Then, you get a message saying the make of the car (mostly Prius!), the number plate, the name of the driver and a little photo, and how long they will be. You can even watch the map to see where the car is. Amazing. Then, when you get in, they know where you are going- their phones show the GPS route to your destination. And, when you get there, the fare is automatically debited from your account, so no need to frantically find cash, or try to pay quickly while they are stopped along a busy road….All my taxi worries are sorted with this!

Anyway, after getting ready I called an Uber, which arrived in about a minute! There was not much traffic so I arrived at the start at 8.30am, although I got a bit worried because there was already a race going on (Escape the Rock- a swim and run)- I didn’t want it to be cancelled because of another event.

I took a few photos, and then saw some people setting up the sign, so I was very relieved. It was such a friendly event- the event director was greeting everyone with a handshake, and introducing himself. There were only 31 people running, and most of them seemed to be on holiday from the UK. We chatted for a bit about our holidays and running. Some of them were doing a race on the Sunday morning and were apprehensive about the 7am start- it seems most US races start early. The start was very leisurely- we were walked to the finish line so we knew what it looked like, and then walked to the start line. It was an out and back course- out one way towards Alcatraz, turn around (at the end of a pier- you couldn’t go wrong there!), come back past the start, along by the bay, towards the Golden Gate Bridge, turn around (here, they lose people, although they described it well, and it did have two parkrun signs saying “turn around here” on them, and it was at the 2 mile point for people with GPS), then back to the finish. Because there were so many people running anyway, and the finish was along the main coastal path, you had to wave at them so they knew you were a parkrunner, and finish between cones.

Because the start was in a car park (just for the beach) it was delayed a bit while we waited for cars to move about. In the end we started at about 9.15 I think, but who is counting? I could not decide on what to aim for really- I had run a few times over the holiday, but nothing fast (it was too hot). In the end I thought I would run on feel, but wanted to beat my 5K time from the run in Honolulu, as this was also flat, but also a bit cooler. I set off too fast (it is so easy to go off fast when you are so keen!) and after the first mile (8.40- very fast for me) I slowed down a bit. Running alongside the bay, with the fantastic scenery, was great. Because the final turnaround point was at 2 miles, it was ages before I saw anyone going the other way (4 speedy men all did it in just over 19 minutes). I had a runner behind me who was cheering on all the runners she saw, whether they were parkrunners, racers, or just out on their own. I saved my breath but managed a wave to the parkrunners I recognised. I didn’t look at my watch again, but there was a guy in a bright yellow top who I was trying to keep within my sight. I think that helped, as when I looked later my last 2 miles were both 8.59, with the final bit at 8.44 (seeing the finish cones gave me a final burst!). I was handed chip number 16! I don’t think I will ever finish that high again! I got my chip scanned right away, and then waited with everyone to cheer in the rest of the runners. There was a lady taking photos on the line of everyone, and when one lady finished, she didn’t get a good photo, so asked her to run it again for her photo- if only we all had that chance!

Enjoying it at the start (well, managing a smile)

I had my waist pack thing on for my phone, tissues, room key etc, but in the end could have left it with my jumper as they locked everything into a car while we were running- it was driving me mad bouncing about all over the place.

The sun came out at the end, which made the final mile feel very hot and tough indeed- my red face! In the final half mile I was overtaken by a lady (on holiday from Ireland) and after we finished she came and thanked me, as until that point she had been right behind me, using me as a pacer. Happy to help, especially when I don’t even realise I am!

It was such a lovely atmosphere on the finish line- everyone waiting until the final person finished- there were a few very diddy children who did really well. Then, the lovely lady (I have forgotten her name) offered to take photos of everyone by the sign, and then she mentioned that she had made lemon bars– amazing. I bought some water from the cafe, but time was getting on (it was gone 10am) and I didn’t want Andy to get worried, so after trying a piece (delicious) and wishing people good luck with their races the next day, I arranged another Uber and headed back to the hotel. I got the email while I was in the car- I was first in my age category! A first for me!

So, my first real bit of parkrun tourism (as I have only done two before this, both my local ones) and now I am keen to do a few more. We have a few weekends away booked for races (they are all 10K’s) but I might see if I can squeeze in a parkrun at one of them.

Amazingly, because Andy referred me to Uber, my first ride (up to $20, but it wasn’t that much) was free, so it only cost me about £7 in the end for the return journey- not much more than the bus and much less stressful. So, thanks Uber for making my parkrun tourism dream come true!

Where would you like there to be a parkrun? I feel like there should be one in Central Park as so many people run there all the time. Or somewhere spectacular like Niagara Falls would be pretty amazing.

Have you used Uber before? Are you a taxi-phobe like me?

I do have a referral code, which is mariab3614ue  – it means you would get a ride of up to $20 free, and then I would too, although I am not sure when I would use it again, seeing as it is only in London in the UK I think. But anyway, it’s there if anyone would like it. Also, not sure if you sign up in the UK whether it would be in £’s- Andy’s first ride was up to £10 free, as he signed up here.

18 thoughts on “A Golden Gate parkrun”