White chocolate is my least favourite chocolate- I quite like it, but I don’t love it. However, I do seem to use it in quite a few recipes- especially at the moment. Perhaps it is more summery than other chocolate. It does seem to go with fruity flavours. 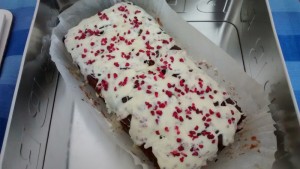 Last weekend I made a white chocolate and raspberry loaf for Sunday tea. The recipe, of course, is from the CCC book, although I subbed a bit of the regular flour for ground almonds as I think that goes nicely (It’s a normal loaf recipe with raspberries added to the batter, then topped with melted white chocolate). As I had the raspberries (they are little freeze-dried ones in a tube) I made some white chocolate and raspberry fudge, as end of term gifts for people at work. Can you believe I forgot to take a photo though? On a side note, I used my KitchenAid for beating the fudge and it was so much easier than using hand held beaters over the saucepan- the way forward from now on.

This weekend I fancied trying something new, and when flicking through the book I came across Orange and White Chocolate Cake- Andy liked the sound of it too, so I went with it.

Basically, it is orange cake, sandwiched with an amazing white chocolate and orange buttercream. In the photo, the buttercream is the filling, but it made so much I put half on top too (and you can see from the blob missing on the top, it touched the top of my biggest container- we took it for Sunday tea and brought home a large piece to share another day. 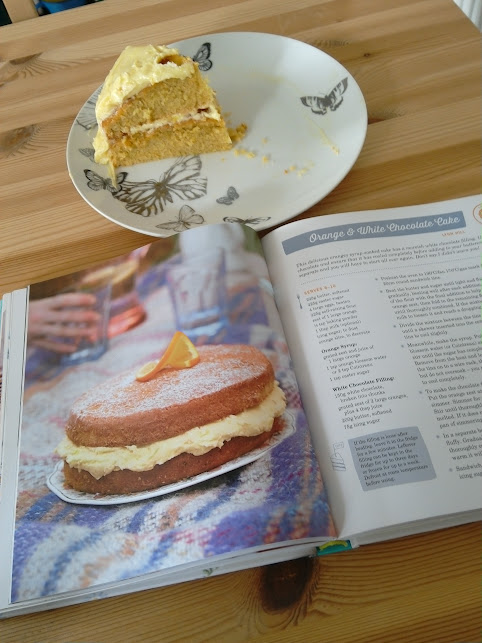 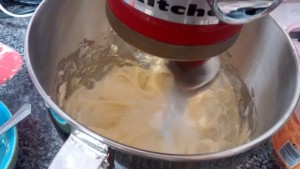 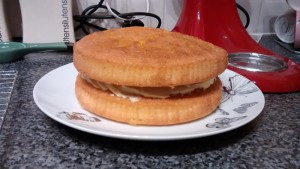 There’s cake somewhere under all that icing. 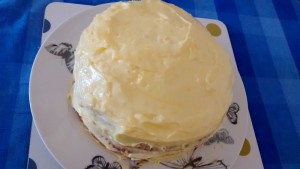 Are you a white chocolate fan?