So after our few days in Yosemite, we had a night staying near to San Francisco airport before flying out to Honolulu (on Oahu). With the long flight (just under 6 hours I think) and time difference (3 hours) we were pretty tired by the time we arrived, so as soon as we had checked in we headed out for dinner. Because we had been there before, we didn’t need to find our way at all, which really helped. 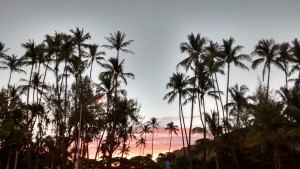 I was awake before 5am, but the thought of running in the city in the darkness didn’t appeal, so I got ready and headed out a bit before 6, and was treated to a beautiful sunrise. After a lot of stretching on the beach, I popped to Starbucks (it was at the bottom of our hotel) for a cold drink for me, and a coffee for Andy. 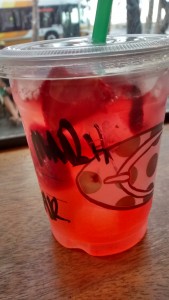 They have flip flops on their summer cups!

We did a lot of walking around the Waikiki beach area, and to a big shopping centre, as well as some relaxing in the hotel room. I still managed over 26,000 steps (although that did include my run). 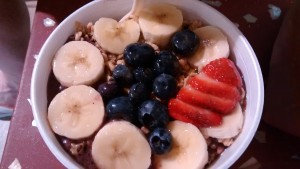 Without fail, every day our breakfast was an acai bowl from Island Vintage Coffee- so delicious and refreshing in the heat. It was 0.75 miles from our hotel (on my first run I measured it with my Garmin!) so it was good to stretch our legs first thing each day.

On our second day we got the bus to the bottom of Diamond Head, which is a small crater that you can walk up. It is pretty tough- there were warnings about how many people they have to rescue from it- it’s quite steep, plenty of switch backs, and there is little shade too. 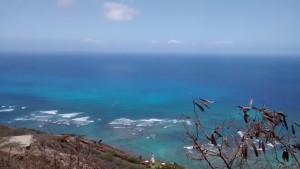 It was hot and sweaty walking up there, but the views made it all worthwhile. 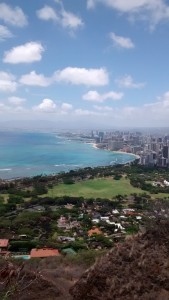 You could see all the way back along the coast to Waikiki. Over 18,000 steps walked, and lots of those uphill!

The next day we had hired a car for the day so we could drive around the rest of the island (last time we came, we had a car for the whole time, but it was expensive to park in the hotel, the roads were crazy busy, and we didn’t use it that much)- so after our usual breakfast we walked to the hotel to pick it up.

Last time we had driven to Pearl Harbor and then continued to the north shore before driving back, so this time we headed on a sort of anti-clockwise loop of the island, stopping when we fancied it. 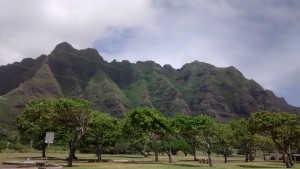 Here, we were near the big ranch where a lot of films (like Jurassic Park) were filmed. 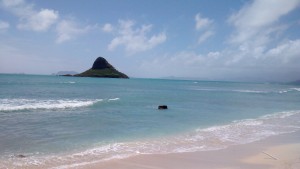 (Both of those photos were taken from the same spot. It was strange having the green rocks so close to the sea).

A little later we stopped near the north shore market place, which is just lovely for a wander, with lots of quirky shops, art shops and a famous shaved ice shop. I was most excited to see another branch of IVC, and although we don’t usually have lunch on holiday, we shared a sandwich- how could I resist this- toasted cranberry walnut bread, with peanut butter and fresh mango, served with a side salad. 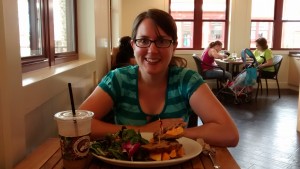 We had a wander and bought a picture (the same artist as we had bought on our last trip- Heather Brown– she has a really unique style), Andy got some shaved ice and we both bought some t-shirts there, before we headed back to the car. On the way back we stopped at the Dole plantation for a pineapple float. We were trying to get to the running shop for me to collect my race bits, but traffic was bad, so we just returned the car instead and left it for the next day. After dinner we were walking back along the beach and two runners passed us, both wearing different Hawaii running tops with pineapples on them- once we got back to the hotel I googled them and found that a running store a mile from  our hotel sold them, so I made a note of the address in case we had time to get there.

On our final full day on Oahu we got the hotel shuttle to the big shopping centre, as the running shop (Runner’s Route) I needed to visit was close by. Picking up the race pack was great- I was pretty relieved that there were pages of entries (as when I signed up, the entry list was something like 16 people)- and it was in a really nice running shop so I had a browse. I had left my visor at home (just hadn’t thought about it) so when I saw they had a few nice ones I bought one.  The store had loads of race t-shirts for decoration, so it was great to look at past Hawaii marathon tops and so on. The shopping centre is massive- we went past a Lululemon with a sale, so I had a look at the capris- I like short length ones and they actually did a pair that were the perfect length, so I bought some.

We could have got the shuttle back, but I wanted to see how to get to and from the race (it started at the beachfront park close to the shopping centre) so we walked the 2.5 miles back to the hotel, which was nice but pretty hot! When we got back to our hotel, our room was about to be cleaned, so we quickly got some water and then headed out in the other direction to the other running shop (Running Room) in search of the pineapple top.

In the end I was spoilt for choice- they sold it in different vest styles, t-shirts and long sleeved tops, in a variety of colours. I was very restrained and only bought one! 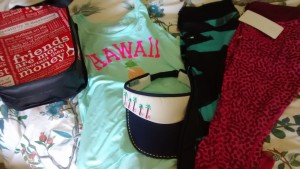 We walked out for dinner, and then to watch the fireworks (they have free ones set off by the big Hilton hotel)- we had walked over 23,000 steps that day, not bad.

The next morning was my race, so my alarm went off at 4.45am, ready for me to leave the hotel at 5.15 and run the 2.5 miles to the race start. Once the race was over, I picked up breakfast on my way back, and had a quick shower as we had a flight to catch- next stop, Kauai!