On Monday night my running club had put on an event at our local track. It was run by Jemma Simpson, who runs the 800 and 1500m, and had been to the Beijing Olympics, and was in association with Lornah Sports clothing.

We started off with a talk and the some warm ups. We jogged around the track a few times, then did lots of dynamic warm ups, strange ways of walking. Jemma told us some moves that meant we would not need to lift weights in the gym, doing various lunges, calf raises and other things. At one point we were even laying on the floor, trying to touch our toes to our opposite arms.

I was not the best at the “leaping” warm up…

Then came the session- it was a 3-2-1 session, and I shall try to remember it correctly!

We did that 3 times, and it was so tough! Especially because I set off way too fast for the 10K pace- it’s hard to judge. For each recovery we all regrouped, so that we started the next rep off all together. Jemma was running around with us encouraging us, and shouting “this is where the magic happens” in the final 1 minute sprints.

After we finished, we were shown a few pieces from the sportswear range (which is really gorgeous)- it’s a line by Lornah Kiplagat (she holds a few world records), who wanted sportswear that looked good, not all the pinks and fluorescent stuff you get generally. As her nickname was Simba, which is Swahili for lion, the logo is a lion, and lots of the clothes have things like lion emblems, animal print sections, or even the Kenyan National anthem words!

Then we did some stretches, were given some SOS rehydration packets and a bottle, and headed home. I didn’t get home until 9pm, so it was a late shower and a very late dinner, but it was just brilliant. Normally when I run with the club there are only a few of us there, but I think by the end there was probably about 30 of us. Some people did 2 reps, then sat at the side and cheered us each time we ran past. It was really different to our usual casual runs, but really enjoyable. 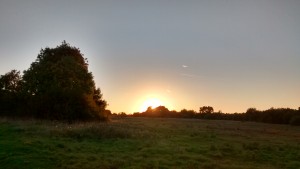 I was so stiff the next day though- my legs ached more than they do after Body Pump! I had to miss the normal Tuesday run as it was Andy’s mum’s birthday, but that was a very good thing as my legs were so sore. I had a wonderful sunset run on Wednesday to try to get the aches out, which did help, but then I had hours of work to do, so I was almost back to square one. Hopefully it will all be gone by Saturday as I have a 10K race to run!

The only time I had been on a track before was for the Sports Relief 6 mile event that I did a couple of years ago. Our club leader said she was looking into possibly getting a regular slot, which would be great.

Do you run on the track?