We had planned to put the decorations up on Sunday evening, after my afternoon tea, but then we booked cinema tickets (Sisters) and by the time that finished and we had walked home it was gone 9pm and we hadn’t even had dinner, so it was put back to another day.

On Monday I went for a massage after work (I am constantly told off about my awful stiff shoulders when running and after the sports therapist I used to use moved away, I really needed to start sorting them out again) which was “no pain no gain” according to the therapist! I was rather achy and ended up having a bath with epsom salts.

On Tuesday I felt awful- I didn’t sleep much and had a bit of a dodgy tummy which I hoped would be better later in the day, but it wasn’t, so I missed my running club and didn’t fancy decorating.

But, on Wednesday, after a gentle run outside, we had time! 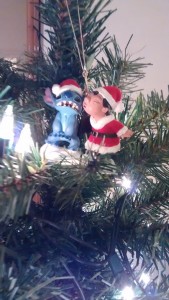 Hooray! We have our his and hers Disney ornaments! 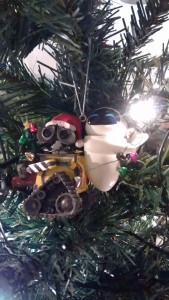 And a windowsill full of candle holders. 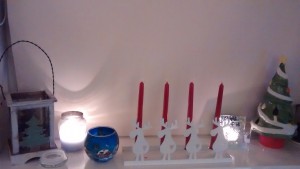 Despite an early-ish night on Wednesday, I woke up on Thursday with a headache (the day of the children’s Christmas party at work- not the best day for it!), and my stomach still felt a bit off, so I didn’t go to pump and just had a walk in the evening instead. I still managed 9,000 steps at work (before the walk)!

Friday, glorious Friday, was the last day of term. The children go home early, but the staff can’t leave until the normal children’s home time, but I made sure I was ready to leave at 3.20pm on the dot. When I got home it was not quite dark, so I headed out on a run across the fields (the new ones I have recently discovered, not the dog walker/ cow ones where  was freaked out by the weird man). It feels like such a treat. I love running, but all the roads near me are quite busy, so it gets noisy and also smoky, and isn’t always that relaxing. Running through fields and away from traffic is just so much better- that is the running that I really look forward to (another reason why I love parkrun so much), and even though it was getting dark, I decided to risk it.

The route was an out and back. I could have done a loop, but one part of that is by a very busy road which defeated the object really. 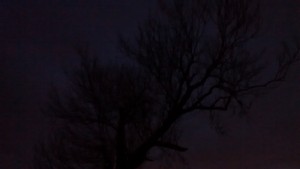 The route runs through fields close to a motorway, so the street-lights were helping to light my way a tiny bit. I did end up in a few puddles though, as I could see the huge ones but not the smaller ones! This tree was close to where I turned around. 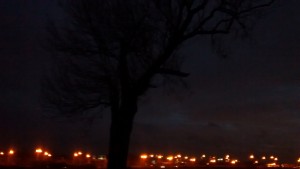 As I turned around I could see the oncoming traffic, which meant that when a cyclist came the other way, I didn’t realise at first as I thought the light was coming from the road! It was such a lovely contrast to be outside running instead of stuck in a car, and apart from the cyclist I didn’t see anyone else. It was so mild I had on capris and a t-shirt and was absolutely fine. Crazy weather!

This morning I was off to parkrun. I chose festive colours (green capris and my red 50 top, and a green buff to keep my hair back), and packed my “Merry Christmas” headband (it even has lights that flash). 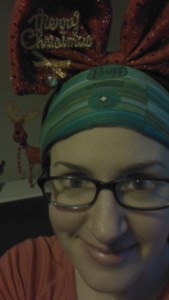 But it was so windy on the walk there that I left it in my bag as it kept blowing off. I did wish that I had packed my trail shoes as it was so muddy. By the end my shoes felt so heavy with all the mud stuck to them. The trouble is, my new trail shoes are a teeny bit big, so they rub the skin on one of my toes, so I generally just wear my normal shoes. I felt like I had run quite hard, but my time was 28.50, which although still under 30 minutes (my normal aim) isn’t close to my fastest. But then I told myself off- I have been under the weather and so very tired, and I still enjoyed it which is the point. 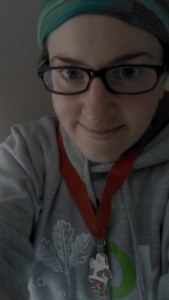 And it was week 3 of the Virtual Runner 5K December series, so this time I got to wear a Santa medal when I got home.

Also, in case you missed it, the second series of Serial has started! I am very excited about this, although I had to re-listen to the first episode as we listened to it on the drive back from Bath and I kept falling asleep!

I also have nearly managed to sort all my Christmas presents now. I had ordered a few “deliver to store” so picked those up this afternoon, but before I wrap them I am going to finally marzipan the Christmas cakes. I am feeling all festive now!

Did you listen to Serial? Are your decorations up? Do you have a work Christmas party?

6 thoughts on “The decorations are up!”