A few of my club mates signed up to the London Winter run this year- last year a big group did it and the medals were so pretty that it was on my list!

Whatever virus I had last week came back towards the end of this week, so I didn’t go to parkrun on Saturday as I wanted to be OK for Sunday, and not make myself worse. I was still feeling dizzy on Saturday but thankfully when I woke up this morning I felt fine. 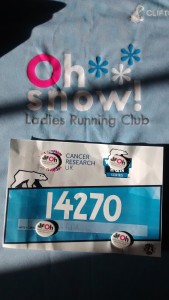 Last year the club made vests for the event, so someone passed theirs to me to wear, which I loved.

I had some toast, as it was going to be about 3 hours before we started running, and then we headed to the tube. It was a good journey- just 40 minutes and we were in Leicester Square, but when we came out it was drizzling.

We had about 45 minutes to spare before out (very specific) start time of 9.54am, so we popped into Pret as some of the girls wanted to use a toilet, and it was lovely to wait in the warm! We then headed to the bag drop, which was so well organised- the first one we reached was busy but the marshals told us that the next one along was quieter, so we went there, reasoning that it would be quieter at the end too. You had to use the official bag drop, which was a bit of pain because my big coat would not fit inside, so I had worn a long sleeved top, the snow (sn-oh) vest top, my parkrun hoodie (to go in the bag drop) and my running rain jacket, as I could tie it around my waist when I got too hot. So in Pret I had taken off my hoodie and braved the cold. It was still drizzly but we headed to the start and joined the long procession of people making their way to the start. They didn’t seem to be strict about start times, and even though we were in the pen in plenty of time, it took ages to get to the start line. They were letting people go in waves, and I think around 10.05 we set off, so not too bad.

I had hoped we would run as a group, as I thought it was that sort of event, plus I didn’t want to push hard as I had been unwell earlier in the week.

In the end, I ran the whole way with another girl from the club, and it was lovely, as we chatted the whole way around. She did tell me to go ahead a few times, but I was perfectly happy to run together rather than go a bit faster on my own. It was a good route around central parts of London, although it seemed to twist back on itself a lot (several times I thought we were running past people behind us on the other side of the barriers, only for us to turn and go that way!)- it messed with my sense of direction. Along the route were a few snow cannons, penguins (well, some people dressed up, and some big models of king penguins), snowmen (although they were way too skinny for snowmen), and an impressive drumming group which we passed twice.

There were loads of lovely marshals, and the St John’s Ambulance people were doing Mexican waves and cheering people on too- it had a great atmosphere. Despite the rain there were lots of people watching too, which always helps (but not too many for it to feel claustrophobic). The km markers whizzed by for me, as I was enjoying our chatting. It seemed that quickly we got to the “500m to the finish and polar bear hugs” sign- although I was not a fan of that idea, especially if it was a man in the suit and not a woman!

The two of us crossed the line together, and my club-mate Sarah was thrilled to see she had managed a 10k pb- awesome stuff! Despite it being busy, we met up with the other 3 within minutes of being given our medals, water and coconut water, so we walked back past Horse Guards’ Parade to the (nice and empty) bag drop. 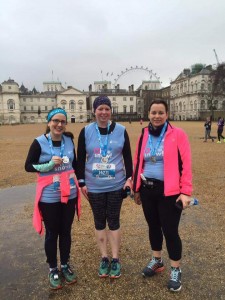 Photo from Louise- me and Sarah have matching trainers although hers are less muddy! I love this photo, because it was just brilliant to all go there together, and to run together- that’s what our running club is about- encouraging people to do their best, and to join in, and to have fun.

We had a photo with the London Eye in the background (most people had the same idea). I had packed tracksuit bottoms and a t-shirt as well as my hoodie, so I put the bottoms on over my tights, but my vest and long sleeved top were soaked so I took them off in the bag drop tent hoping no-one I knew would be looking!

There was a stage in Trafalgar Square set up for medal photos (with a sign that said “10K pb”) and I did suggest it to Sarah, but as the queue didn’t seem to be moving we left it, and headed to Pret for a hot chocolate- my hands were freezing and I had wished I had worn gloves. Anyway, after warming up, we headed straight to the tube (where at least it is warm) and then drove home.

I really enjoyed it- it was a very flat route, although a bit twisty in places, but you could get a fast time as it was wide and never felt congested. The medal is so pretty, it was very well organised with signs and marshals everywhere. But it was expensive, so I am not sure I would sign up again (unless a group of us did it again). I do think they could have done with foil blankets at the finish, as although it wasn’t a long walk, it was a cold wet day, so I got quite chilly before getting back to the bag drop.

It was also for a great cause (Cancer Research UK)- they even had a mention of this at the start, so if you would like to sponsor me, you can click here. 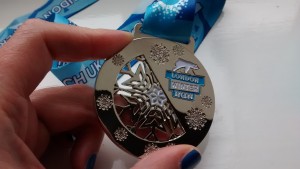 Such a pretty medal! (And blue nails to match of course) 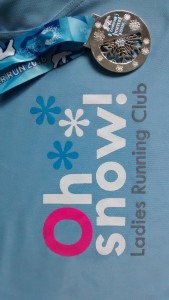