This weekend I was back at my home parkrun of Panshanger. I had volunteered to tail run a while back, because I have a 10 mile race tomorrow, but it worked out even better as in the week I got a bit of a virus, or something. On Tuesday I went out for a run with the OH ladies- we did the shorter route of around 4.5 miles, and it was so cold, and I really struggled to keep up (although looking at Strava, it was still 9ish min miles). By Wednesday lunchtime I was aching and had no energy, and had to go to bed once I got home instead of running. I still felt bad on Thursday so cancelled my Body pump class, but luckily on Friday felt pretty much normal (although no time for a run as we were travelling down to a funeral). Anyway, a tail run was just what I needed as it meant keeping it nice and steady. Or just walking in the fresh air.

My dad and brother were running, and had said they would wait for me (they are so good) but we cut it a bit fine, arriving at 8.45! Luckily I could be the last runner to leave. I had a nice chat with the run director, and also my running club leader (she was time keeping- that must be so stressful- one of the tasks I have not tried yet), before collecting the high viz jacket and bag, and heading to the back. 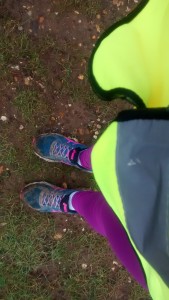 Even after they had said “go”, I could see people running into the car park starting area, so I had to wait for a bit before running behind them. I then got a little cheer from the time-keepers as I went past!

Soon I caught up with a couple of ladies who were power walking, so I hung back a bit to give them space as they seemed to be together. I never know how much encouragement people want or need. As you have to collect the signs, I kept having to pop to one side or the other, getting the arrows and km markers. Each time I reached a marshal, I would tell them I was tail runner (just in case they could not tell), and so they would head back to the start while I carried on. In a few places I stopped to take some photos, before jogging to catch up. 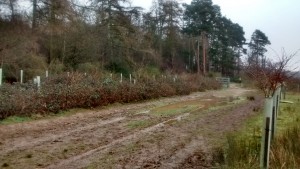 This is the highest point of the course, before the first km marker. It’s very muddy right now! 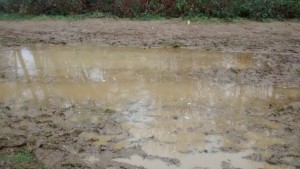 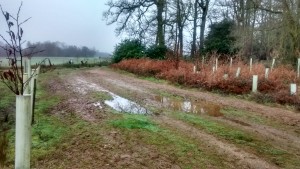 At about 2 miles, the ladies overtook a man and his son, so I ended up chatting to them a bit, and encouraging the boy to keep on going.  That was really good fun, as he was quite chatty to me, and I felt like I helped as he was worried about being the last one, so I explained that that was my job, and unless he volunteered to do it, he would never be the last one. He walked quite a bit, but once we could see the finish hill, he started to run, and properly sprinted up the hill- I was very out of breath when I finished as I was trying to cheer him on a bit too. I like that side of tail running, although I think marshalling is easier to be enthusiastic as people pass you by- I worry that the people near the back would get annoyed with constant “well done, keep it up” etc.

That was my 59th parkrun (and actually, 60th, as I was a tail runner once and didn’t take a finish token- ah well). Time 54.54 (love the repetition). My brother did brilliantly- he managed his first sub-30 minute parkrun on Christmas day, and today managed 25.28! Now he’s faster than me! 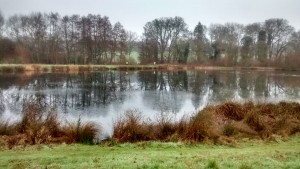 There was ice on the lake, and some huge icy puddles on the way around.

After handing the bag full of signs back, we headed off as I had to be back to finish tidying up, as we were having an open day for our house. That was a bit weird as we had to vacate for the estate agent to show everyone around. We went into town and got some late lunch (we shared a really lovely goats cheese panini and gingerbread muffin in Caffe Nero- so good), and then we had booked a viewing so went to see that house, before heading back home.

Now I am off to make some pear crumble, and to paint my nails as my pre-race ritual. Hope your weekend is going well too.