Earlier in the year I was sent some research from Jabra about 2016 being The Year of Stronger, Fitter and Faster:

It’s that time of the year again when millions of people vow to turn over a new leaf by making their New Year’s resolutions. Global research* by Jabra has today revealed that more than 40% of people are resolving to make their bodies stronger and fitter in 2016, rather than opting for more traditional resolutions of just focusing on weight loss.

With over half of people surveyed (52%) admitting that they have never made a fitness related New Year’s resolution before, 2016 looks to be the year of first-time resolutions with people focusing their attentions on a healthier and fitter lifestyle. 2015 has seen a healthy shift away from the traditional ‘thin’ celebrity images depicted in magazines, to the more favourable ‘fitspiration’, ‘real body’ trends led by social media channels such as Instagram.

This refreshing shift in attitude reveals an increasing emphasis on strength and fitness training and dispels the notion that most people either won’t make a resolution, or will simply fail to reach their goals. Teamed with growing confidence, 67% of people feel completely confident that they will stick to their fitness resolution. A determination to succeed is clearly evident with 45% admitting whilst they may take a few breaks, they will still ultimately accomplish their goals.

Finding and sticking to a New Year’s resolution is no mean feat, motivation is clearly the key to success. Over 35% are motivated by music with a further 34% saying that the buzz they feel post-workout is what inspires them most. To succeed, 68% revealed they would almost certainly consider investing in some sort of technology to keep them on track. 57% would most likely purchase new sports ear phones and 39% would invest in a fitness tracker or GPS device.

Karin Piscitelli, Marketing Director at Jabra, said “The research is clear. Globally we live in a culture where staying motivated is the key to success. Whether people opt for training apps or upbeat music, finding that inspiration to suit you is key. What is really positive is that people are already willing themselves to succeed, particularly when their goals are related to health and fitness.”

Karin Piscitelli continued, “As we begin a New Year, more and more people are opting for fitness-based New Year’s resolutions. In order to succeed, it is crucial to retain focus whilst setting realistic and achievable steps. As a company, Jabra provides integrated training solutions to help people with motivation, personal training management so that they can keep track of their goals.”

Jabra has conducted this research to prove just how much sound and hearable technology play a part in people’s fitness and training goals. With motivation the key to success, an overwhelming 82% of people surveyed reveal that they currently use some form of technology to assist them when they work out. The majority (69%) utilise music through in-ear buds to spur them on, 33% use some form of fitness tracker/GPS device, 26% use a heart rate monitor and 27% use a running or training app.

Features such as heart rate monitors (Jabra Sport Pulse Wireless) and motion sensors (Jabra Sport Coach Wireless) combined with the Jabra Sport Life app, can significantly enhance any workout. The free app which has been developed by Jabra, offers the ultimate all-in-one solution and contains optimised tools to help plan and monitor your fitness. Whether you’re a casual gym goer or a seasoned triathlete, there is a headset to cater for your workout needs. Designed to US military standards and leading the market in audio fidelity, Jabra’s innovation enables you to hear more, do more and be more.

As a result of this research, Jabra has initiated a new online community (the Jabra Fitness Community) to further support those that have set a fitness or training goal for the New Year.  In addition to their portfolio of products, Jabra will be offering motivational and inspiring tips for success from fitness and training professionals, as well as highlighting “real” updates from those in the Community who share their progress and highs/lows.  The Jabra Fitness Community can be found at: http://thisiswherewestart.jabra.com/ and posts can be made to #thisiswhereitstarts.

The website has some articles about working out as part of a group, making goals manageable, as well as photos submitted by users (and the chance to win headphones too), so it’s worth a look.

They also sent me some Jabra Sport Pulse headphones to review: 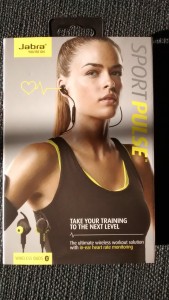 The set up was simple enough (this may sound silly, but I am not very good with technology and often have to get Andy to help me with setting things up)- they work via bluetooth, so after turning the bluetooth on my phone, and entering the code on the pack, they connected (and if you put the headphones in, you can hear a voice telling you “Jabra sport pulse connected”). 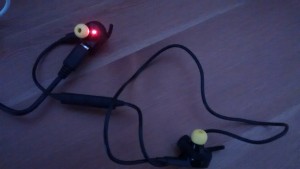 They charge by a little USB wire, which is hidden behind one of the ear buds- the light goes green once charged. I have never had headphones that need charging, but according to the app they will last for 4 hours, and I took them on my accidental 15 mile run last Sunday and they were still going when I got home, so for me they would last plenty of time for my longest run.

I had to download two apps- one was the Jabra music one, and the other was the Jabra sports one, but these were easily done via the prompts on my phone screen. I am not 100% sure I needed the music one, because I mainly listen to podcasts via the Pocket Cast app (which is amazing by the way), and it connected fine via that app.

At first I used them as I use my normal headphones- on a walk, or on a run, just to listen through. I turned on the bluetooth on my phone, turned on the headphones (there is a little button on the wire) and then played my podcasts. I had to take the headphones out to check it wasn’t coming out of my phone too, but it wasn’t. Clever stuff! I do love the lack of wire- on my walks I just had it the small wire in front of my neck, but on runs I have tucked it behind, under my ponytail, and it’s been really good. I didn’t get particularly annoyed with the long wire on my old ones, but it would get caught on my arm sometimes, plus when using my flipbelt I would have to flip the same way otherwise it would get wrapped around and around the belt.

I did swap the earbuds for a smaller size after a few wears- they come with 4 different sizes (although the small and extra-small looked the same to me!)- the fact you have so many sizes is great and although I was worried about swapping them, they were easy enough to pop off and swap over.

After a few times, I used the Sport app to track my heart rate. This was so clever! When you start the app, it detects your heart rate and the voice in your ear tells you your heart rate, and once you press “start” it counts you down to go. You the start the app, and it runs while you are exercising. I tried it on a walk first, as I didn’t want to have to stop and fiddle on a run if needed. When I set it up, I selected metric (as you add in your age, height and weight), but I need to go back and change it, because it is now set to kilometres, and I prefer miles.

At each km a voice would tell me heart rate, distance, pace, speed, cadence (steps per minute)- it was interesting hearing my heart rate, although the first one was a walk to Tesco so it slowed a lot as I wandered around inside the shop. I think it tracks using the location of the phone, because when you get home and stop it, you can open the app and look at your history, and it shows you a map of where you went, and gives you detailed splits for each km, what your heart rate was and so on. As my Garmin does not have a heart rate monitor, this is really interesting information to have. You can even see a graph of your heart rate, and not surprisingly it went up for me when I had to run through a field of cows! 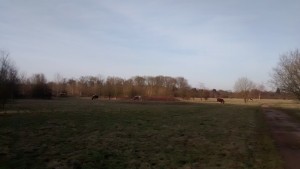 Some of the cows were very close to the path! I took this once I was safely through the gate at the other end!

The one drawback is that the voice is very loud, and it does take time to get through the list of stats after each km, and at times when I was listening to podcasts it would be a bit frustrating as I would be trying to hear what was being said, but all I could hear was my heart rate, distance, pace and so on. But once I got home I looked in the settings and turned off the “on the go readouts”, although you can just turn off some, and keep some (for example I might sometimes keep the heart rate one as I find that interesting, and I could not get that information from my watch). Once I tried them again, I didn’t have any audio updates, but was still able to look at the map, graphs of my heart rate and so on once I got home, so for me I will probably leave it like that for most of the time as I prefer to look at the data once I have finished.

It does occasionally drop out too, I think when my phone is updating or doing something else, as it tends to happen at the start of my run, but it pauses the podcast for the split second of drop out so that I don’t miss anything. Not having used wireless headphones before I imagine that this is to be expected every now and then.

Also although I have swapped the earbud size over, I am not sure that I have the correct fitting just yet (they also have ear-wings to hold them in place, and again include 3 or 4 size options)- but as it’s been so cold I have been wearing a headband over my ears, or a hat, so that has held them in place. 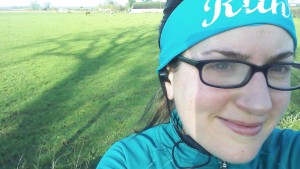 I was trying to work out how best to show the earphones- you can see the headband is sort of holding them there for me.

I think they are great though- the fact they can measure your heart rate is just so clever, and if I didn’t already have a GPS watch for running, this combined with the app does pretty much everything a watch does.

So thanks to Jabra for letting my try them.

Do you measure your heart rate when you are training? Do you think that technology can help with motivation and keeping your goals going?

If you are a podcast listener, which are your favourites?

*Sent to me in exchange for a review. As always, all opinions are my own.