I am pretty glad the month is gone. January always seems to drag, and this year I have had a few viruses/ illnesses which have disrupted running and gym plans. 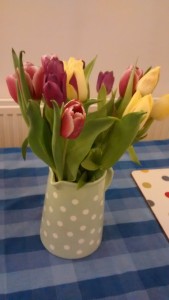 But things have been generally good (I like to look on the bright side). Following the Wholeheartedly Healthy bootcamp, I bought myself some pretty tulips the other week. We are trying to move house at the moment, and hosted an open house (seems to be the way things are done now) so they brightened it up a bit for that too.

Running has generally been going well. I have the Brighton half in my sights, and my plan is to hang on to the 2 hour pacer for as long as I possibly can. Last year I ran it as part of my marathon training, and I managed 2:04, and felt like it was hard but comfortable. I didn’t want to push it too hard as it was not my “A” race, and I didn’t want to spoil a week of training. But on the other hand, I would love to do one half under 2 hours, and I hope that wasn’t my only chance.

I have tried to keep the training similar to last year, and looking at my Strava I have not done too badly. I did the Fred Hudges 10 mile race in a fairly similar time to last year, but last weekend I did the London Winter Run 10K, whereas last year I did a longer run. I’m consistently going to the Tuesday night club run, trying to do a hill session on a Wednesday (run 1.5 miles to the hill, run up and down 5/6 times, then run home- not that hilly but where I live is very flat, plus Brighton isn’t hilly at all so I am not too worried about that aspect of it)- I’ve only managed that a couple of times so far, but I still have 3 weeks to go. I have not managed Body Pump every week, again due to being ill, and although I have been the last 2 weeks, I can’t go this week due to work. Then it’s been a parkrun on Saturday, and a longer run on Sunday. Last January I did 98 miles, and this January I did 83 miles, so a little less, but I did miss a couple of Wednesday runs, one parkrun, and did the 10K instead of a longer run, so I feel like I am fairly close still.

I think one thing that helped me was going over the half marathon distance in my training- it was a bit of a cut back week, so I am doing 12 miles tomorrow, and then the weekend after hopefully 14 miles. I will see how I feel for the final long run- I think last year it was 16 but that seems a bit far for half marathon training, so I shall decide nearer the time. 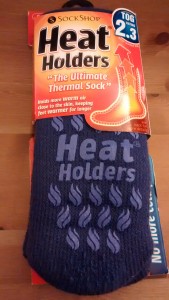 My mum bought me these amazing socks (I think it”s the third pair she bought me as she knows I get such cold feet- I used to get chilblains a lot- one lot got infected and that is very painful indeed)-they are so thick that I can’t wear them under shoes, but for around the house after a long run they are just the best thing ever.

Speaking of running in the cold, I was kindly sent a kit to help me with winter running: 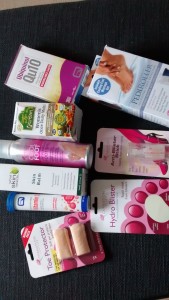 It contained plenty of goodies including Carnation Footcare foot lotion and a foot roller, What Skin Needs super moisturising skin cream (I love this- I get such dry skin and my hands get so sore, so I have been putting it on my hands before I go out running in the cold, and it really helps), vegan multivitamins, Ubiquinol Qu10 by Quest Vitamins, effervescent vitamin C tablets, Nature’s Plus Source of Life Garden, toe protectors and blister plasters. I had to use the blister plaster after Fred Hudges as my shoes gave me a weird blood blister thing on the side of my big toe- I think my sock had bunched up as the trainers have been fine since. 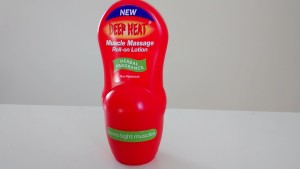 I was also sent some Deep Heat in a roll on bottle, which is loads better than the cream as I hate getting it on my hands. I used some last weekend, but it seems stronger than the cream- I rolled it on, waited, and then the burning came! It was OK, but since then I have tried to use a little less at a time as I think it takes a while to warm up. It has a herbal scent too, which I prefer to the traditional one.

Tomorrow morning is a 12 mile run with some of the girls from the club- I am looking forward to it although I hope the wind and rain will have stopped, as parkrun was tough in the wind, and now the rain is pouring down, it’s not that inviting!

Do you have any essential running kit?

*Items sent to me, but all opinions are my own.

5 thoughts on “So that was January!”