So, last weekend after my parkrun pb I spent the afternoon pottering at home, having a walk and catching up on some work. 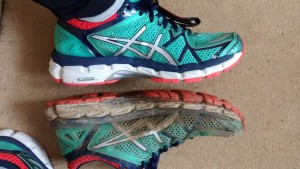 On Sunday I finally broke out my new trainers- these were my parkrun Sweatshop prize from back in the summer- the same style that I was already wearing. Strava keeps reminding me that I have run over 500 miles in them (more like 600 I think) and for the last few long runs I have started to feel that my feet are aching a bit more, but I didn’t want to change them before Brighton just in case. The old ones were not too badly worn on the sole, although on the outside they are a bit, but I think it’s the padding inside that has slowly been flattened and they do feel much bouncier.

I had a 10 mile route planned, so although perhaps I should have started with a smaller distance, I thought it would give me a good idea for the half next weekend. 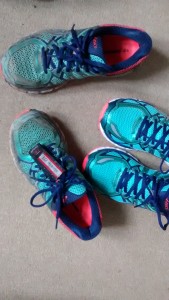 It surprised me how faded my old ones look now!

I could not decide what to wear, and ended up in a t-shirt and long tights. I started off so cold- it was very misty and my hands were nearly numb, I was wishing I had brought my gloves. About 5 miles in I stopped to briefly text Andy as I had forgotten to get the hot cross buns out of the freezer (priorities!) and I got really cold only stood still for a minute or so. But later on the sun came out and by the end I was very warm and glad I had not opted for anything more. 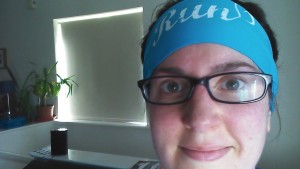 My post-run red face is returning and spring isn’t even here properly yet! I felt good though- it wasn’t my fastest long run by any stretch, but I felt like 2 weeks after Brighton I was back to normal and had not lost the endurance fitness in that time. I think 10 miles is the perfect training distance- done in under 2 hours but long enough to feel like I have earned a bit of a relaxing time after, and to have those post run endorphins going.

I had some orange slices and then a shower, and then we had a lovely breakfast of toasted hot cross buns and IKEA marmalade (with elderflower- it’s very nice), and of course tea.

Cake (the epic one)

Then I got to baking. I have not used the new CCC baking book as much as the old one, as the recipes are more complicated, and more like special occasion cakes than normal Sunday tea cakes. They had a peanut butter chocolate fudge cake in there, so this week I had bought the ingredients. 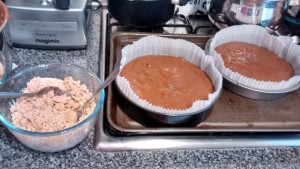 Basically it was a sort of red velvet cake batter, which is so much nicer than normal chocolate sponge which can be dry, with chunks of dark chocolate in the batter. Then you made a peanut butter filling and sprinkled that in the middle of each chocolate cake. 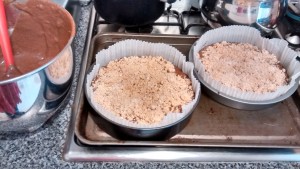 The cakes ended up being huge! The recipe didn’t seem that much bigger than normal cake recipes for baking in 2 tins, but this was epic.

It was meant to have a chocolate fudge frosting with various ingredients including evaporated milk ( or condensed milk, I can’t remember) but I thought it would be way too rich. On Saturday I made some pumpkin cupcakes for work, and had bought some cream cheese for the frosting, so I made a vanilla cream cheese frosting instead, which complemented the chocolate instead of overpowering it I felt. 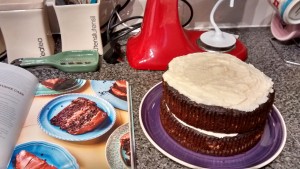 It would not even fit in my biggest tub, so I had to cling film it and carry it while Andy drove (we went to his parents) and hoped that he took the corners nice and gently! It was good but oh so rich. And huge- we sent slices home with everyone as there was so much left over! One for special occasions I think. 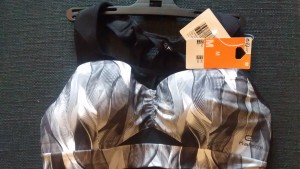 I was sent this Kalenji sports bra crop top to try out. I love how it looks- they had a few colours but I liked the grey/black/white combo. The shape of it is much nicer and more flattering than the shock absorber RUN bra I usually go for. It does say it is suitable for runners seeking comfort and support, and I would agree that it is very comfortable. However I would not try it for running. I wore it to a Body Pump class, as I need a sports bra but I don’t like ones with clips on the back of the neck as that is where the bar rests. We don’t do much leaping about (the only thing in this release is where you hold a plate and do squats and then lift the plate above your head- things wobble during that move!) so it is always good to try clothes out here before trying them running.  I would wear it again for Pump, and really like it for that, but even running from my car to the gym (it was so cold) I had to run with my arms in front as otherwise things were moving too much. I suppose partly it’s because of the size- I think I chose Medium, which isn’t very specific. I am not sure if I would find a smaller size more supportive, but I can’t see how it can fit properly when it is just a small/medium/large sizing. Anyway, I love how it looks and it has washed well so I will be using it for other sports, just not high impact. 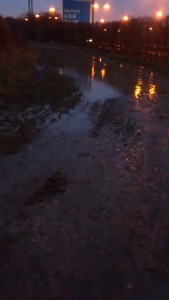 Last week on one evening run I went on the fields as it was still just about light when I got home. The loop goes along the road first, and then ends up on the fields. I didn’t quite realise how much water there would be- the puddle was still huge. 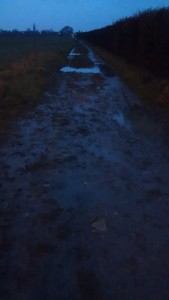 Also along the final stretch I didn’t realise how deep some of the puddles were and ended up with cold soggy socks. 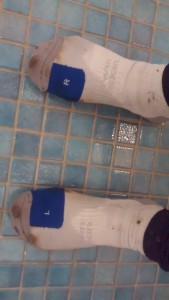 And muddy socks! I am always surprised by how much mud gets through my trail shoes.

This weekend I have my 13th half marathon- the very local Welwyn Garden City one. Lots of my club mates are either running or marshalling so I am looking forward to a more social run- no time pressure, I just want to enjoy it.

3 thoughts on “A long run and an epic cake!”