I hope you are all enjoying the 4 day weekend. On Friday I took part in a virtual run organised by some girls from the club- they are raising money for a charity for their London marathon places, and one of the events they did was this virtual run. They were running 22 miles, and so they had posted the route online and people could join them for part of their run, or meet them at various points to cheer them on/ give them jelly beans, or just see them at the end. I had not run since the half marathon- not even on our playground jogs at work as my back and ribs were still sore. But on Friday I felt a bit better so went for a very slow run. I had planned to meet them by the fields, and would run out and back. I was there a bit early and initially ran out onto the fields but a dog off a lead saw me head back to the road! I did some squats and jogged on the spot to keep warm, as it was rather chilly. 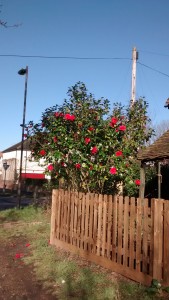 I took some photos too as it was a gorgeous day.

The sight of a huge group of runners was fantastic to see- lots of people had turned out to run the first part with them, and I did feel tempted to carry on but I knew I had to be sensible. By the time I got home I had been out for an hour, but had run 4 miles. Not bad I thought, and other than being cold I felt fine. 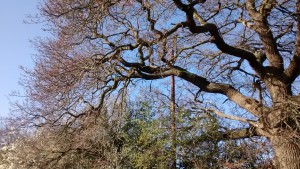 Then it was time for hot cross buns for breakfast. 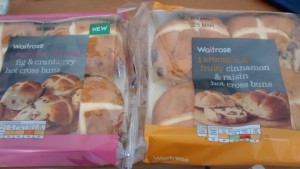 As it was the best day, weather wise, we headed into London and ended up walking for miles. We got off the tube at Camden, walked up Primrose Hill for lovely views across London. 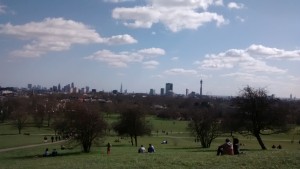 Back down the hill, through Regents Park, along Oxford Street, stopped at Leon for some lunch. Carried on to Hyde Park, and then finally to Leicester Square where we got back on the tube to come home. We were shattered after that!

On Saturday both my dad and brother were going to parkrun- my brother has been ill so has not run for ages. As me and Dad were doing (hopefully) a run on Easter Monday we were all taking it easy. I enjoyed it although my back and ribs were still sore on the steep hills, and I felt I was being extra cautious with foot placement to avoid falling. I finished with a slow time (for me), but second in my age category- normally I am around 4th. It was the joint biggest turnout with 318 people, so it was weird to be higher up in the placings. 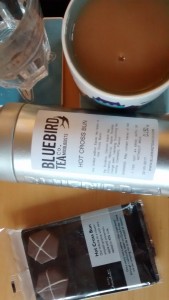 I was excited that a parcel from Bluebird tea had turned up- last year I won some of their hot cross bun tea, and when we were down in Brighton I had a look but their Easter teas weren’t in the store at that point. It’s rooibos+ black tea with spices and citrus peel- so delicious. We had treated ourselves to some Hotel Chocolat hot cross bun chocolates too- notice a theme?

Anyway, after parkrun I had some work to do (this is not unusual) but when I got up my hip was so stiff. Walking was a challenge and later I hobbled around Sainsbury’s. It was still stiff on Sunday, although a bit better, so I started to think about watching instead of running the 5 mile race on Monday, which did make me feel very fed up. But that’s for another post.

Are you a hot cross bun fan?  Did you have a good weekend?