That felt like a long week- hooray for the long weekend to make up for it!

This week running has been going well. I had a lovely 9 mile run on Sunday morning- I decided to not set an alarm and just headed out a bit after waking up to warm up a bit, and although it was cold (I wore gloves and a t-shirt) I warmed up just fine and was even thinking about smoothies on my way home.

On Monday I went for a back and shoulder massage which was just what I needed- the lovely masseuse kept apologizing to me as she was pressing certain parts of my back, but I felt so much better afterwards.

Tuesday was a lovely OH run- we did just under 4 miles and it was lovely to chat with people as I ran and I felt much better than the previous week (I had struggled to keep up with them and at times only caught up at traffic lights and things). 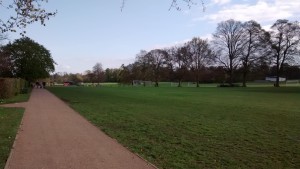 I thought this was from my run but I think it’s the park we walked around last weekend. I have done the parkrun there once, so it can stay in!

Wednesday was a rest day (trying to not run on consecutive days at the moment, although that plan failed….) so we walked up to the cinema in the evening to see The Jungle Book- I didn’t think about going to see it until I heard the great reviews on the Kermode and Mayo film podcast, but I really enjoyed it- I was humming songs from the cartoon version all of Thursday!

Thursday I had a 4 mile run after work- it was so windy it felt like I was running in treacle, but it was good and I got some miles under 10 minutes. I’m still worrying about tripping though.

On Friday our running club were hosting Ben, the guy who is doing 401 marathons in 401 days to raise awareness for anti-bullying charities.  I first heard about him on marathon talk (of course- that’s where I get most of my running news from)- the interview is here, or you can see his website here. So the club had sorted out his route around Hatfield and Welwyn, and were aiming to finish by Hatfield House at around 4pm. So my plan was to leave work as close to 3.30 as possible- I got everything for Tuesday ready at lunch, and packed up all the rest of my work and shoved it in my boot. I got to the finish point, only to see on facebook that they were a bit behind schedule as lunch had taken longer, and as luck would have it in 15 minutes would be running close to my house. I deliberated for a minute, and decided to chance it. I drove home, raced inside, changed (and noticed a weird red rash all over my chest which I think was from panic), left them a message to say I would be by the shops and sprinted off. I got to the shops, and saw a message saying they would be by the school before the shops, so I leisurely headed up the road to meet them. I waited for a bit, and then tried to work out where they would be as when they last posted they were only 1.5 miles away. I looked on facebook again and it turned out I had missed them. I started running back to the shops- I think if I had waited there I might have caught them, but I was now further away. Then I got to the Hatfield House entrance and no-one was there. I left another message, and they told me they were at the stable yard- I had no idea how to get to that bit and I don’t have a pass (it’s a bit complicated, but there are two entrances, and one you need a pass for, and the other you don’t, but the one that you don’t need a pass for is tucked away and there’s only a road, not a path). Anyway, one of the club ladies happened to run past- she was the one who had organised the route, and Ben had left his van at her house, so she was going to collect him and drive him to her house. She offered to drive me to the right place very kindly! When we got there he was busy taking photos with lots of children, and because I had not run with him (and also I am just very awkward around famous people or people I don’t know), and finally because he was running a bit late, I didn’t ask for a photo, but I did say hello at least! 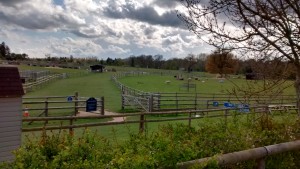 There were lots of my club mates around, including my lovely run leader who ran the London marathon last week, so I had a chat before phoning Andy and asking him to pick me up. I could have run home, but it was a couple of miles and as I was doing parkrun in the morning I didn’t think it was sensible to do 3 runs in a row of that sort of length.

So, if you don’t try, you’ll never know. I think I am glad I tried to run with him as if I had waited around I was in the wrong place anyway so might not have even seen the finih their run- navigation and reading maps is not my strong point! Everyone had only good things to say about him. I love how he encourages people to run further than they thought possible. Apparently one lady had only ever run 12k before, but ran the whole marathon with him- amazing!

Is he coming to a town near you? Or have you been lucky enough to run with him? Who inspires you to keep going at something?