I was really looking forward to this weekend! Today our club members (and friends and family) were all invited to the final tester event of our new parkrun, before the inaugural event next weekend. It didn’t start until around 10am, and would not count towards our parkrun totals, so when I mentioned this to Dad we decided to aim for a parkrun double (like they do on New Years Day). We would go to Panshanger (9am start) and run it, then jump back in the car and head to Hatfield for the 10am start.

We got to Panshanger with plenty of time and managed to park fairly near. They have slightly changed the start and finish now, to try to ease congestion. The start is narrower which I think in theory should help, but we started fairly near the back as we wanted to take it steady, and we had a lot of stop-starting still. We chatted the whole way around and enjoyed it. The change to the end meant instead of running straight up the hill, you run diagonally up the hill, turn, and run diagonally up to the finish, facing the opposite way. We finished (31.08 and 31.09) and I was surprised to see my token number- 248! I think that is the highest number/ lowest placing I have ever been. It was very busy, and we found out later it was another record attendance of 396 runners. We then joined a queue to have our chips scanned and the queue seemed to be moving very slowly- the lady on our queue was having trouble and needing to scan each one several times- normally not a problem but we had places to go!

We got back to the car at 9.45, so headed off asap! Because the actual car park is reserved for volunteers and other park users, the parking listed on the course page is a side road- I was quite shocked to see how many people had double parked (including some people in a massive van)- it made it quite tricky to leave and my dad does not have a big car.

I had told the club my plan of a double, and I messaged them to say we were en route (they said they would wait- phew!). We got to the car park at about a minute to ten, and then ran the short distance (couple of hundred metres maybe) to the entrance to the field. We passed the finish area and one of the marshals gave a massive wolf whistle to the people waiting further up at the start line so they knew we were coming. Luckily some other people were just parking up so we weren’t the last! Dad had not run a 10k for a few years (although he did the 5 mile on Easter Monday) so we aimed to take the second one steady too. The RD had a quick reminder of the rules and briefly described the course, and then we were off! 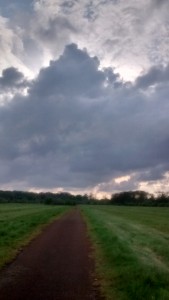 Taken on my run on Wednesday- I loved that huge cloud- this is the path towards the field of cows.

The course itself is lovely- I often run around those fields anyway, and it was basically a short loop at the start, next to a sort of river bed, before doing a big loop of the fields (through the cow field- thankfully they weren’t there today, but they might be some weeks), and then finishing along the old taxi-way. Very flat, although the ground was rutted in places so marshals were warning us to mind our ankles. It was great to run around- I knew most of the marshals so it was good to have a bit of a personal cheer, and again I ran with Dad so we kept up the chatting. We did consider a sprint finish down the taxi-way, but then the wind was so strong we didn’t think we would manage it. However, when we were close to the finish we decided to go for it as everyone was cheering! 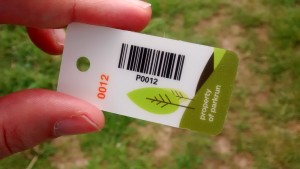 I was number 12! My highest ever placing! I mentioned to Dad that I had managed my lowest and highest placing in one day! Impressive! We didn’t get an official time, but the results were uploaded and we were sent a screen shot- we finished the second parkrun in 28.55- not too shabby!  We hung around for a bit afterwards, chatting to the other runners and volunteers- quite a few of the Panshanger team were there supporting. We were even recommended a few other fairly local (e.g. 50 minute away) parkruns that we will need to add to our list.

It did confirm my thinking that I should not attempt the Panshanger/ St Albans double, as we only just got to Hatfield for 10am, and St Albans is another 15 minutes from there, so it’s only for the speedy runners.

I did though get confused over my Garmin and Strava. I don’t use Strava on my phone, I use my watch and upload it to Garmin, which then transfers the data to Strava. This usually works well, but I had a problem before when I did two runs in one day- even though I press stop between runs, it seems to keep going. 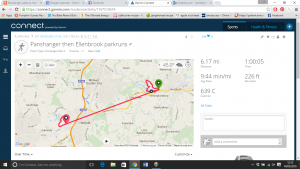 So my Garmin one had me running 6.2 miles in 60 minutes (pretty much bang on compared to my parkrun times). 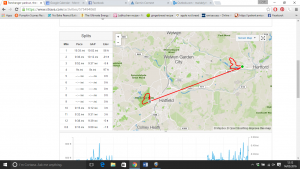 But the Strava had me running 13 miles- in the middle they have no pace because I turned the watch off. I had a look at this before but you can only delete the beginning or end of a run- not a chunk in the middle, so I guess I am leaving it. It sort of annoys me because it messes up my monthly mileage (although we are going on holiday at the end of May and there will be no outside running for fear of lions, but the hotel does have a treadmill so perhaps I will try to run those missed miles then so it all adds up in the end?), and also my pb’s- I now have a 10 mile pb of an hour! I will never be beating that!

Next Saturday is the official first one and I am looking forward to it already! I loved the course, plus it is only a mile from home so my aim is to jog up there as a warm up. Although we are moving house the week after, so I’ll only get to do that once, then it will be back to driving again! 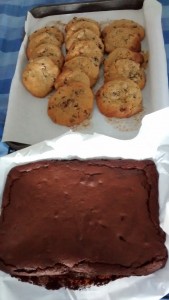 This afternoon after a little walk around town I did some excellent report-writing procrastination, otherwise known as baking (using up ingredients so we don’t have to pack them)- orange and ginger brownies, and peanut butter, cranberry and chocolate cookies.

8 thoughts on “A parkrun double!”