So we had a bit of a stressful week- moving house on a Tuesday is not the easiest of days, needing work things right up to the last minute, and the day after. It was made a bit more stressful because on Friday night after work we were flying to Cape Town! It was a bit of a last minute trip, as Andy needed to go there to meet some colleagues. As our move was meant to be the 12th of May, and he was able to combine the trip with some leave (if he wanted to, so I could join him), we booked it for half term (only at the end of April I think- very last minute for us!). Then our move was moved back one week (20th), and then again to the following Tuesday. We could not have moved much later! It meant we packed as much of our holiday suitcases before we moved, so we were not frantically trying to find things in boxes. Although my little tube of germoline went missing, and at Heathrow my bag was not accepted in the x-ray machine as there was something there. Turns out the tube was right in the bottom of my rucksack- no idea when I put it there!

Anyway, the flight was really good – it was 12 hours overnight but we had the exit rows which meant lots of leg room. It didn’t take off until 10pm, and after a busy week we were both shattered and went to sleep straight away. It is only one hour time difference which really helped- no jet lag!

After a quick change in our B&B, we were off to Table Mountain. You could hike, but it looked steep and we didn’t have that long, so we got the cable car. We had a long walk around at the top, admiring the views.

After heading back down we were being picked up by Andy’s boss, who was taking us (along with other people from his company) out to dinner at a vineyard. We arrived just as the sun was setting- it was stunning.

On Sunday morning we had booked a tour because I really wanted to see the penguins, having never seen them in the wild before. The tour went to a few places along the coast, including the Cape of Good Hope. The coastline was beautiful and dramatic- a bit like Big Sur in California. 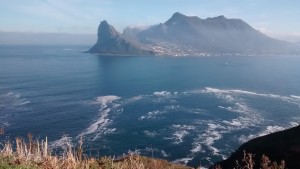 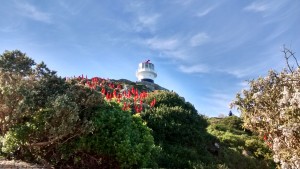 Before finally getting to Boulder’s Beach and the penguins! 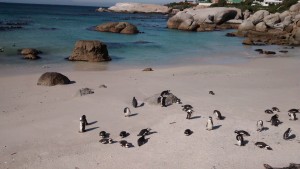 I could have watched them for hours- I love how they waddle along. Our tour then took us back to Cape Town, where after a little rest we headed out for some dinner. I did wonder about veggie options as they do seem to love their meat, but we found a nice burger bar that had a few homemade veggie patties, and lots of salad options too. We shared guacamole for starter which was freshly made and mashed at our table in front of us.

We shared this brownie for dessert- it was very good!

On Monday Andy was popping in to work so I went on the Big Red Bus tour. It is a hop on hop off bus, and one route was a loop around the bottom of Table Mountain, along the coast and to the waterfront. 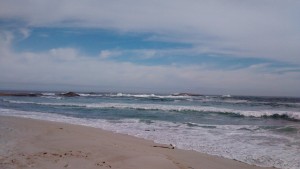 I got off at one of the beautiful beaches, but I got a bit accosted by people trying to sell me their artwork (which was impressive, but I wasn’t going to buy any of it)- it reminded me a bit of Turkey as the people were a bit more pushy than I am used to. I rode the bus the rest of the way, looking for where we should get off later when Andy joined me. 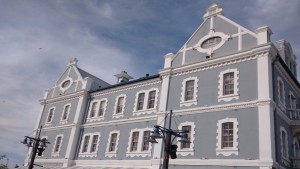 I had a lovely wander around the V&A waterfront, and a very good lunch. 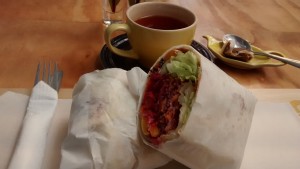 Veggie and hummus sandwich, and rooibos tea of course! I then headed back, as Andy was on his way back from meeting people at work (they had been out for lunch) and so we did the bus tour again, this time getting off at a later beach and walking along as the sun was setting. 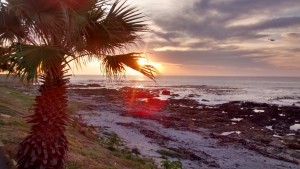 The next morning we were up early to catch a flight to Jo’burg, but I will save that for another post…