Not to sound totally British, but really, we have had quite enough rain. 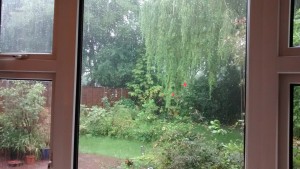 Hard to see, but it was a sheet of water coming down as our guttering was overflowing.

Last week I went to body pump for the first time in months. I stuck to very low weights as I was feeling very paranoid (plus my arms just have no strength) but I enjoyed it and was so glad to be back. 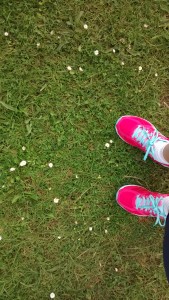 After our weekend in Manchester I had a run on Monday after work- I did a 4 mile loop (didn’t have to stop and walk this time)- it was so muggy though, but the rain was saved for when I got home. I wore my new trainers – I keep meaning to get them out as I want to rotate my shoes a bit more. They were nice and springy. On Tuesday it was a club run, and I had such stiff calves- not sure why but on some of the hills I really struggled. A few of us were finding it hard so in the end a couple of people went on ahead and the rest of us went slightly slower. The route ended up being nearly 7 miles. Next week is speed training so shorter distances (but my muscles will ache!).

I had bought a new phone and needed to collect it so when I got home on Wednesday we risked walking into town, even though there were some huge clouds about. Again we were lucky I carried my rain coat over my arm the whole time but didn’t need it. (It has rained a lot at work- wet play is no fun!).

Anyway, on Thursday our luck ran out and it poured with rain. As we were eating dinner it got even heavier and we could not properly see out of our windows. I had booked onto pump and left with a bit of extra time. I drove down the road, only to come across cars turning around due to flooding. I went back up, chose another road, and in that road I had to turn around in a pub car park as abandoned cars blocked the road, and people were wading about in wellies. I looked at a third way but that had flooding too, and the rain had not stopped so I reasoned that if it carried on during the class I may well really struggle to get home after. So, I went home. So much for my return to body pump. I called up and they have transferred my booking over to next week so that’s something. We were lucky though as some houses close by were flooded, and a road out the back was closed.

On Friday I went to the waffle house after work- we sat inside but didn’t have any rain at that time. Once I got home I fancied a walk so we found a nice loop around our new neighbourhood (we even discovered a new library near by). It’s been great getting to know all the streets and parks nearby.

On Saturday I was down to marshal at Panshanger, and later was going into London for afternoon tea. But our booking was not until 4pm, so I decided to wear my running clothes and then go for a run after marshalling. 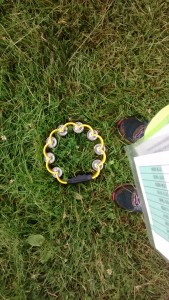 I borrowed a tambourine from my classroom to take, so I could cheer all the runners as they went past. 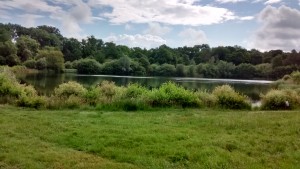 I had one of the best spots- on the corner of the lake- at this point the runners only have one mile to go, and a lot of that is flat. 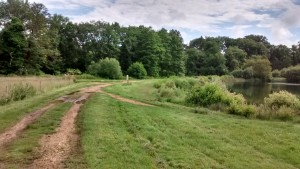 I had to stand and direct them on the curved path that follows the lake, not the track heading towards me. 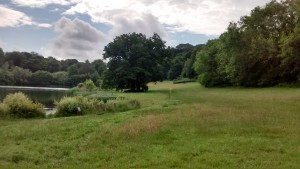 They then run alongside the lake before going alongside a field. It was great! I saw my dad and brother and gave them a big shake of the tambourine-  I alternated between shaking it and banging it against my leg, and had a bit of a sore patch on my thigh after! It seemed to make a lot of the runners smile, and a few of them had a bit of a joke- one person asked me to sing (I did a parkrun chant) and another asked me to dance, but that was a step too far so I just waved it about a bit more! 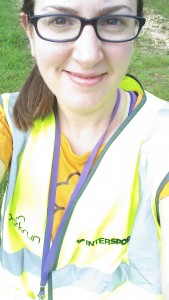 It was very bright! All of the little thunder flies were being attracted to my orange top and high viz vest too!

After walking back with the tail runner and another marshal, I put in my headphones and headed off on a run- as I had already seen the second part of the course, I ran along from the start, up the hill, around the top, and then back to near the start (instead of carrying down towards the lake). I ran up the hill a second time and then ran along a new to me trail, before turning back and going back to the car park. I had put my Garmin on at the start of my marshalling as I wondered how far away the point was, so I walked 2 miles and ran just over 3 in the end. 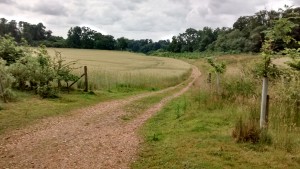 The hill that I ran up twice- it’s covered in large pebbles so it is hard to get traction on as you feel like your feet keep slipping back too. 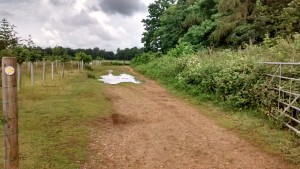 One of the “water features” was fairly full, although not as bad as Ellenbrook parkrun- that run finishes along an old air taxi-way and it was totally under water- people were splashing through it!

After heading home, having breakfast and a shower, plus some pottering (and helping Andy with the garden- he went to mow the lawn and it turns out the shed is not waterproof, so what was going to be a quick job ended up taking ages because he had to get everything out to dry on the lawn, and then of course it began to rain…) it was time to head to the station. I was going to walk but it was pouring with rain and Andy needed to buy a few bits so he drove in. I had a lovely catch up with my friends. We were near to Paddington station and wanted to look at the statue in the gardens nearby, but it was bucketing down so we just headed for the station after. Luckily by the time my train got back, it had stopped so I walked back home- it’s just over a mile so not too far at all- I just listened to some podcasts.

On Sunday morning I had to be up early as my parents were coming over, and I wanted to do a long run of around 10 miles. I have a 10 mile race in two weeks time, but a 10k next weekend so it was my last chance to get those miles up. It wasn’t raining when I left, but around 3 miles in it started. Thankfully it wasn’t too hard for most of it, but it was making the sweat run down my face more, and made my vest all soggy which was not so pleasant. I ran a similar route to a few weeks ago, but added a bit more on. Again, it’s nice to start to have a few more options and to get to know how smaller loops can be added together to make a larger route. 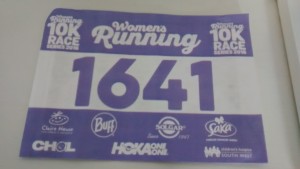 And look what came in the post! It’s for my 10k next weekend, and it was redirected. I thought I had changed our address on most things, but now I realise I need to go through my emails and find out which races post out numbers and which you collect on the day, and make sure I change the address with the races as otherwise I shall be missing out.

Did you have much rain or flooding?

4 thoughts on “Rain rain go away!”