Last week, after the 10 mile race on Sunday, Monday was a rest day for me. We decided to walk into town and try out our new local cinema (new because we have moved here, not because it is new) to see Ghostbusters. 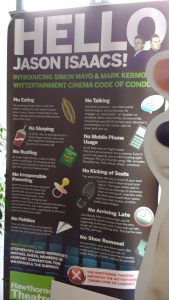 I was very pleased to see this sign in the foyer- they are clearly fans of Wittertainment! The film itself was good fun- a few laughs and of course everyone was bobbing their heads along to the music. It was still so warm when we walked back afterwards too.

I am steadily getting my miles up for the 100 July total. Last week on Tuesday I had a lovely run with the club- we went into the grounds of Hatfield House, and all the time it looked like it would rain, but was fairly cool- lovely running weather. At one point some deer stood on the path in front of us, and later we saw more deer running through the woods. It was fantastic. When we left the grounds we were up to 5.8 miles, so we did some laps of the car park to make it up to 6!

On Wednesday I went out after work for 4.5 miles, and then on Thursday I tried to book on to pump but could not, so I went out for a shorter 3 mile run- I found quite a good route of one big loop, and then the first part of the loop again (there is a cut through after a mile to come to the back of my road). 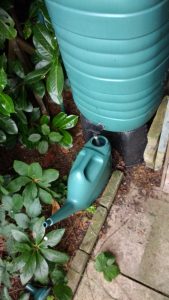 After my runs I have been going into our back garden (this is still novel to me- our old house had a garden but you had to go through the garage to get to it, so we didn’t use it as much) to have a cool down, and to water the plants at the same time. I can stretch while the watering can fills, and then move about while I water the pots so my legs don’t get too stiff. Perfect! And it saves us a job later in the evening. Although I didn’t run on Friday (I went to the Waffle House with a friend, and we had a walk when I got home) so we both forgot the water the plants that day!

On Saturday I was marshalling at Ellenbrook parkrun, so again I got there early (in fact earlier as the marshals are needed earlier than the new run briefing people), but again the car park was out of use! It meant I cut my run a bit short again as it took a little time to find a parking space. Also rather horrifically I saw a dead deer on the pavement- it made me jump as I just did not expect to see it. There was a huge puddle of blood coming out of it’s head- it must have been hit by a car. As I ran up to it, a man crossed the road, picked it up and threw it into the bushes. A bit later I turned and ran back and although I was glad I could not see it any more, the big puddle of blood was there. Poor thing.

I was given the marshal point in the cow field and told to call the RD if I saw any cows- my fingers were crossed the whole time! 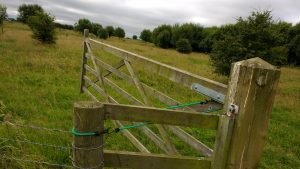 I used the cords to tie back both gates – one seemed more secure so I waited by the other as I was told I could choose which gate I stood by. 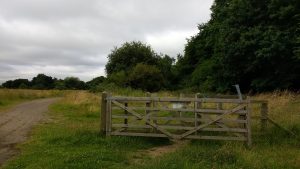 I could hear a cow, but I could not see any so I thought I would be safe. According to my map, the 2 mile point was in the middle of the field (between the two gates) so I had a bit of time before the front runners came through. I amused myself by taking photos of the ever-changing clouds, the thunder bugs crawling all over me, and myself, and also doing some squats and lunges so I would not get too stiff. 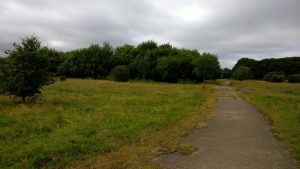 It was so overcast at the start. 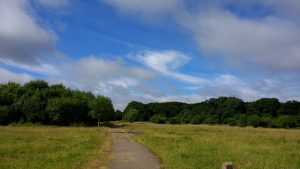 Then these cool swirly clouds came over and the blue sky came out!

I saw lots of OH ladies, and my dad, a friend from work and some runners I knew from tail running! It was good fun. One guy even high fived me on the way past! A few people were telling each other “you can do this” and they were very happy when I told them they only had a mile to go- the hardest bit was done! At one point I could see a cow in the distance, but it then went out of sight and thankfully didn’t wander any closer. 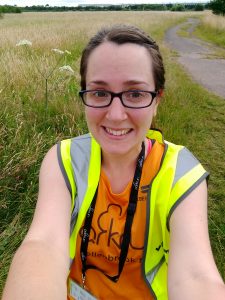 Happy to cheer but worried about the cows! 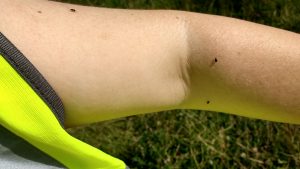 I tried to take a picture of the bugs but it wasn’t easy- there are hardly any in the picture but there was loads all over me and the vest!

After the tail runner came through, I shut the gates and ran back, and my Garmin said 4 miles, but in fact when I downloaded it later, the start point was wrong so I had actually only done 3.7- I would have added a bit on but I didn’t realise until later.

Then after a quick change I was off to my parents for pancakes- it turned out that was my brother’s 50th parkrun, and I got my official 25 club email too! A morning for celebrations!

I finished the week on 70 miles for the month, which was great as I still had a couple of weeks to go.

What sort of films do you like to see at the cinema? Do you like spending time outdoors/ in a garden?