I love this race. Even though it is now held in July, right in the middle of summer (it used to be in the autumn which was much better), I still signed up for the 10 miles this year. Partly I did this because I am doing a half marathon in September, so need to keep my long runs at a fair distance during the summer- without a race I would be more likely to cut them a bit shorter. Mainly though I signed up because it is such a friendly event, the route is very pretty, plus at the finish you can buy tea and cake for £1. Bargain.

It didn’t start until 10am, so I didn’t have a particularly early start.I had some toast for breakfast, drove there and had my number by around 9.30. I knew a couple of other runners so we chatted for a bit before it started. 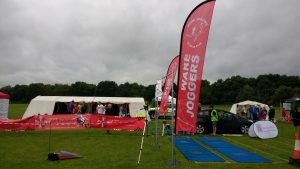 There was a warm up but I didn’t join in, I wasn’t planning on going fast so the first mile would be my warm up. I left my bag in the drop (although the car park is close by) because I wanted to put my jumper on right after- it was a drizzling, and although it was humid, I thought I might get cold soon after stopping (plus I needed my money for the cake!).

There is a 10K event too, so those runners set off  a couple of minutes before the 10 milers. The 10 mile route is two laps, and the 10K seemed to do a little extra at the start before rejoining the 10 milers and doing one lap.

I set off steadily and made sure I looked at the scenery. It is very pretty, and I noticed a few changes to the route from previous years, which had cut out one of the tough hill sections. After a couple of miles I was glad of my vest- it was really muggy as well as raining gently, so the sun-cream, sweat and rain were all mixing on my face and skin. As in previous years, the first half of the loop was hilly, and the second half lovely and flat along a tow path. They had a photographer there this year but the ground was very uneven at that point so I was looking very closely at the ground as I didn’t want to fall in the canal! The marshals as always were brilliant, and on the second lap lots of them told me I looked comfortable or in control (and of course one said “think about the cake”!). 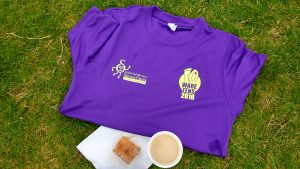 Of course after collecting my bag I went straight to the tent for some cake (lemon drizzle) and tea. I also bought a bottle of water and put a nuun tab in it from my bag- it was quite a sweaty day.

I hung around a bit as they were giving out awards to the winners of both races, and then drove home. 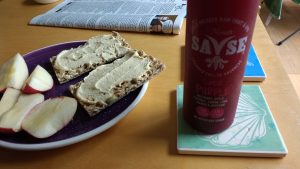 After a shower I was getting hungry so I had some hummus on ryvita, an apple and a lovely smoothie.

Then I had an efficient (and tiring) afternoon with so many jobs- getting some bits at the shops, making a cake for work, ordering end of year presents for people, trimming one of our hedges, planting some seeds, filing paperwork, doing washing….

I suppose one year I should try to beat my course pb, but this year I was very happy to run it and enjoy it, without being so exhausted afterwards.

Do you normally run races for time or for fun?