This was my third time of running the WR10K event. I really enjoy it- the setting is nice (around a lake), it is easy to find (not far from the motorway, around a 50 minute drive), there is great support, the marshals are fab, the goodie bag is full, you get a medal and a technical t-shirt- lots of positives!

For the last couple of years it’s been the same day as the British Grand Prix, so one year Andy dropped me off on his way, and last year I drove myself as I didn’t want to wait around for him to finish. But this year the Grand Prix is next weekend, so he drove us up there. It was such a warm day- we are not used to this! I had put on sun cream but once we were out of the car and walking around I wished I had brought my visor with me as it was so bright.

They had the warm up but I stayed away for that, although to be fair it is a proper warm up and not static stretches and Mo-bots. The start was not that organised this year which was a shame- they have pacer runners for 50, 55, 60 and 70 minute 10K times and there is a 5K too, which is one lap, so you divide the time by two if you are doing the 5K. In previous years they called groups over, but this year the 50, 55 and 60 minute pacers were all at the start line, and only the 70 minute pacer was further back. I didn’t want to fight my way through, so I just thought I would use my Garmin. I had planned on keeping the 60 pacer in sight for the first lap and then seeing how I felt, as I ideally wanted to finish in under 60 minutes, and maybe beat my time from last year.

I enjoyed the first lap although it was very hot, so I was mindful of not going too fast. I was overtaking a lot of people at the start and it seemed more congested than previous years. The marshals all had cowbells which was great. It also had the friendly feeling of a parkrun with lots of runner thanking the marshals which is always great. The scenery was lovely, especially in the sunshine, and I loved seeing all the geese and goslings. At the half way point some of the 5k runners were finishing, and I saw one of the girls from my running club (she thought she was marshalling, but they didn’t need her so she just came to watch)- I think I shouted to her “it’s so hot!” as I ran past. 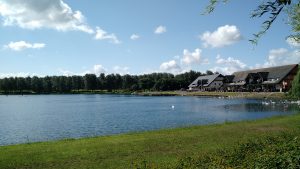 The second lap felt tougher because I was just getting hotter. There were some parts in shade, but a lot was very exposed with little breeze. I saw some people in full length tights and long sleeved tops which made me feel hot just looking at them! There were a couple of water stops but I didn’t have any as I knew I would be given some at the finish too. Around the 8k mark I suddenly felt really tired, my stomach ached and although the time on my watch meant I could still make it in under the hour, I really felt like I could not be bothered, which is not like me. I had to tell myself that I didn’t feel sick, I was just imagining it. At 9k I thought we were going through the woods but we had another out in the open bit first, so I started counting to 100. As you come up to the finish you run in front of the hotel and pub, and so there were lots of people out supporting which was great. I had really wobbly legs and tried to push through the finish line, but Andy told me I looked like I was taking it easy! Not sure if that’s a complement or not, because it didn’t feel easy! 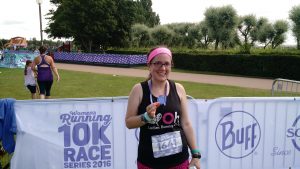 I was then given so many things! Water, a medal, a goodie bag, a t-shirt (I chose a medium which is perfect- it’s lovely and soft but also technical- and a much nicer fit than last year), a WR magazine, a Buff bag and some leaflets. 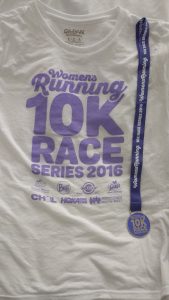 The medal is engraved on the back like last year too, which I love. I had some water, caught up with Donna from my club, and then found Andy and we headed back to the car. It was pay and display and I only had 2 hours so we only had around 20 minutes after finishing. I changed my socks and shoes, and wiped my face, but the rest of my change of clothes would have to wait. I had a nuun tab in some water, and then we drove to the shopping centre. In the toilets I used more face wipes (honestly I cannot tell you how much I love to use a face wipe after a race- especially in the heat I get salt all over my face and it feels so good to wipe it away), changed into jeans and the t-shirt I had just been given, and looped up my hair (my ponytail was sopping wet). We bought lunch (I had the lovely super greens and red sandwich from Pret which is my absolute favourite- baby kale, avocado, red pepper, red tapenade, flaked almonds) and did a bit of shopping. We then braved Ikea as we needed another bookshelf and wanted to look at armchairs and a few other bits, before finally driving home. 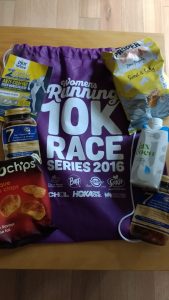 I surveyed my goodies! There was also a little pack of Urban Fruit dried pineapple, which I had in the shopping centre before lunch. 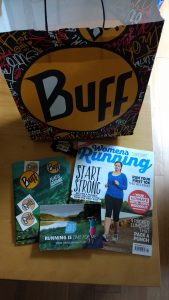 I had looked into marshalling the London one, but it is the same weekend as the Disneyland Paris half marathon, so I can’t, but maybe next year. I loved the look of the cowbells!

After a shower and a cup of tea, we chilled out for a bit before walking into town and going to Bill’s for dinner- the novelty of being walking distance to town is not wearing off at the moment!

When I looked at the results later, my official time was 59.15, so I was pleased to be under the hour in that heat. It was not as quick as last year, but I am happy that I enjoyed it and still managed a decent time (for me).