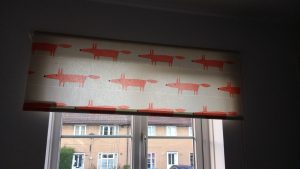 The blind is finally up in my office. At the start of the summer my dad helped me to decorate the room, and I bought the blind but Andy’s drill was buried somewhere in the old shed.

Our new shed is up! After the old one took us 4 hours to take down, it took the people about 15 minutes to stick together with a nail gun! Andy is outside now painting it blue, to brighten it up a bit. 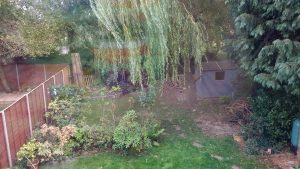 We finally got the lights sorted in the bathroom! This is big news indeed. Honestly, I have no idea how the people here before us lived with it. There was no light switch, but a sensor, so if it was dark the light would come on (multicoloured colour changing lights no less…) but the sensor was not by the bath, so if you were having a shower and it was dark (or gloomy outside) the lights would switch off after about 40 seconds. So I would have to open the shower door and wave my arm about to make the lights come back on again- it was so annoying! Anyway, an electrician came and fitted a switch, and updated the fittings (they were metal and going rusty) and replaced the bulbs. Now I can see for the whole of my shower! He also replaced our (very tasteful) plastic gold chandelier in the dining room with a normal pendant so we could have normal lampshade.

Finally we replaced our old dining room table- we bought it when we bought our first place, over 10 years ago- it was something like £15 from Ikea and we kept thinking we’d replace it but didn’t find anything we liked. 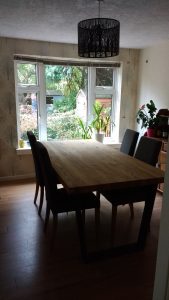 Our new table, chairs and lamp shade (plus the blue shed in the background).

It can’t all be good though. The guttering flooded and so we had people out to fix that (during the day where everywhere flooded and there were landslides). The dishwasher broke and blew all of the sockets in the house. As it was quite old we bought a new one instead of paying for the call out (because who knew if it could even be fixed)- it’s an integrated one which was such a pain because they are more expensive, plus the original one had been fitted rather badly so the people installing the new one had a lot of trouble getting it out and fitting the new one. But it’s in now.

The boiler stopped working this week too. After yoga on Wednesday (luckily I don’t wash my hair after) I had to heat water in the kettle and mix it with the cold water for a bath. Because it was so cold I made a hot water bottle, left it in bed while I got changed, and then when I got into bed and picked it up, it burned me. I jumped out, knocked over my full glass of water, and had to mop up the water (getting cold again). I thought there were a few drops of hot water by the valve, but when Andy picked it up we realised it was leaking all over the place so the mattress was soaked in two places (from the hot water bottle and the glass of water)- there I was at 11 pm drying the mattress with a hairdryer. Hmmm.

The weather seems to have been much colder this week and I think I would have had the heating on for an hour to take the chill off, but we could not. We have been showering at Andy’s parents (lucky we have that option) but it’s been cold at home. Today I’ve been sat in my office since lunch time doing work, and I had to have a hot water bottle (not the broken one) to warm me up a bit. Anyway someone came about the boiler on Friday and thinks they can replace the circuit board next week, although apparently it’s old and a bit of a mess so we might need a new boiler.

We still need to sort the flooring in my office and our bedroom- we got a quote for the bedroom but we may have to wait and see how the boiler does! Then it will be on to Andy’s office (more wallpaper stripping…).

Have you had your heating on yet? One of my colleagues used to do what she called “The November Challenge” (not having it on until November)- I think I last into October but it would have to be a very long Indian summer for me to last until then!