So this weekend, on Friday evening after dinner at home, we got the train down to Brighton. The last few times I have been to Brighton, I’ve been to Hove Prom parkrun, mainly as it is easy to find (find the sea, and turn right and run along the seafront). But when I looked last time, it turned out Preston Park was marginally closer, and although I thought it would be complicated to find, Andy reminded me that it was where the marathon started, and basically from the main road near the Pavilion (very close to where we stayed) I had to turn left and keep going straight. Simple. 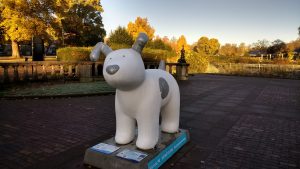 A Snowdog by Preston Park

It turned out to be a very good idea for many reasons:

Saturday morning was beautiful- so frosty and clear, with such blue skies. As I took a little detour looking at more snowdogs, when I arrived I had run 1.8 miles, so I pottered up and down the path a couple of times to get it up to 2 miles, and to stay warm. I had worn a long sleeved top over my t-shirt, planning to take it off but it was so cold I kept it on the whole time. 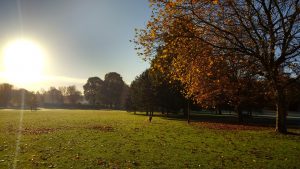 The park seemed busy- of course when I first got there I had no idea where in the park it started, and ended up getting lost in some sort of maze bushes. I’d seen some runners in the distance heading for the top of the park, and luckily I found it! 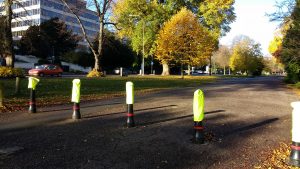 They even have high viz jackets for their bollards! How brilliant! 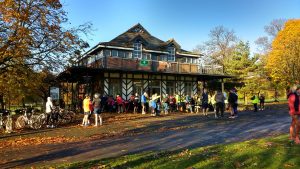 The new runners briefing was friendly, although another person “won” (coming from a further distance) and then the full briefing was as usual- clapping for people’s 50th/100th runs and so on. All good. 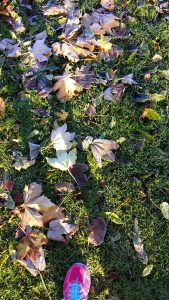 It was so frosty, and the path was covered in a thin layer where it was still in the shade, but I knew the runners in the front would sort that out! They had pace posts (?- numbers on posts to help you line up in the right place), although I lined up by the 28 minute sign and behind the 30 minute pacer.

The route sounded a little confusing (and the new runners briefing didn’t totally help- in the end he said unless you’re planning on running sub 17 minutes, just follow the person in front) but in fact it wasn’t too bad- you started off facing anticlockwise, and ran half a loop of the park, before turning around at a cone (and a marshal) and running clockwise back to the start. Then you did two full clockwise loops, with the finish funnel being a peel-off from the main loop. I started off fairly steadily- as my watch had been running since the hotel I had no idea of pace, but I went past the 30 and 29 minute pacers just fine. I could see the 28 minute pacer up ahead, but on my second time running up the hill I managed to drop back a lot (I had a bit of a cold so needed to get a tissue out of my pocket which did slow me down). Anyway, there was a nice long gentle descent so I managed to catch up and then overtake him before the final hill (it’s only a small hill). I had seen my watch said 9.02 as we crossed the start line, and it was bang on 9.30 when I finished, so I was hoping for sub 28.

I got my chip scanned, and to my surprise the scanner didn’t keep my chip, she gave it back to me. I asked her where to put it, but she didn’t know.  So I wandered back to the finish line and asked another volunteer- they pointed out a table, a bit further from the finish line and scanners, with a parkrun banner. Here I joined a queue and people had to put their tokens into the right section of the token sorting box (e.g. mine went in the 190-199 section). Now, I have no problems with this at all, but it wasn’t totally clear. They actually put a message up on their facebook page saying they had lost a lot of tokens this week, but I am not surprised by this- if it was my first parkrun I may not have asked where to put it. I’ve seen this sort of token sorting at Wimpole Estate, but they had a huge board and it was pointed out at the main briefing, and then at the end the scanners were close to it, and you were directed over once you had been scanned. Anyway, a small point. 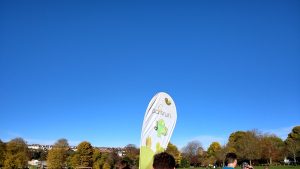 When the results came through I had managed 27.54 for my 85th parkrun- I feel like the 100 is now in sight which seems crazy! 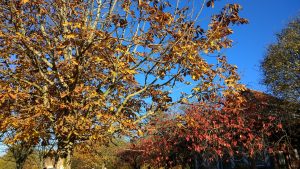 I didn’t hang about as I didn’t want to get cold, so I headed back to the hotel,  running nearly 7 miles in total for the morning. 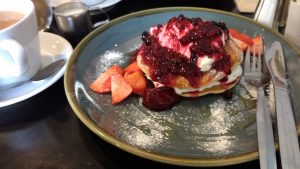 Cafe Coho was also calling- after a shower it was time for delicious pancakes with Greek yoghurt and berries.

Have you ever seen people running wearing crazy costumes? I ask because one guy was running the parkrun wearing chain mail. An actual top made of metal. Mental. How does your parkrun collect in the tokens?  Ellenbrook has little buckets and then the people empty them every few minutes and sort them.