This week the running didn’t go quite as planned. I went out with the club on Tuesday for a nice (but cold) 5 miles, and then had yoga on Wednesday (in which we worked towards a tripod headstand- I managed to get my elbows to rest on my legs so am maybe a quarter of the way there!) I had a headache on the Wednesday but after yoga I felt so much better. All good. On Thursday I felt rubbish- a faint headache all day, achy neck and shoulders. I had a meeting to go to after work (at another venue) which had bad traffic getting there and home, and by the time I got home going on a run or even a walk was the last thing I fancied. I had thought of running after work on Thursday and Friday, as I was volunteering at parkrun on Saturday so knew I could not run then. But those plans went out of the window- we did have a walk after work on Friday to get some fresh air and that helped a lot. 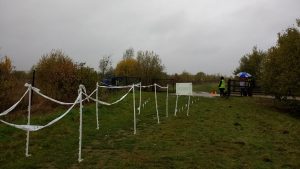 The view of the finish funnel from the gazebo

Luckily on Saturday morning I felt OK, and I wrapped up in many layers as I had volunteered to do the timekeeping. This would involve standing around, and it was cold and pouring with rain. The team at Ellenbrook have a gazebo, which they had put up by the time I arrived, so I sheltered under there for a bit.

I did feel the pressure with timekeeping, but luckily they have two people doing it, and the other person had done it many times before. The laminated card that you are given had very clear instructions (because to reset it you had to press many combinations of buttons and wait for different things to appear on the screen). All I had to remember was to press “start” at the beginning, and then the “lap” button each time a runner crossed the finish line. 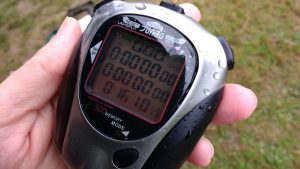 Thankfully all went well- every now and then we would check that we had the same number at the top (it clicked over each time we pressed it)- it was a bit confusing at times as you are anticipating when a runner would cross, and a few people ran back to run in with someone else, and they would duck out at the last minute. No mistakes though! My dad had come along and because of the nature of the course (one small loop that goes back to the finish area, and then one large loop) once we had pressed start, we could stand at the end of the loop and cheer everyone past before going to the finish line- we had a good 5 minutes after the tail runner went past before we had to worry about people finishing. My hands were so cold though, as I could not press the buttons with my gloves on. The RD asked one of the marshals to hold an umbrella over me to stop my hands getting any wetter- I felt like royalty having it held over me!

The runners were fairly speedy- I think the tail runner came in just past 40 minutes, and it was only a small field of just over 60 runners- I think the rain had put a lot of people off. There is a storage locker so we packed all the bits away before heading home to warm up and dry off.

My parents popped over mid-morning, and then we headed off into London as we wanted to visit Loaf to look at a bed- we’d seen it online and liked it, but we wanted to see it in the flesh as it were. 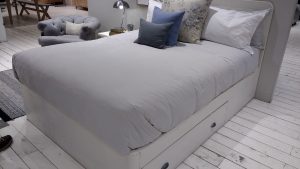 This week I had watched a documentary (on BBC4 I think) about hipsters, and this shop was definitely hoping for that sort of customer- it even had an ice cream parlour inside- weird.  It was in the bit of the middle of nowhere- we got the tube to Vauxhall and then had a mile walk in the rain (we were going to walk along the river, but the path was closed), and when we finished we called an uber- a few people leaving just before us had the same idea and they were queuing up!

We had a walk through Hyde Park (and saw all the Winter Wonderland stuff being built- not my kind of place it seems) before braving Oxford Street. It was so busy, just horrible. I wanted to see the Christmas lights (and we had a John Lewis cake voucher only valid in London, so…), but that was enough! We were home by half 6 and that was long enough!

We watched a documentary on Netflix about The Barkley Marathons- I had heard a bit about it on MT before, but seeing the weekend evolve was just amazing, and totally mental- that’s one race not on my list! Although I did like the low key nature of it, just not the crazy length, the map reading, the thorns, the steepness, the night time navigating… 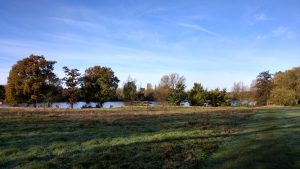 And what a difference a day makes! I had a long run planned for Sunday, and the weather was fab, not a drop of rain in sight. The run wasn’t great as half way through my leg started cramping, like it had in the Bright10, so I had to keep stopping to stretch, and then I got a stitch when my leg was OK, so  was quite glad to be finally home!

Do you like watching documentaries? If you, what would you recommend- I love them!