My Strava feed seems to be full of running at the moment- it seems a lot of people are running every day in December/ for advent. To me, that’s crazy. I know that running 3 days in a row is OK for me, and 4 is my limit, and really the 4th run is no use to me at all as I will be stiff, tired and slow. However, I do like the challenges that encourage me to run a little further than normal. I can get into a bit of a run midweek- 3 miles is my minimum run (what’s the point in spending more time washing my hair than I spend running?), so doing a distance challenge is good as it makes me run 4 or 5 miles in the evenings instead. It is also good for my at parkrun as I tend to run a mile or two beforehand, and so I am then warmed up for the start of parkrun.  As I have mentioned before, I’ve signed up for the 100 miles in December challenge, and I also want to run 1000 miles in 2016. We are half way through December now, and my monthly total is 44 miles (not too bad you might say- nearly half way), and my yearly total is 940. As we were away for the first weekend in December I did no running then at all- missing one long run and one parkrun had a big impact. So I have 60 miles to run in two weeks. I think it’s doable. This weekend I’ll run before parkrun, and do a long run on Sunday, so that will be around 15 miles. I’ll do a normal club run on Tuesday, and then I can run in daylight (I finish on Wednesday)- I’m planning another long run on Thursday with a few of the girls from the club. I might run to and from parkrun on Christmas Eve, and I have a 10 mile race the day after Boxing Day. I don’t want to be having to run lots of days in a row so I am trying to make sure all of my runs are slightly longer. 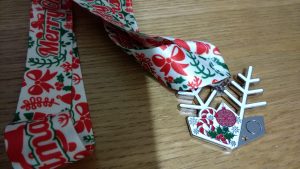 I’d also forgotten that I had signed up for the Virtual Runner 5k series of December- annoyingly I didn’t go to parkrun the first weekend (we were away) and last weekend I marshaled, so one day I did an out and back to get the 5k in, although a longer run would have been better, so this week I submitted the first 3 miles of a 5 mile run. The 4 medals all clip together to make a snowflake which is why I signed up.

Ages ago I was sent some granola from Fava Mills. They use fava beans from Finland to make high protein breakfast cereals. 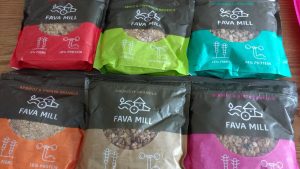 They make 5 varieties- Apple and Cinnamon, Cranberry, Crunchy, Apricot and Papaya, and Berries and Beets. They also make ground fava beans which you can add to savoury things, a bit like quorn mince or lentils or something. 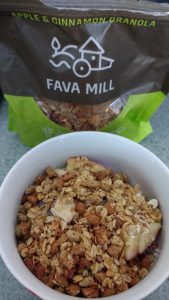 The apple and cinnamon is my favourite- this is on top of an apple with some almond milk, although you can’t see the apple. The granola is super crunchy, and although I do prefer it crunchy, I leave it to soak for a bit as otherwise I don’t think my teeth could handle it! 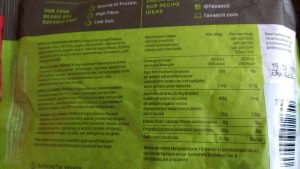 They are available to buy only online at the moment, here. They also have some recipes on their website.

I think it would make a great crunchy topping for an apple crumble too, although I have not tried it just yet.

Do you mange to keep running/exercising during the festive period? Have you ever joined a challenge? When do you finish work for Christmas?

2 thoughts on “December running so far, and fava bean granola”