So, Christmas is well and truly here. Since finishing work on Wednesday I have been getting into the spirit- icing the Christmas cakes, getting my hair cut (not so festive, but very much needed as my last cut was in July), wrapping presents, buying a few last minute bits, treating myself to a gingerbread steamer (basically the latte minus the coffee) making maple-roasted nuts and Christmas brownies to take to my parents tomorrow. 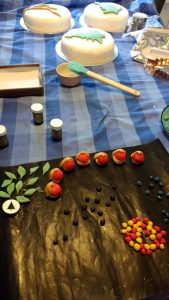 Decorating made a big mess! 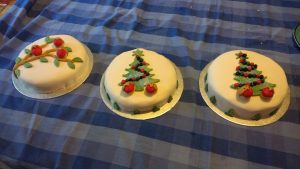 So, the running. I had planned a long run of 10 miles on Thursday morning (in the light!!!)- originally I was going to run with some ladies from the club, but a couple dropped out, and on Wednesday my back and then hips (or whatever it is, I don’t really know) were quite stiff and not feeling great. I messaged my friend saying I would rather run alone as I didn’t want to hold her up but also I knew I would be tempted to speed up and push myself a bit too much.  I headed out gently (it was freezing) and tried a new route, which I thought would work well as then I would not be able to compare times to other routes. 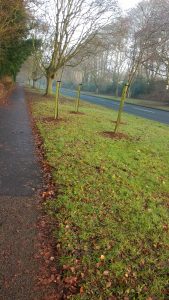 This horrible hill was in the middle- it’s 120ft from bottom to top, and it;s very steep. I walked a couple of times as it was just horrible. 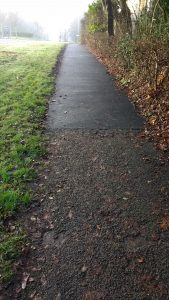 Why doesn’t it ever look as steep in real life? Anyway, I stopped quite a few times as I got lost (sort of- I had to check my phone a few times and wasn’t quite where I thought I would be..), I bumped into a friend who was out walking her dog, and then I went into the bank to pay in a cheque. This was good though as it meant I was going slowly and not pushing at all. I did some freestyle yoga (making it up as I go along) when I got back- the downward dog after a run is lovely. 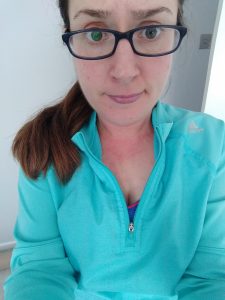 This is my “I should have worn a buff” face- it doesn’t show up that well but the skin on my neck and chest went all blotchy from being so cold- this happens to me a lot in the winter and is very annoying.

After the run (I then had 29 miles left before the end of the year) I felt OK, but I ended up sitting down for a bit (catching up on emails and TV) and got fairly stiff. I had my haircut that evening and walked around town for a bit first, but on Friday I was still a bit stiff. We walked into town and then when we got back I tried a new app that Andy got for the TV (maybe called Flow? I can’t remember)- anyway, it had loads of videos of yoga sessions on there, including a whole section for yoga for runners. I put on the lights on the tree, lit a candle (Bluebird Tea mulled wine candle that smells like mince pies mixed with orange zest). I ended up doing about 40 minutes (I think I did a 5 minute one to see if I would like it, then a 15 min one, then 20), and at the end once I was warmed up I did a little headstand practise. At first I could only get one leg onto one arm, but I regrouped and had another go, and managed it for a bit. 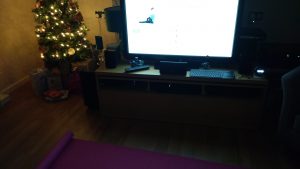 At first I could not manage the pigeon pose on one side, but by the end I had another go and it really helped- the hips is where the tension seems to lie.

I was worrying a lot (I have some paranoia around this) as I was planning on running to and from parkrun on Christmas Eve, but thankfully the yoga worked wonders and all was fine. I was treated to this gorgeous sunrise just before 8am today: 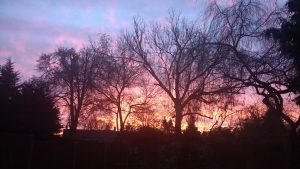 I then headed off slowly and steadily, and made it to parkrun just fine. 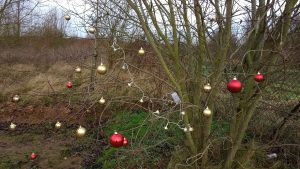 It had such a festive feel- baubles in the trees, fairy lights on the fences, 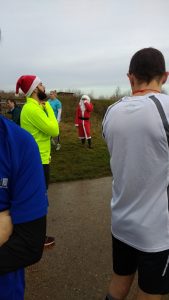 Santa set us off (instead of 3,2,1,go, he said ho, ho, ho go), and there was an inflatable snowman handing out the finish tokens! 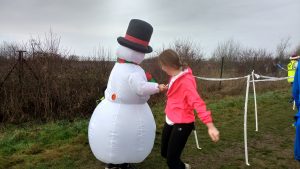 I ran with my dad – he was taking it gently as he had not been running for a couple of weeks, and had cycled to the start. We finished in 29.39- pleased to be under 30 minutes as it was very muddy and slippery. 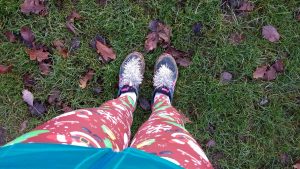 Trail shoes were certainly needed -it was very slippery and muddy out there. (Added tinsel for the festive feel)

After a quick chat we parted ways as we were all getting cold, and by the time I got home I’d run a half marathon, and my legs were still feeling fine. Phew. 16 miles to go now. 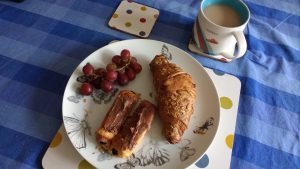 I was so hungry after my shower- we had some almond croissants in the freezer (one each for us), and then I found a left over pain au chocolate, so decided to have both along with some grapes.

We walked into town in the afternoon (leg still going well)- so hopefully I shall be alright for a Christmas morning parkrun tomorrow.

So, onto the Christmas films/ TV shows.

Already this year we have watched Home Alone and the Gavin and Stacy Christmas episode (Midge Ure cheddar…). Tonight we have penciled in It’s a Wonderful Life (a Christmas Eve tradition), and we need to find time for The Snowman, It’s Always Sunny in Philadelphia Christmas episode, Community Christmas special, Home Alone 2 and The Muppets Christmas Carol. Andy also likes Die Hard but we shall see if we have enough time.

What are your favourite Christmas TV shows / films? Did you have a festive parkrun this weekend?

Have a lovely Christmas! x

PS- It was my debut as run report writer this week, and I was a bit inspired by The Snowman- check out my report if you fancy it.