First up (and this is totally not a complaint) I still can’t claim my 100 parkrun t-shirt (which I earned in March) because they have had issues with stock. I am really not complaining- I would love parkruns if they had no t-shirts, and no-one can complain about getting something for free. But I do look forward to celebrating these milestones. So when I did my 20th different UK course I was very quick to order my cow cowl (an unofficial piece of merchandise to show that you are on your way to 100 different venues)- you can order it once you are on the UK most events table (20+ UK events). I wore it to St Albans (which is really a home run) and then forgot it when I was marshaling last weekend, so as we were off to Kent this weekend it was the first thing to pack! 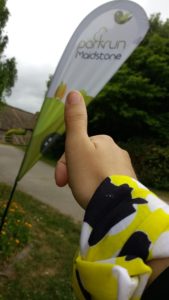 The start was right around the corner from where we stayed (the Village hotel)- it’s even on the directions! I did check my phone because the road didn’t look like a “real” road- but as you follow signs for the Museum of Kent Life I should have trusted myself really. 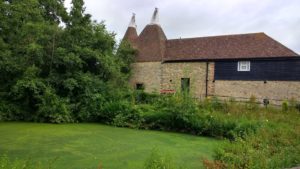 The start area was by the museum, which had a few animals (donkeys, ducks, little horses) as well as lovely flowers and a pond. 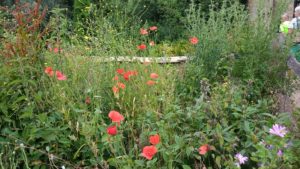 I kept my eyes peeled but didn’t see any tourists.

The new runners briefing was great- they explained that if you run here regularly they have a little index card box, so you can leave a copy of your barcode inside- it’s by the finish which means even if you forget your barcode, they will have one there. (I’ve passed that idea to Ellenbrook Fields too). 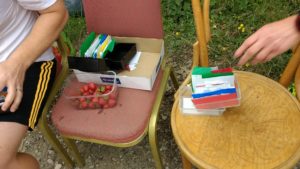 Taken at the end- what a great idea!

The start was slightly downhill to the towpath, then you ran along the towpath for just over a mile, crossed a bridge, ran a little loop of a playground and then headed back over the bridge and along the path. To finish you ran beyond the start, up “a little hill”- (it was little but tough after a flat finish). 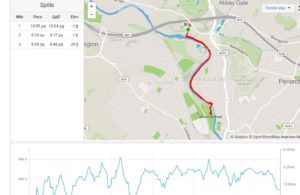 They said that the first 5 rows were for sub 20 minutes, and the back was for walking at around an hour, but with nearly 400 people there it isn’t easy to get into finish time order. I wasn’t too fussed about my time- I had entertained going for my fastest mile (the Strava challenge for June) but when I saw how narrow the paths were I left that to another day. It was very stop start because at times it was only wide enough for 2 people at most. 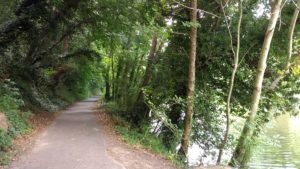 It was very pretty by the river (canal?)- I really enjoyed the scenery. It was a lovely shady route too- the weather on Saturday was overcast but warm, but it would be a good option for a sunny day as it was mostly shaded. We had been asked to keep left, and although I could overtake people one at a time, I kept getting stuck for a while. Soon the fastest runners were heading back in the other direction which meant overtaking was not really doable. The bridge was very weird- it was so wobbly to run over- sometimes it would bounce up and you would hit it sooner, and other times if it was bouncing down it felt like you were falling slightly. I wasn’t a fan. We were told we could spread out once we had passed the tail runner- for me this was at around 1.8 miles. I did manage a royal flush negative split of 10.05, 9.20 and 8.59 because of the ease of running at my pace once it had thinned out.

The marshals were really great- very encouraging and a few of them were in groups so you had an even bigger cheer. They also had a few (3?) photographers out on the course. 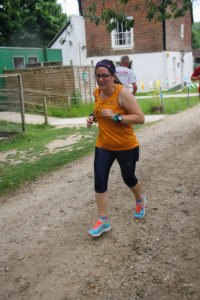 This was me coming up to the final hill, having just run past the start. I was wanting to stop right about then! (From their Flicker page)

As you approached the finish the path bends, and on the bend were loads of people (runners who had finished, and marshals) cheering you on. They all know it’s a tough finish. 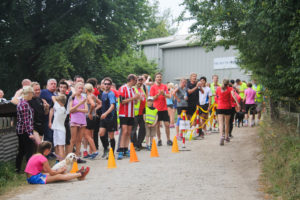 Then as you round the bend you can see even more people (above- from their Flicker page again)- really great to see. 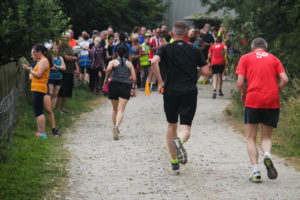 After I finished and had my chip scanned, I walked back down the hill- I did cheer people past but also got distracted by a little pony in the field. 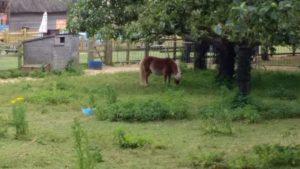 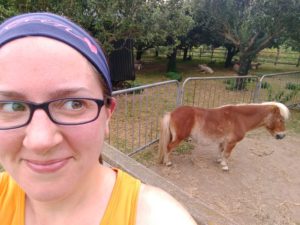 I also had to have a selfie with the Li’l Sebastian (anyone else a Parks and Rec fan?). I then walked down to the water to take a few photos. Some runners were still going and on my way back the marshals gave me a big cheer (as I was walking)- I thanked them but felt I had to explain that I had already finished and was just taking photos- otherwise they would have got confused over me heading away from the finish and back to the hotel!

I headed back to the hotel for a shower and breakfast (the hotel has a Starbucks in the foyer- iced tea = a lovely post-run drink) before we headed out for the day (but more on that another day).

Do you like out and back runs? I sometimes quite like it in a race as I can look out for people I know further up the field, but sometimes it makes the turnaround point feel further away.