Originally this Saturday was going to be a local parkrun- my dad will be working at Wimbledon for the next fortnight and usually has one of the international officials (Dorin) staying with them- they were either going to head to Panshanger, where they have run for the past couple of years, or cycle to Ellenbrook fields. However, I had a message from Dad this week saying that he needed to deliver a fridge to their flat (they rent a flat and were in it this past week for the qualifiers too) so would I fancy going with him to Wimbledon parkrun? Well, I am not going to turn down some tourism!

He picked me up at 7.30am and the journey took around an hour, so we got to the car park in the common with plenty of time to visit the toilets (thankfully open even though the cafe wasn’t), and have a little nose through the window at the cafe menu. 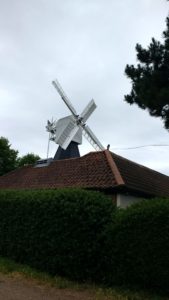 There were lots of high viz jackets out on the common opposite the car park, so we waited there for a bit and it wasn’t long before Dorin turned up (he had run from the flat- 1 or 2 km away)- he was wearing an apricot Panshanger top that Dad had given him. A little later three more of the officials came- Mircea (also in an apricot parkrun top) who also knew Dad well, and then Elzbieta and Juan who had been persuaded by Dorin and Mircea to try out parkrun for the first time. Dad had even printed off their barcodes but they had ended up stopping at a hotel on the way and they had kindly printed them off for them too. 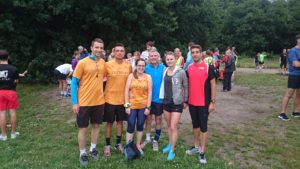 Our “before” photo- Dorin, Mircea, me, Dad (he had his apricot top on underneath), Elzbieta, Juan.

There was no new runners briefing – just before 9am the RD stood on a bench and addressed the crowd- it was really silent- I was very impressed. They had a few milestones to cheer (some J10’s, 50’s and then a few people on 300 runs celebrating the impressive but unofficial milestone). They then had a little speech imploring people not to funnel-duck- it is obviously a big issue there (maybe it’s worse at the busier parkruns when the funnels are longer?) as they threatened “bad cop” next week. Finally a lady stood up to say she would be offering a free yoga session on the common afterwards- how lovely.

We then all walked 400m to the start, which faced the way we came- the international crew were at the front of the line (Dorin has run Panshanger in 19 minutes and the other two guys thought they would be at a similar pace), Elzbieta was aiming for 5 minute kms, so headed a bit further back, and I went further back still with Dad- he decided he wanted to run with me which is always good as we have a bit of a catch up (until I run out of breath and then he just talks to me!).

The route was such a lovely parkrun- I thought it would be out in the open but it was mainly through woods on wide flat paths. There were occasional tree roots to look out for (although a lot of them had been sprayed with white paint), and every now and then it narrowed so about 3 people could run side by side, but overall it was pretty perfect. The running conditions were lovely  as it was cloudy and not too hot, but the route was so shady it would be welcome on a hot summer day too.

It was a two lap course and at the half way point they had a guy stood there with a stopwatch calling out times- we were told 14 something which seemed good (I was just hoping for under 30 although I knew I should go a bit quicker as it was totally flat). We did speed up a bit during the second lap, and it seemed to go by really quickly- we thought we had about half a lap to go and I looked at my watch to see 2.55 miles already run.

The finish was where the run briefing was, and Dad decided he had a bit of a sprint finish in him- as he was heading off a guy ran from the sidelines and started yelling (cheering?) at a guy behind me, saying funny stuff like “come on, I’m younger than you/ you can see the finish line, hurry up…”- anyway I was overtaken by the guy storming through- he did a very impressive finish indeed.

The funnel was fairly long and we had to bunch up a bit as just behind us was a big group of people. It’s funny, I always feel like I am near the end as I suppose the crowd thins out towards the end, so I am always surprised when I see the number of people still to finish. My time came through on Sunday morning with 27.46 so I was very happy with that. Position 260/405 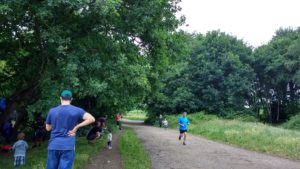 There was someone taking photos at the start so I didn’t really take any -I took this one at the end as I collected my bag from the bench- just to show the lovely wide tree-lined path. Sadly I didn’t see any wombles, but I think perhaps the trees were just too thick and they were hiding in there somewhere. 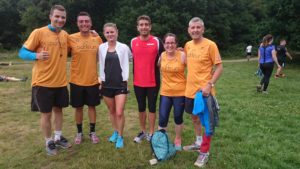 (Note my much redder face in the “after” photo!)

Then, we did something crazy…. we went to the cafe for breakfast! That was my 111th parkrun, my 22nd different UK course, and my first post-parkrun cafe visit! I did sometimes used to get a chai latte from the coffee van at Panshanger, but drinking on the walk back to the car isn’t the same.  Usually if we have travelled somewhere we have headed back as Mum would make us a lovely breakfast, and if I have been away I’ve got something to take back to where we are staying.

I had a toasted teacake while the others had omelettes, bacon sandwiches or full English breakfasts, and it was lovely just chatting away about the tennis, how they had been spending time in England, and of course how great parkrun is. I’m not taking parkrun for granted at all, but it’s lovely to see it from fresh eyes every now and then. They were all so amazed seeing little kids (one finishing very high up) as well as much older people running, and were really pleased to see the park being used for a community event. Juan was so keen and was even talking about buying an apricot shirt to be delivered to my dad, who would then pass it to him the next time they met at a tournament!

We must have been in the cafe for over an hour- we’ve both said we need to try and do it every now and then at other parkruns as it does add to the occasion. We had a fridge to sort out (well, Dorin came with us to help Dad get the fridge out of the car, into the flat and then take the old one back out) and then of course London traffic meant we didn’t get home until nearly 1pm!

So parkrun 111 achieved (I love the symmetry of that number) and my 22nd UK course (also a palindromic number).

Did you used to love the wombles? Do you usually go to a cafe after? (I do love the Panshanger coffee van of course, or breakfast at my parents house). Have you spotted any good running clubs lately? Here had the wimbledon windmillers and I imagined them running with their arms circling constantly, but sadly I spotted no-one doing that. Will you be watching Wimbledon?