Last week we got took the car on the tunnel (something I had never done before) and drove to the Loire Valley in France for a week in a self catering cottage/gite.

Fun fact- I also learnt how to make photo collages. So, look forward to seeing many of those over the next few weeks! 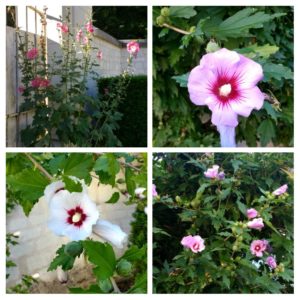 We left on Friday night and stayed right by the tunnel in France, as we got a very late train (11pm or something)- we were toying between staying there or nearer to Rouen, to break the journey up a bit, but in the end decided that a 2 hour drive would not be the best at that time of night. I then found out that a parkrun had just started there- it was so tempting to change our plans but as Andy was driving it wasn’t really fair on him. I took my running things with me as I knew I would have time to run while I was there- I’ll save that for a separate post though.

The drive to our gite took up most of Saturday- we had a brief stop to pick up some lunch (and to use the toilets in Ikea), and another brief stop later on to eat lunch, but it took us pretty much from 9am-5pm to get there.

On Sunday we had a wander around the town near to us (Chinon)- there was an antiques market going on by the river so we spent a while looking around before walking up to the castle. Later we had a walk along a cycle path (although cars did drive down it)- great for me to scope out an easy running route.

On Monday our first chateau visit was to Villandry- you could pay for just the gardens and they were very impressive. It was baking hot there but we spent a few hours walking around and admiring the views and the beautiful plants- some inspiration for our garden at home! The fruits and vegetables were grown in geometrical shapes, and each bed had a map so you could see what was being grown in each section. 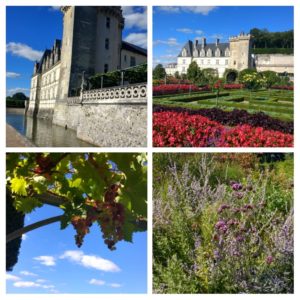 Of course a visit to France could not be without croissants- I was looking forward to almond chocolate ones, but we only found these once in a little bakery in the town, and then on our final day. The owners of the gite also made their own jam, and we were given a couple of jars as a welcome- I very much enjoyed the strawberry vanilla jam, and I brought home the plum with juniper berries. They did all sorts including strawberry bergamot which sounded amazing. The shops were full of delicious fresh fruits- I ate a lot of peaches and nectarines that week, and one say we treated ourselves to a mango. 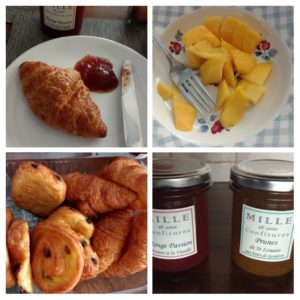 On Tuesday we stayed around the gite for the day- I’d been on a run and after breakfast I sat in the garden and let my hair dry (I didn’t need to use a hairdryer for the whole week as it was so warm) and read- I managed to finish one book, read another one and then start a third during that week so I read a lot! There was a pool so Andy did a bit of swimming but I was happy enough relaxing in the garden.

On Wednesday we had decided to visit a couple of chateau that were further away- the first one was about a 90 minute drive. 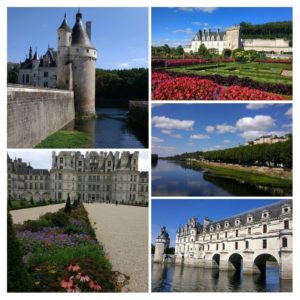 Chambord (bottom left) was more like a palace- it was huge and rammed with tourists. It was a bit like Versailles – a palace built for the royal family but hardly ever used as they traveled about. We shuffled through the rooms and saw more beds and tapestries than I have before in my life. It did have some amazing architecture- a double helix staircase and some very amazing turrets, but I much preferred being outside so we had a walk around the gardens afterwards. We then headed to Chenonceau which was very impressive- the building spanned a river with a ballroom being the room on the first floor over the water. Interestingly the river was the border between occupied France during WW2, so it was used to smuggle people out. The day was fairly overcast when we left, but between the two places the clouds disappeared and so we had a very hot walk around the beautiful gardens there too.

On Thursday we headed to a chateau very close to Chinon (Chateau du Rivau) which was possibly my favourite. It was really quirky, with  sculptures everywhere (including a hole mole coming out of a mole-hill at the castle entrance, plus giant wellies and watering cans in the garden). It had lots aimed at children such as flower fairy gardens (remember those?? I used to love the flower fairies) and had some really amazing sculpture gardens with animals made using garden equipment- my favourite was a peacock where the tail was made with spades and rakes. 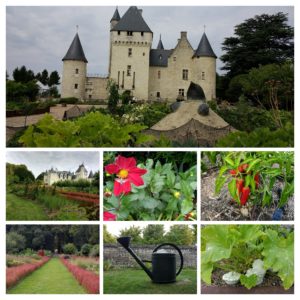 On Friday we decided to stay closer to home- after popping to the shops for some lunch we drove out to a different town (Saumur- a town by the river with a chateau perched on a hill) for a little mooch around we had another walk along the cycle way.

We made full use of the kitchen in the gite and always had dinner there (we are doing up our living room and just had a wood burner installed so we are on a bit of an economy drive). I was very excited to find proper iced tea for sale (not just iced tea flavour which is what things usually are). We tried a few (mint, lemon and green tea) but the black tea with peach won- yes it did have some added sugar, but only a teeny bit- it was 94% black tea with sugar and peach juice concentrate and it tasted like proper brewed iced tea. 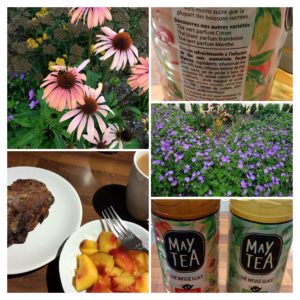 I was very excited to have a chocolate almond croissant too- alongside a huge yellow nectarine and some hot tea it made the perfect breakfast.

On Saturday we were up early to check out and drive to Giverny, where Monet’s garden is (tip- book online as the queue is massive otherwise as it seemed like a “one in, one out” policy too). 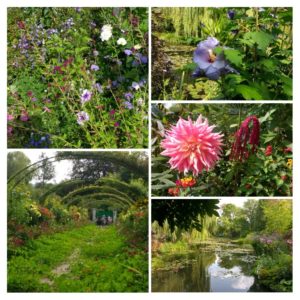 It was beautiful there- of course it had the huge lily pond with everyone trying to take selfies and photos on the bridges, but the more formal gardens were amazing with long rows of flowers- one row would be yellows and oranges, another blues, another purple. We then headed to a supermarket to load up on goodies to bring home (coffee and wine for our parents, jam and chocolate for us) before a night in a hotel. We had about 2 1/2 hours of driving to get back to the tunnel, so we got up early and were on the road before 7.30. Apart from a brief panic in Rouen (a tunnel was closed and no diversion was signed but thanks to google maps we were back on track) the journey was smooth and we managed to get on an earlier train too. We’d bought some chocolate almond croissants the day before and these were a welcome breakfast once we were aboard the train.

It was a very different type of holiday to the one we usually go for- we would rarely stay more than a couple of nights in one place usually- but it was really relaxing without me feeling like I had cabin fever!

What sort of holiday do you like best?  Have you ever been on the tunnel before? I’d only been in the Eurostar as when I was little we would always get the ferry when driving to anywhere on the continent. It was so easy to not even need to pack properly but just throw it all in the boot with no worries about the amounts of liquids or the weight of anything.

2 thoughts on “A week in France”