I follow a lot of the local parkruns on facebook as it’s a good way to see if there are events cancelled, anniveraries or new events coming. 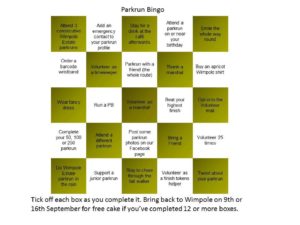 They have produced it to encourage people to volunteer, as they have said if you tick 12 or more boxes you can exchange it for free cake in September. However, a lot of them are to do with running (thank all the marshals/ smile the whole way around/ beat your highest finish/ run the whole route with a friend).

I always get the Bluebird Tea emails as I love their teas, so I was very excited when they advertised sticky chai. It’s black tea, spices and agave (to preserve it I think). Now, from the directions it makes it sound like it would be all ground down, and it tells you to add it to hot milk for a ready made chai latte. 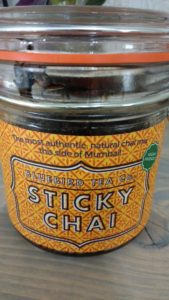 The trouble is, it’s actual tea leaves and big bits of spices- I wasn’t expecting that! It smells amazing but when I added it to the milk I realised too late that I needed to strain it really. Ah well, next time I’ll know. 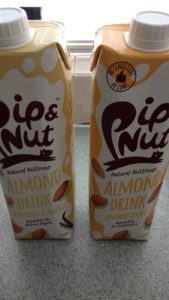 Now, I love Pip and Nut nut butters as their smooth stuff is proper drippy pb, and they do some interesting combinations too. I was excited when I saw they were starting to do almond milk- I tend to go for the Rude Health almond milk, and sometimes Alpro stuff. It was on offer on Ocado so I got one plain, and one with honey and vanilla. Sadly, the honey and vanilla one curdled in hot drinks and even when I used it on muesli it separated in a weird way. It was only something like 2% honey so you couldn’t taste it (and I don’t like things too sweet so I am not sure why I went for it anyway).  The plain stuff has not curdled usually, so long as I pour it slowly into my tea. I might try it again later on, but for now I think I will stick to the two brands I usually use.

What would you put on a parkrun bingo card? What was the last thing that disappointed you?

2 thoughts on “Bingo for parkrun! And a few random purchases”