So, on Saturday I was busy packing all of the cakes into a big Ikea bag (this was my mum’s brilliant idea last time because none of my bag for life bags were big enough for all of the cake boxes) ready to take to parkrun. 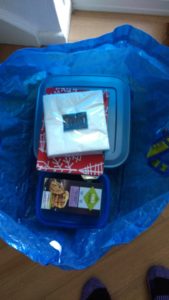 The parking at Ellenbrook is at the uni, and it is a short walk through the car park and along a road to the actual start. There’s no parking at the start as it’s a track and access for the fields, but the RD always parks on the grass next to the track as they have stuff to unload. I walked along carrying the huge bag (which was very heavy and awkward) and arrived to find my parents parking next to the RD’s car- I should have thought it through as they would have let me park there I am sure. Mum had baked loads of cupcakes, and also they had sliced two large watermelons- when we went to South Oxhey someone had brought along watermelon and it was a perfect snack to eat after a run, so we stole their idea! 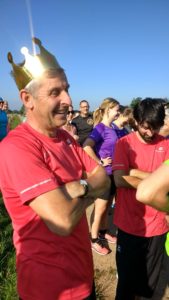 After unloading the cakes onto the table (and then having to balance more cakes on the big plastic box used to store things in….) we made our way to the start. At the announcements (where at first they announced that “Maria’s Dad” was running his 100th- a bit of a joke as for a while Carrie, the RD and our club leader, could never remember his name so used to cheer him past as “Maria’s Dad”) they gave him a newly acquired crown to wear so everyone would know. We also had a regular volunteer earning his 25 t-shirt, so he got a crown too. As my brother had come too we decided to run together (this usually means my pace as they are both faster than me on a good day), and it was very enjoyable. Lots of people congratulated Dad on his way around, and some children who were marshaling with their parents shouted “it’s the king”, so we decided he would be parkrun king for the day (and then I got the Greenday song stuck in my head).

Once we had finished and had our tokens scanned, we saw how well Mum was doing at handing out the cakes. 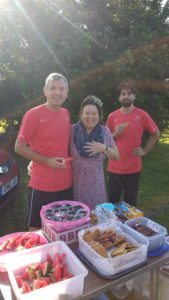 It was lovely to spend the time catching up with people- due to holidays and touristing I’d not been to Ellenbrook all summer. I was the run report writer and you can see my write up here.

Dad was asked to pose with some of the first timers for the facebook page.

After the tail walker arrived and the marshals came back, we managed to give out most of the cakes- all the watermelon went so if you are celebrating any milestones it is a good tip. We packed up the last few bits and then I headed home as I was off to London.

We had tickets to see the only UK screening of Skid Row Marathon– Martin Yelling had organised it after seeing the film, so I’d heard about it on the Marathon Talk podcast. The producer and director (Mark and Gabby Hayes) were coming over from LA for a Q &A after. It’s a documentary about a judge in LA who tries to support homeless people through running. The documentary followed several people on their journey of becoming marathon runners. 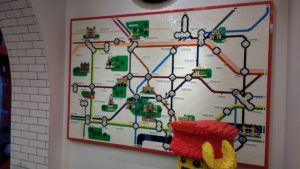 As the screening didn’t start until 3.30, we had plenty of time, so drove to a tube station and wandered around the shops in Covent Garden and central London. I went into Lululemon to browse as I have a voucher but of course I had forgotten to bring it- luckily I didn’t see anything. Andy wanted to go into the Lego store so we had a look- it was very impressive with so many models made of lego-things like this tube map were really clever. We went for a quick lunch in Leon and then it was time for the main event. While we were waiting outside I saw a lot of running royalty including Martin Yelling (of Marathon Talk podcast fame) and his wife Liz (of general running fame) and the founder of parkrun, Paul Sinton-Hewitt. I am not good at speaking to people I don’t know, and with famous people I always think they must be annoyed with people forever coming up to speak to them (and I had met PSH at the parkrun volunteer evening so I didn’t think I needed to talk to him again). I am sure had I introduced myself to Martin Yelling as a listener of MT, he would have been very friendly as he always comes across that way, but he looked busy sorting out the producers and that sort of thing.

I was very paranoid about needing to use the bathrooms during the film as I didn’t know how long it would be or how long the Q&A would last, and as I was heading in to see if I could use them, I bumped into the lovely Anna from Anna the Apple– we’d realised on the Friday night (or Thursday?) that we were both going so had agreed to look out for each other. We had a brief chat which was great (and as Anna had an empty fro-yo pot that set a seed in my mind for later) but then it was time for us to go in.

The film was brilliant. I know I love running, but it wasn’t really about running, it was about how people help and support each other, and about how people need a second (and third) chance, and how doing something like a marathon can be empowering. The people they followed had become homeless (or living in the mission- a sort of shelter) for different reasons (drugs/ alcoholism/ prison) but they were all treated with dignity and respect and other people always helped them see that they had potential. I think I probably cried most of the way through- I found it very emotional. I have only run two marathons but as a person who didn’t like PE and didn’t think I could run, when I actually managed to complete my first one, as something I never thought I would achieve, it really boosted my confidence and I think that has transferred through into other parts of my life. I think this was echoed through the film as the running gave the people the confidence to tackle other areas of their lives, and supported some of them in their battles with addiction. There were light-hearted moments too (the judge commenting that they would run even faster if they gave up smoking, or when they were getting their jabs before going to Africa and told to not attract the monkeys) and his friendships with the runners was really touching to see. I was pretty shocked at seeing the number of homeless people in LA alone- I have been there and with the mild climate in California you tend to see more homeless people than other big cities, but the scale was just frightening. Altogether it was fantastic, and I hope that they manage to get it on streaming services. I enjoyed Senna even though I am not the biggest F1 fan, so I would say even if you weren’t into running, it was still a worthwhile watch. (Andy enjoyed it and he isn’t really a lover of running, but he does like a documentary).

The Q&A was very interesting too- Martin Yelling hosted so he had a few questions before they moved on to the audience. It was all very interesting and I was glad of the time to let my eyes dry a bit!

After it finished the sun was still shining so we headed out to find some fro-yo! 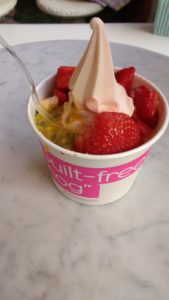 I don’t normally go for all of the toppings (mainly because it’s expensive but also I don’t like crunchy things with ice cream) but I saw someone with the passion fruit on theirs and it looked so refreshing so we shared this pot of pink guava fro-yo with  passionfruit and strawberries- very tasty.

We then had a final wander before getting the tube back- we even got home in time to watch the first episode of the next series of Narcos- it’s on Netflix so we have to be restrained and only watch one a night!

Do you like documentaries? We watched a brilliant one the other day called Chasing Coral (also very sad, as it was about the coral bleaching linked to climate change).

3 thoughts on “Another parkrun milestone and a brilliant cinema trip”