This weekend we had planned a family outing to Hatfield Forest parkrun. Last year we visited Wimpole Hall, one of the parkruns that take place on National Trust grounds, and had decided that we should try and visit a few more, with Mum in tow, and sample the cafe after to make it a bit more of a morning out. 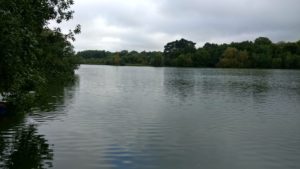 Hatfield Forest, in Essex very close to the Hertfordshire border, had been penciled in for a while but I found out recently that it is due to relocate to Bishops Stortford (in Hertfordshire- my quest to do one county seems never ending!)- their news page had information about why if you are interested. So as we could not manage next weekend, this weekend was our only option. (If you look at it on Trip Advisor there is a review which starts off with the person saying that it is nowhere near Hatfield in Herts- I wonder if they went there first?)

It’s around a 40 minute drive from here, but they close the gates to the car park at 8.40 (the course uses a bit of the road, but as we found out it’s also a bit of a walk from the car park to the start) so Mum and Dad (with my brother in tow) picked me up just before 8am. It was so much colder than earlier in the week, so I opted for a t-shirt, a long sleeved running top over the top, and my OH hoodie. I was glad of three layers and could see my breath as I stood outside.

We arrived in perfect time (driving past a DFYB sign and commenting that if anyone had forgotten their barcode, it was a bit late for it now), and were welcomed by the car park marshal who asked where we were from and then told us he would see us for the first timer briefing in a bit. They closed the gates shortly after we had parked. There was a huge queue for the parking machine, but as we are all members we initially opted to leave one of the membership cards on the dashboard. Mum then decided she should queue up, and it was ticking closer to 9am she told us to go ahead.

We walked through a little wooded area and then around the lake before arriving at the cafe/hut where people were assembling. We hadn’t dawdled but it was gone 8.50 so it turned out we missed the first timers briefing. Never mind- we knew it was a one lap course so it would be a case of following the people in front- no need to count laps. I’d brought a bag so we left out jumpers in it- I kept my long sleeved top on as it was still cold. We kept an eye out for Mum, worried in case she’d got lost, but just as we started Dad noticed her so we could relax.

After the main briefing we walked the short distance to the start and headed off. 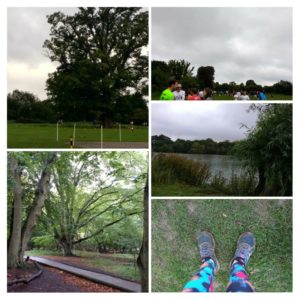 The route was fab. We ran up tracks through rows of trees, over little ditches, through big muddy puddles and there were even some tiny logs to jump over. It was mildly undulating but not really hilly- a few short gentle up and down hills but nothing tough. Although it is called a forest, there were also patches of the run through fields (dodging the mole hills). The little ditches were the most fun but they were hard as you needed momentum to get up the sides without slipping. Dad said he had heavy legs as he had cycled 100km on Friday and I was worn out by a week at work, so we were chatting and not worrying about time (as per usual).

The thing about one lap routes is that the km markers seem to appear so quickly – I felt like we had just gone around the first corner when we saw the 1km marker (although my dad never notices them!)- at one point we ran through a gate and past the 3km sign, and then had a lovely long downhill. We then ran through the car park and Dad commented that he hadn’t seen any markers and had no idea where we were- as he said it we passed the 4km marker, and the route then went the other way around the lake (if you look on the picture of the route, we would have walked clockwise around the lake to the start). We then had to run uphill slightly towards the finish- my brother (who’d been a little ahead of us most of the way) got more of a lead. We rounded the corner and Dad said “it feels like we are close now as everyone is speeding up around us”- I pointed to the finish area (which he hadn’t noticed) and he broke into a sprint finish.

As we finished it turned out that my brother had left his barcode in the car- schoolboy! Dad went with him while I stayed and chatted to Mum. She had acquired a carrier bag full of plants while we were running (she does love a bargain)- she’d wandered to the shop but it was closed, and outside were some plants that had been nibbled by deer, with an honesty box. One of the plants had orange flowers and she knew we have been making an orange and purple flower bed so she’d decided to get them for me.

While we were waiting we chatted to a parkrun tourist who I recognised from Heartwood Forest- back from touring in the US (one day…).

It took them so long to get to the car and back- we were waiting for about 20 minutes and I was starting to worry that they would start packing up! Luckily they got back before the tail walker, and then we went to find my bag and put on our extra layers- it was pretty cold and damp. 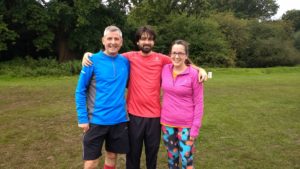 Mum had looked at the cafe but it was really a hut with lots of picnic benches outside- this would be lovely in the summer but it was cold and rain was forecast. A quick look on google showed us a Bill’s (my choice) and Wetherspoon’s (everyone else’s choice!) close by in Bishops Stortford, so we walked back to the car and headed there. We didn’t even get back to the car until around 10.10 and then there was quite a bit of traffic in the town. The car park we found was a 5 min walk from Bill’s, so we headed there for hot drinks and pancakes. 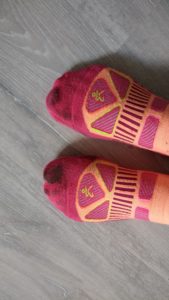 Even my toe nails were muddy after that run- great fun!

I am so glad that we managed to visit there- the new venue in Castle park will be worth a visit too, but Hatfield Forest was really pretty and I am sure we will head there at some point with our NT memberships for a walk, so even though I won’t parkrun there again, I shall be back.

2 thoughts on “Hatfield Forest parkrun (not actually in Hatfield…)”