Event teams do not have a put on a parkrun on Christmas day, but many of them choose to. I know that for some people, going running on Christmas day seems crazy, but parkrun isn’t just about the running- it’s so much more about the community. For some people, this may be their only chance to be with other people for that day, and for families it is a great way to get some fresh air before spending the day inside.

I love parkrun (had you noticed?) and running, and so was very pleased that Panshanger had decided to put an extra event on. I knew it would be busy as not many other Herts events were on, so I parked a little way away and ran there- turned out I was more like 1.5 miles than 1 mile, which meant I was running pretty fast at the end! I’d worn my festive leggings and also a hairband with “Merry Christmas” on it, although at one point it was so windy the hairband blew off! 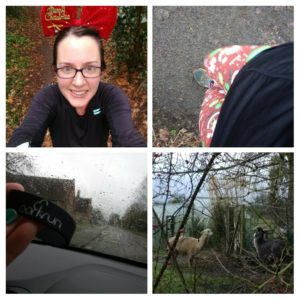 I also ran past some llamas (fa-la-la-llamas if you will….) on the way, but didn’t have time so had to stop on the way back for the photo!

The actual parkrun was fab- it was very busy at the start (Panshanger begins in a car park and them immediately goes through a gate and onto a path through woods, so it is always a bit stop start)- there were 364 runners to squeeze into the gap so no surprise there. I wasn’t in any hurry so just walked a bit and waited for the way to clear. Looking up and seeing the sea of santa hats was just great. It was my 130th parkrun ( a good round number to get to on Christmas day too). It started raining half way around, so I didn’t hang around much after having my barcode scanned as I had to run back to the car too- it was properly raining once I got to my car.

Then it was time for a shower, breakfast and a bit of present-opening (which by the way, was nearly as disaster as recently we had to get a new fridge-freezer and Andy suggested that we did that as our Christmas present- it was only recently that it got mentioned and it turned out he was joking- how was I meant to know???)- I got some lovely cosy penguin pj’s, some Bluebird tea (surprise!), Lush shower gel, orange oil for my vaporiser and some ginger muscle rub.  Andy was happy with his whiskey and particularly enjoyed playing with his new fire set (no idea of the actual name, but a poker and other things to poke to fire with basically). We had decided to have lunch at home, as often I go to my parents and Andy goes to his, and we thought having more time at home would be a bit more relaxing too, so we had a bit of time to listen to music before lunch needed putting on.

After lunch (goats cheese and caramelised onion tarts with roasted sweet potato wedges, broccoli, carrots, green beans and mange tout- no sprouts thanks- and a bit of Christmas pudding) we felt the need for some fresh air, so we had a quick walk before loading the car up and heading over to St Albans. It’s a bit different now there are little children involved- we’ve got a nephew (4 months old) and two nieces (10 months and nearly 2 years) and we were trying to sort out visits to both houses around their nap times, but it turned out that they all just kept going for the whole day. The afternoon was filled with general relaxing, a bit of present opening (with my family we did a secret Santa- I opened a present, finding a nice navy jumper, only to be told that was my brother’s as they had the wrong labels on them!), going between both houses to make sure we saw everyone, and a bit of cheese and pickle in the evening (I love piccalilli). 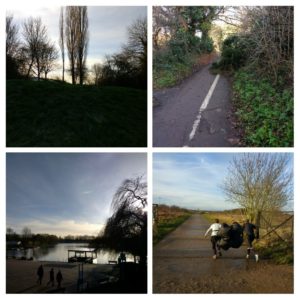 On Boxing Day I’d been persuaded to meet with the OH ladies for a training session including using a parachute! I’d planned a long run, so I decided to run there (about 4 miles), join in with the session and then run home. I missed the first part of the session (they run around a small loop in pairs in opposite directions, and when you meet your partner you both turn back around and try to beat the other person home)- and I was really wishing I’d worn gloves as the wind was so cold.  I saw a few more fallen trees on my way there too. The parachute session was fun- there’s only one, so while we were waiting we did a bit of a speed session- running up and down the taxi-way, with the person at the back having to overtake and go to the front of the line. Running with the parachute felt very weird- you had to work hard against it but you also felt a bit more stable than normal sprinting because it was lifting you up. Good fun anyway, and I was glad I’d made it, although after getting home (10 miles in all) my legs were pretty sore. 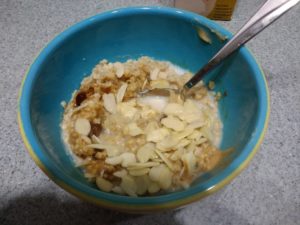 Mince pie porridge helped me to warm up a little while I waited for the water to heat up (this is just porridge with some of the Meridian mince pie filling stirred in, and then topped with a few flaked almonds). Now the trouble is, the days are already merging and I have no idea what I did for the rest of the day! Probably a walk, possibly some baking of some sort, who knows! Although we did watch Muppets Most Wanted in the evening (my turn to choose the film)- I can’t resist singing along with all of the songs!

Did you have a good Christmas? Do you like to get some fresh air? We often used to have a bike ride or walk when I was little, but it’s harder to time that so it’s still in the light if you have a bit of a later lunch.