So last Tuesday was my last day of the holidays- I went on a run first thing, did a bit of work and a bit of pottering, and then walked the long way (5 miles) to town. Then just like that it’s back to work and as if the holidays didn’t even happen!

I’d ordered some tea from Bluebird in the sale (how nice does Mince Pie tea sound??), and it all arrived during the week. I’d ordered quite a bit and they included a few free bits, including a bag. I have one of their bags already and always use it as it rolls up nice and small (although since it went through the washing machine it’s a bit more wrinkly!). 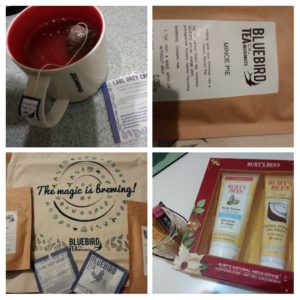 While in town I popped into Sainsbury’s to get some peanuts (and this is why we do online shopping because I can’t just get what’s on the list…)- I ended up looking at the reduced stuff, and found a couple of Burt’s Bees things- a set with foot cream and body lotion, and a little glass thing (maybe for candles?) with lip balms- I usually keep a lip balm in the car and for some reason this brand doesn’t seem to melt as badly as other ones, but recently I’d lost it. Anyway, the glass thing didn’t have a price label (or a barcode)- I asked someone if they’d find out how much it was, and she came back a bit later and told me I could just have it because it was probably the last one and they had no idea of the barcode or anything. It was very kind of her (as I am sure they would have an emergency code to put things through on the tills) but I felt very bad going through the self checkout in case someone else asked me what I was doing with it.

Yoga wasn’t on this week, so on Friday when I got home I did the “homework” set for us- it was around 35 minutes in the end I think and I felt a lot better after. I keep thinking I need to try and find some time at the weekend to add in an extra session, so following this routine could be the way to go. 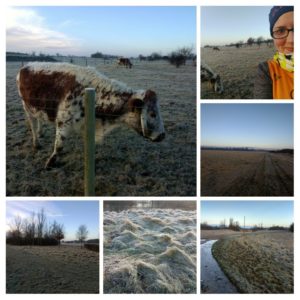 On Saturday I was off to Ellenbrook- it was so frosty!  We’d gone out on a walk on Friday evening, and although it was cold, it didn’t seem that bad, so I hadn’t covered my car. This meant I left later (after scraping the car) and only just got to parkrun at 8.55! Dad was marshalling one of the final points so he was still there, not needing to head off until after the start, so we had a little chat before the main briefing.

The course was really icy, but actually much easier than the boggy mud of the last few runs. There were huge frozen over puddles to avoid, and the first path was a bit slippery, but the grass was nice and firm, with the ground not quite frozen solid. At one point I took my phone out to take a few photos, but then decided that I’d have a cool down run and take some then instead.  I really enjoyed the run- I chatted to a few people I knew in the first couple of kms, and then just enjoyed the scenery and greeting the marshals (I knew the last 3). I finished (29.07- a couple of minutes faster than the boggy ones), got my barcode scanned and then headed off towards the fields to take more photos. On the way back the long-horned cattle were right by the fence, and as I’d worn my cow cowl I couldn’t resist getting a cow selfie (cow cow cowl selfie…). As I ran back to the finish to collect my coat, a couple of people stood by the finish line were staring at me looking very confused (as I had on my apricot vest)- I had to call out that I’d already finished and was just taking a few pictures as I think they were worried I’d got lost somewhere.

After the run I headed over to Mum and Dad’s- Mum made us  little drop pancakes alongside some mango and blueberries (and of course, tea). I’d taken clothes to change into (and how weird is this?? I found the missing lip balm in the pocket of the hoodie I’d chosen- no idea how it got there but so strange that I found it a few days after getting a replacement), but in the end Dad insisted on getting me a fleece to go over my hoodie as I wasn’t really warming up as much as I thought I would. I then took Mum to Bunnings (a DIY shop) as I wanted to get some bird feeders for our garden and she hasn’t been well and fancied an outing.

Then once home it was time for a bit of pottering in the garden, a walk into town and then watching a film in the evening.

On Sunday I headed out for a long run, but the pavements were really icy and slippery so I ended up veering from pavement to verge to road. 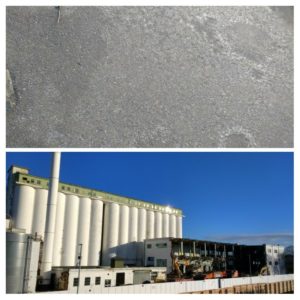 The demolition work at the Shredded Wheat factory has moved to another building- I find it fascinating to see how they are doing it (I really thought they might just explode it) but it’s going to take years. I thought I was going on a 7 mile route, but it ended up being 8 miles, so it was a bit of a rush to have a shower as Dad was popping by to look at our front gate and help us take some logs to the tip. 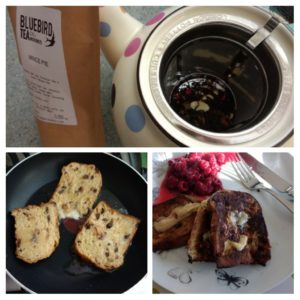 It was time for brunch after all that- we tried out the mince pie tea (it’s black tea with almonds, orange peel and cinnamon) and I made some French toast with a little panettone (plus maple butter and raspberries). We walked to the shops to get some bits for the garden, and then suddenly I felt really tired. I’m not sure why, but I ended up sitting in the living room looking at the garden for ages.  I did think that perhaps I’ve not run that far in a while, but I think I ran 9 or 10 miles on Boxing Day (with the parachute training in the middle) so I’m not sure. At least Monday was a rest day! We went to the cinema to see Jumanji- I remember being very scared of the original one, but this one was very funny, not taking itself too seriously, and was a good way to spend a few hours in the warm.

Do you do online shopping or get tempted by things in the shops?  Did you manage many parkruns over the festive period? Do you put out bird food?  When we moved there were lots of old bird feeders in our garden but filled with mouldy bird food- I am going to make sure I check on ours so that won’t happen.