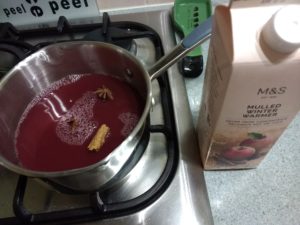 We are still working our way through the Christmas food and drink- we were given some lovely items as a sort of hamper, and had also bought a few things ourselves, and last weekend was the turn of this mulled winter warmer drink- basically apple and cranberry juice with spices. We had one cup each on Saturday, but it wasn’t the spiciest so on Sunday I added some cinnamon and star anise when warming it up- just like the Christmas markets. 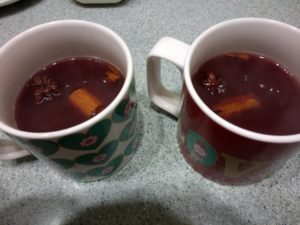 On Sunday after a long run (10 miles, on a new route that I planned and then it turned out I had run it already according to Strava…) this was perfect alongside tea and breakfast. We spent some time in the garden, building a log store (from flat pack, not scratch!), which took a while but luckily it didn’t rain. 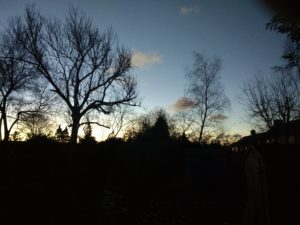 It’s been a fairly standard week- rest (walk) on Monday, OH club run on Tuesday, yoga on Wednesday and a run including some mini hill repeats on Thursday. On Friday evening I was out for dinner with some colleagues, and I was going to walk in as it’s just over a mile, but Andy wasn’t happy about me walking back on my own late at night, so I ended up driving in which annoyed me- If it was the two of us we would have walked back together fine, and so it’s frustrating that because of safety (or perceived safety) I had to drive instead.

Anyway, Saturday I had decided to go to Westmill parkrun. I’ve run there once and marshalled once, and fancied running it again. I’ve been to Ellenbrook and Panshanger loads over the Christmas holidays, so I fancied a change but as we were in London later I couldn’t stray too far. 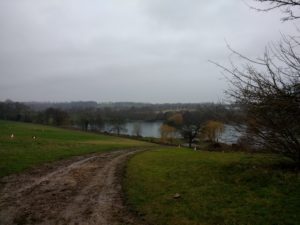 Westmill is such a lovely location, but it was fairly dreary at the weekend- it was raining gently as I got there and it just got harder as the run went on. The route it just under two laps (you walk up a bit to the start area) and it’s not flat. They warned us to take it easy on the steepest downhill section- I knew I wasn’t going to come away with a course pb, but I didn’t want to linger as it was cold. I had worn a long sleeved thin base layer and a t-shirt, and had a zip up long sleeved top in the car. At the last moment I decided to wear the top for a bit, thinking I would tie it around my waist once I warmed up- well that didn’t happen! It was slippery and muddy but still very enjoyable and I will be back again. The marshals are fantastic (at the top of the hill were two children and their dad- one child was high fiving while the other was calling out your number- I think I was runner 57, and later one marshal called to me that she had legging envy as she liked my purple ones). When I finished, one of the volunteers was using her phone to scan barcodes- I ended up chatting to her mum (who I recognised from Panshanger parkrun and the parkrun tourist group)- she recognised my name when scanning my wristband so we chatted for a minute- I’d heard them talking about the new app on Marathon Talk so it was interesting to see it being used, although as it was raining quite hard I think the phone was struggling a little more than the scanners (but one scanner had stopped working which I think was why they were using the app). Anyway, I didn’t hang around as the rain was turning to sleet and it was so cold- it was a short jog up the hill to the car park, where I decided to not even attempt to swap shoes for the drive home as I didn’t have spare socks. 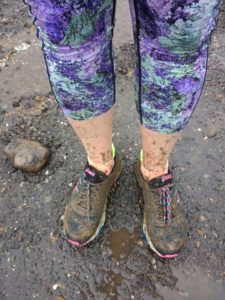 I took off the jacket and put on my coat in an attempt to warm up a bit, but it was freezing. I do not envy the marshals one bit. I finished in 30.02, and last time I ran 29.30, so I was quite pleased. Plus last time I stopped to walk at the top of the hill the second time around, and this time I ran the whole way. I think once the ground is less slippery I could aim for something quicker. 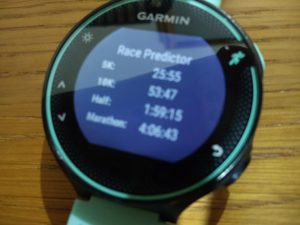 Although not this fast- I found out the other day that my Garmin has a race predictor feature- it thinks I should do 25.55 for a parkrun (yes I know parkrun isn’t a race, but it’s a timed 5k and I don’t really do 5k races because I do parkruns all the time…)? I suppose the 10k time is close- I have run 54.53 a few years ago, and the same with the half (I’ve managed one sub 2 in Brighton, and although it turned out to be a few metres short, if I had carried on with my average pace I would have still been under 2 hours). The marathon though? Seeing as last time I just scraped under 5 hours I’m not sure where I’d get all that time from.

(Also, it was my 136th parkrun, and with some weird number magic, I have run 36 different courses, 53 at Panshanger and 24 at both Ellenbrook and St Albans, then 2 at Westmill and 2 at Hove Prom- I quite like all that symmetry)

Once home, showered and having eaten breakfast it was time to head into London. We had tickets for the Wildlife Photography Exhibition in the Natural History Museum (fun fact- if you have tickets you can skip the long queues at the entrance). 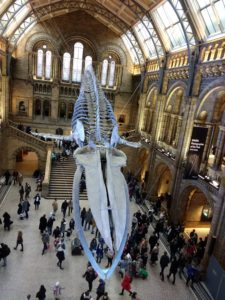 I’ve not been there for years, so it was great to have a wander around before going in to see the photos. The exhibition itself was amazing, although there were themes about how humans were affecting the animals, and one of the portfolios contained such a shocking image (it was part of a portfolio about poachers hunting rhinos) which actually made me tear up it was so awful. There were entries from children (in a separate category) which were equally as impressive. Anyway, we must have spent a good 90 minutes just inside the exhibition. We had timed it to match with the Lumiere festival, where light installations are all over London for one weekend, so once it was dark we headed outside. We managed to find a few of them, all impressive in different ways, before heading to Mildred’s (a lovely veggie restaurant) as we had vouchers. The one in Soho was jammed, so we got the train over to Kings Cross and walked up to the one there- still busy, but only 30 min wait for a table. I was totally starving, as we had not had lunch, only a nakd bar (we were going to get some tea and cake, but all the cafes by the museum were full or outdoor seating only, and it was pouring with rain, and in the museum itself the cake was over £4 a slice so we didn’t bother), so we shared some guacamole and corn chips to start- they didn’t last very long! After dinner we wandered back to the station as there were more lights around there- and huge crowds too. 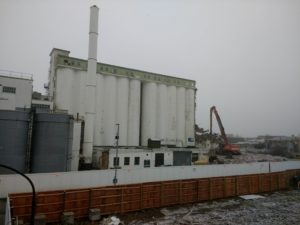 The demolition of the Shredded Wheat factory continues

On Sunday morning I did a slightly shorter long run, of just under 8 miles. The forecast was for snow all morning and possibly icy pavements, and we were going to the cinema at 11.45, so I didn’t want to be out running too long. When I left it wasn’t snowing, but as I ran it started, and gradually got heavier. By the end I had snowflakes going in my eyes, and each time I stopped my glasses fogged up so I had to keep going really! 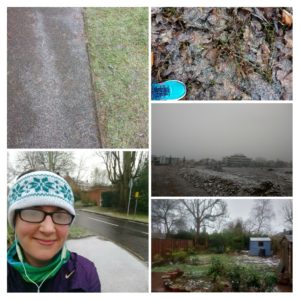 It was really cold though and I was glad of my ridiculously thick headband to keep my ears warm. Then again, a quick shower, breakfast and hair-dry and it was off to the cinema to see The Post. It was a brilliant film- I didn’t know much about the story it was covering, but it was very interesting, and with the stuff going on in the US at the moment, was very fitting.

Do you like going to museums or exhibitions? It’s the first time I’ve been to this one (a friend recommended it to me) but I found it brilliant and would definitely go again in future years. Have you ever been to a light festival? This was certainly better than the Nottingham one we went to a few years ago. Do you think race predictors are accurate?