That’s two sort of opposite things right there!

But first, the week: Monday was a rest day, and after work we went to see Jumanji. I don’t remember the original film very well (just that it was scary) but this one was pretty funny so a good way to spend a couple of hours. I was really pleased to actually manage a club run on Tuesday- since November time things just went wrong (bad traffic/ late meetings/ run leader being ill) and I think I only managed one. We met up for a planned 4.5 mile fartlek run- we ended up warming up for a mile or so, doing alternate slow jogging/ faster jogging/ sprinting between lamp posts, and then running steadily for the last bit to total 5 miles. It was great because someone came out with us who usually ran parkrun distance and had once run 4 miles- she was so pleased with herself for managing the 5 miles so it was great to celebrate with her. I managed my fastest time going up the road with the lampposts which I was pretty pleased with too.

On Wednesday yoga was back on after the Christmas break, and it was fantastic. There were lots of new people (including a couple from my running club) so the teacher kept it a little more gentle. I was glad I’d completed the “homework” a few times (we were emailed a sequence with warm ups, strength exercises, options for the middle bit and then cool down) as I think usually after a break m arms would struggle in the downward dog. I always sleep well after yoga too and this week was no exception. 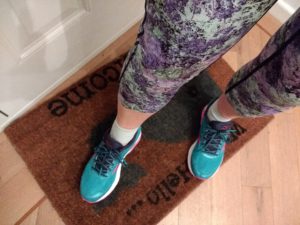 On Thursday I headed out for a 4.5 mile run- I was originally going to do some sort of lamp post interval but as we did that on Tuesday I kept it steady. The new shoes are so comfy- I really wish I’d changed over sooner as these are just like running in springy slippers or something. 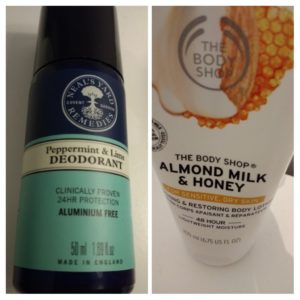 I’ve tried out this deodorant as I would like to use a more natural product. This is the best of the ones I have tried, and the smell is not too strong which I prefer. I’ve been using this Body Shop lotion at the moment as after a run my skin gets very sore- I try very hard to not go from cold to hot quickly (the number 1 cause for the chilblains too) but even if I wear a buff and potter around at home for a bit before a shower, my skin will go red and get all itchy. This cream does sooth it, plus it smells amazing too. My only complaint is the packaging- I don’t know why it isn’t in a tub because I have to cut it in half and scoop out the cream after a while as it doesn’t squeeze out very well. I do like the Lush pots that you can swap for a face mask too. 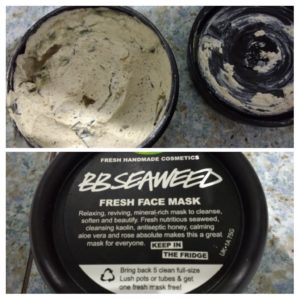 For my last face mask I tried out this seaweed one, and it’s really good. It makes me feel like I am channelling Mrs Doubtfire. Last time I tried the Oatifix one, but that was so thick it was hard to keep it on your face. 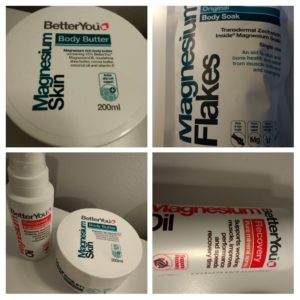 I was sent these Better You magnesium products a while back and have been using them after running. Magnesium helps with muscle recovery as well as sleep, and I do have some supplements that I take (when I remember….), particularly when I’m not sleeping well.  Applying it to the skin directly can result in faster absorption rates, plus some people may find it easier to use this than remember to take a supplement.   I was sent some flakes (saving these for after a super long run), body butter and spray.  The Recovery Spray is easy to apply (just spray on) but I did found that it stung a bit- initially I wondered if it was down to sensitive skin/having just shaved my legs, but I tried it on my arms and it was the same. According to the bottle, the tingling indicates a magnesium deficiency and will reduce once you levels go up. The Body Butter has a lovely scent- with coconut oil, cocoa butter and shea butter- it’s rich but not overpowering. It takes a bit of rubbing in,  but I haven’t found any stinging or tingling with this. They are all suitable for vegans and are not tested on animals.  As well as being available online they are on sale in Holland and Barratt and other health food stores.

On Saturday I was off to Ellenbrook to meet my dad and brother- it was Dad’s first parkrun since his little knee op and he was really looking forward to it. For the last few visits I’ve arrived pretty late- I always forget how long it takes me to drive over to Hatfield. For some reason today I was early (8.30), so I had a little run around the surrounding streets before it started. This very much confused Dad as he parked close to my car and then could not work out where I was! Anyway, the run was good fun- there are still some big puddles but most of the paths were OK- we ran around together at 9 min mile pace – Dad had been saying he felt tired but then as the finish came into sight he wondered if we should go for it- I said yes and we started speeding up- he was going to slow and let me finish ahead but he was way ahead of me (well, one second) so he stayed ahead- just before I got to the finish a lady overtook me and promptly apologised- she’d heard us say we were going for it and decided to try and keep up with us. Of course I don’t mind her going past me- it’s a timed run and not a race, and it’s all good fun.  My 135th parkrun and a little quicker than last week (the ground is getting better at 28.39.

I planned to walk over to the Galleria (a sort of outlet centre) as I wanted to look for some cheap tennis balls, and was going to go to Aldi on my way back to the car, so I changed trainers to less muddy ones and added a hoodie and coat to my layers. When I got to the shops, they weren’t actually opening until 10am, and I realised that it would be a while before I got home, so went to Caffe Nero for a toasted teacake and cup of tea. 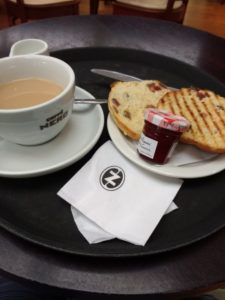 After not finding any cheap tennis balls, I walked over to Aldi- I was only after a few bits (chia seeds for porridge, nice cereal bars, maple syrup) but ended up being tempted by maca powder (with vitamin B12 apparently), cacao powder, stollen bites and biscuits. Not such a healthy shop! 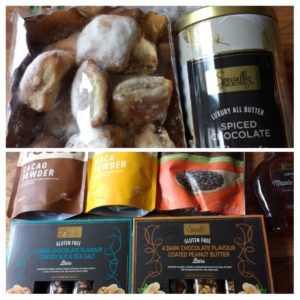 When I got home it was power tool time! Well, I had to wait for the water to heat up for a shower, so I thought I may as well do the hard work all in one go. I wanted some bits of wood for work (another teacher is going to burn some numbers onto them with a special pen) and we have piles of wood in our garden. Andy gave me a quick lesson on using the electric saw before he was heading out. I was never a fan of D&T when I was at school (I spent several weeks using a hand drill that looked like a little egg whisk to drill holes in some metal so that I didn’t have to use the metal heater thing to bend it) so this was not my forte. 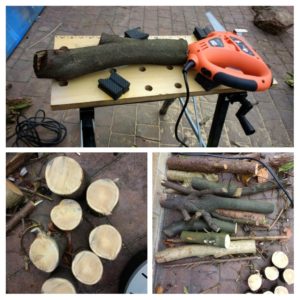 It was slightly terrifying (even though it only works when your hand is on the trigger) and also really hard work as it vibrates loads. I managed to saw up 10 pieces and the plan is to do the rest tomorrow- I was tempted to do a few more but my hand and arms were getting tired so I decided to quit while I was ahead (and still had all my limbs). After that I got on with the garden jobs within my comfort zone (no power tools needed)- raking the lawn, sweeping the moss off the patio and putting leaves in the compost.

It’s been lovely to have time pottering about in the garden. With the days so short, I am only at home in the light at the weekends, so it’s nice to actually make the most of that time. After putting up new bird feeders (for seeds) last week, I noticed another old bird feeder stand, so I got a little cage thing to hold fat balls (I did have a long debate with myself about buying them because they contain animal fat, but in the end the stuff I read about birds needing food at this time of year won- I’m not going to eat them, and I suppose lots of vegetarians have dogs or cats and buy them meaty pet food), and put it out this morning as soon as I got back from parkrun. While I was hanging it up, I noticed a robin on the compost bin- it then hopped to the fence and then down to the feeder- is this a record for shortest time for a bird to find the food? 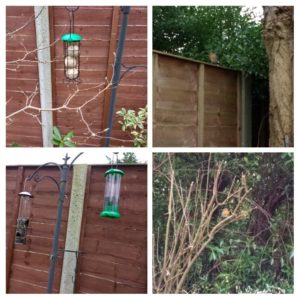 Mum and Dad lent me some of their old binoculars, and already I’ve seen a woodpecker, the robin plenty of times and a little blue tit. I’ve around moved the plants on our dining room window sill so I can sit at the table and have a view  of the garden (the biggest one was in the middle and blocked a bit of the view before), so I had a leisurely lunch watching the garden.

Do you like bird watching? I used to be a member of the YOC when I was a child, but my knowledge has faded a bit. I do like seeing birds in the garden and find it very relaxing to sit and watch. Have you tried any new beauty products recently?  Do you like shopping in Aldi? Where we used to live was about a mile away so we would sometimes walk there and get a few bargains, but now we have moved it’s not so easy. We have a Lidl a similar distance away and although it had good Christmas things, the regular items don’t seem a nice as the Aldi ones. Although we are supposed to be getting an Aldi in WGC so I may be able to walk to one again.

*The magnesium products were sent to me in exchange for a mention on my blog. All opinions are my own.