The Easter holidays have been a good balance of relaxing, running, baking, getting on top of work, catching up with friends and jobs at home. 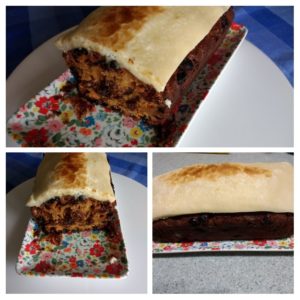 I made a simnel cake and decided to have a go at toasting the marzipan. As I don’t own a blow torch, I put it under the grill and it seemed to work well. It smelled incredible while it was toasting too.

On the Tuesday morning after the Bank holiday I had a 6 mile run in the morning, before spending the rest of the day doing work.  (I probably had a walk in the afternoon, but I now wish I put my walks on Strava too as it turns out I cannot remember without checking on there to see what I did).

On Wednesday I drove to the outskirts of St Albans and walked the rest of the way in, first up for a shoulder and back massage, and then to meet some friends from work for brunch. 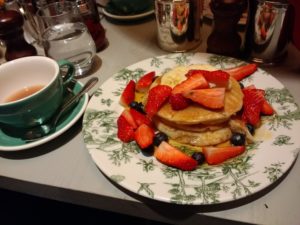 We went to Bill’s, so I didn’t even need to see the menu as their pancakes are one of my favourite breakfasts.  After doing a few jobs in town, I went to see my parents and ended up staying for a lot of the afternoon, just sitting in their kitchen watching all the birds in their garden and catching up with them. 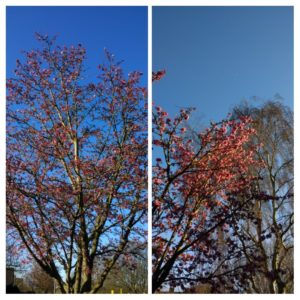 On Thursday morning the weather was beautiful. I had a lovely run (5 miles) and saw so many trees covered in pink blossom. A day of work followed, until 5.30 when I walked into town as I was having my hair cut. I have been going to the same hairdresser for years now, and she of course knows how thick my hair is, but she always gets someone to help her dry it, and I always have the comments about how thick my hair is. I think it’s a compliment, but it’s weird because it’s nothing I do, I just have thick hair. I suppose it’s like tall being being told constantly that they are tall. I know I have really thick hair, but I don’t really know what to say when people tell me.

On Friday I was meeting up with friends, and thankfully it was another beautiful day so I walked to my friends house (although it was a little further than I thought- walking takes a lot longer than running!), and later enjoyed a walk in the woods.

Onto the book. A while ago I was sent the book Run Mummy Run by Leanne Davies and Lucy Waterlow 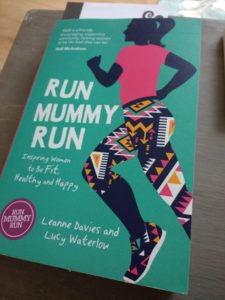 When they offered to send it to me, I did explain that I am not a mummy, as I wasn’t sure whether the book would be aimed at me or not. I had heard of the facebook group, as a lot of the women in my running club are in the group, but I’d not looked into it any further.

After reading the book, I would say it is a great book to get for someone who is just starting out with running. The chapters cover topics like staying safe when out running, walk/run intervals, injuries, races, fuelling, training plans ranging from beginner 5k plans to improver marathon plans, and even a section called “Pay it forward”, looking at running groups, volunteering and cheering at races (and even has tips on how to set up your own parkrun).  There are some sections aimed at parents (including specific sections on running while pregnant/breastfeeding and so on), but I just skipped over the parts that weren’t relevant as most of the book was. It did cover some female runner issues not linked to parenthood too (e.g. infertility, chafing). The book was sprinkled with anecdotes and little stories from RMR members and this made the book feel a bit like reading a magazine with lots of different people contributing to it.

Since I started running (back in 2008) the advice around nutrition has really moved on. The book talks about everyone being different, and making sure you are adequately fuelled, but mentions that you can probably run for an hour in the morning before breakfast. Personally I can run much further before breakfast, having worked up from 3 miles to around 15 miles. But when I first started running I remember feeling so terrified that I would collapse while out on a run, because I had read so much information about making sure you eat a snack before you go, and eat as soon as you get home. Of course everyone is different and we are still learning things about the human body, but I felt it was refreshing to read a different take compared to most of the running literature.

I would have found this very useful when I first started running, so if you know someone jut starting out then it would make a great present for them. You can also check out the RMR website for other articles based around running.

Do you like reading books about running? I have really enjoyed the Angharad Finn books (The Way of the Runner and Running with the Kenyans), and Rosie Swale-Pope’s book Just a Little Run Around The World.

Do you like to read? And if so, when? I always read before I go to sleep, but in the holidays I quite like reading for a bit in the afternoon too, with a cup of tea of course.

Do you have something that people always comment on? And if so, how do you respond?

*I was sent this book in exchange for a mention on my blog. All opinions are my own.