Onto the next part of the Easter holidays (which was now over a week ago!): Saturday was Ellenbrook Field’s 100th parkrun! I met Dad there (he had cycled and I drove) and we ran together. At the start they remembered the runner and also the mayor who had both died recently and been involved in parkrun. They also mentioned something about the 100th runner, but I didn’t really hear that.

Ellenbrook at the moment has many puddles- last week the finish runway was completely submerged (you can see the photo on their news page), and this week the runway had totally dried up but there was a huge puddle at 3.5km.

We ran together, and when we reached the puddle there was a choice of a diversion through a field- we went for that as the puddle was knee deep on very tall people, and the ground is very rutted so as you could not see the ground it would have been easy to fall and twist an ankle (you can see the little diversion we took in the map above).

At the end of the runway I said to Dad that he could push on if he wanted to, as he is faster than me. We had kept a good pace (9.05, 9.07, 9.04) and he thought about it, but then decided that we would finish together. As we ran past the start, we pushed a little to try and overtake a couple of other runners, and as we reached the finish we could hear the volunteers shouting out numbers- 98, 99- I got a big cheer as Dad let me cross ahead of him and I was given token 100!

I thought that was it, but in chatting to people after it turned out I had won a prize – not one but two dresses (t-shirts) for the Herts Year of Physical Activity. Great- I needed new decorating clothes 😉 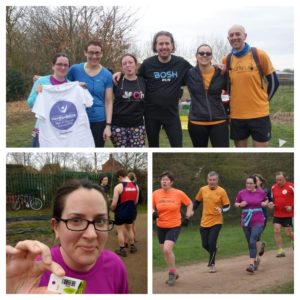 After chatting for ages, I headed to Mum and Dad’s for pancakes. My sister and niece were there, so it was lovely to spend time with the family. 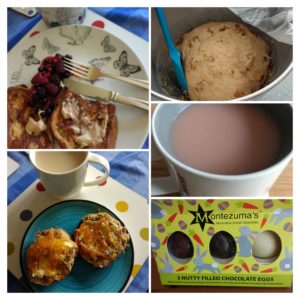 Later on Saturday afternoon Andy’s parents came over, so I made some hot cross buns. We had asked to borrow some hedge cutters as we needed to trim a rather out of control hedge in preparation for our new fence being put up, and Andy’s dad ended up helping with it and spending a few hours in the  garden cutting it down with Andy. 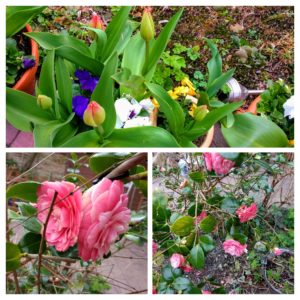 The garden has started coming to life a bit more now- some of the tulips are flowering so there is a bit more colour.

On Sunday I had a longer run in the morning, 7.5 miles, before it started raining too hard. I spent the rest of the day doing work, before having a walk in the late afternoon to get a bit of fresh air and stop looking at a screen for a bit. I did a little more wallpaper stripping too- it’s getting there slowly.

It was Andy’s birthday on Monday, and he had taken the day off work so we walked into town to get the train into London. We went to the Museum of London, which I’d never been to before. It had the 2012 cauldron and lots of information about it (each part was shaped differently and given to the countries that took part after the Olympics finished). We walked all around London, and ended up having a late lunch at Mildred’s (a lovely veggie restaurant) before getting the train home.

On Tuesday I had to be in all day as the fence was being done. I went out on a quick run first thing, just to get some fresh air and steps, and then had to hang around at home, pottering about while the guys were in the garden. 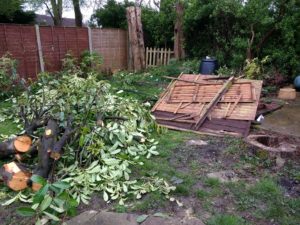 That photo shows about half of the laurel bush that had to come down before the fence was put up (to be fair the guys said they could do it with the bush there, but it was easier for them if it was gone) and then the old fence panels- what a mess! 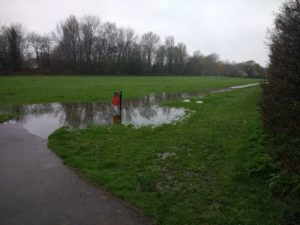 There’s a path under that puddle somewhere! 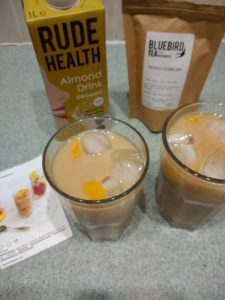 Wednesday was a quiet day- a 6 mile run first thing, breakfast and pottering at home including more wallpaper stripping and then the big job of sorting the tea cupboard. It was a total mess but I put a lot of the loose leaf teas into little jam jars (with the labels), and it looks so much neater now. I decided to use some of the peach cobbler tea to make a tea latte (you make the tea, leave to cool then top up with milk, ice and peach slices). It was really good-  I shall make it again for sure. I walked into town to meet Andy as we had a cake voucher for John Lewis, so we shared this fudge cake which was rather nice. 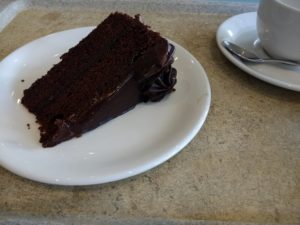 I also started a little job of painting some photo frames. 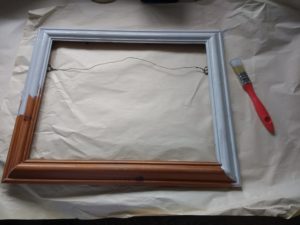 I was pretty pleased with how they turned out- they are going to go up in my office. 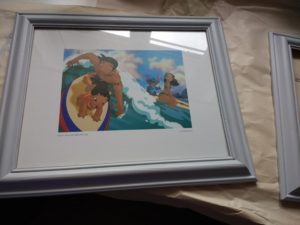 Thursday was a work day, and in the evening we went to the cinema to see Thoroughbreds, which was a bit like Strangers on a Train or something- dark and tense.

On Friday morning I walked into the station and then headed into London to meet with some friends. We had booked afternoon tea at the B Bakery (the one that also does the afternoon tea bus). 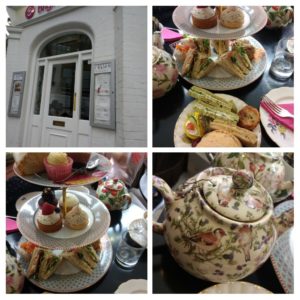 It was such good food (one of my friends can’t have dairy at the moment and they now do a vegan afternoon tea so she was very happy). I loved their teapots so much, especially the bird one. When they asked if we wanted more tea, instead of topping up with hot water (which is fine) they got fresh tea and teapots- we could have chosen a different blend but I stuck to the one I had chosen as it was so good- I think it was called After Five, it was black tea with cocoa and mint.

I shall save Saturday for another post as I decided to have a little parkrun adventure to finish the holidays with.

Do you like afternoon tea? Where is the best one that you have had?