Last Monday evening we went to the cinema to see Tully, which was good, but also a hard watch.  When we got back I saw that I had my email from parkrun saying that I could claim my 100 t-shirt! I celebrated my 100th parkrun back in March 2017, but under the old system, each time they were in stock they didn’t have the size I needed. For the new ones I had read that they had changed the female sizing a bit, so I checked the size guide which gave a measurement across the t-shirt. Compared to my 50 top (which is a small and perfect for me with a big of room), it seemed the medium would be the one to go for. All that was left was for me to wait for it to arrive!

Tuesday I wasn’t home in time for the club run, but that turned out to be lucky because I did around 4 miles but felt awful the whole way- I kept thinking “once I get going I’ll feel better” but I just felt sluggish and a bit sick at times. It was hot and I wonder if I didn’t drink enough on the Monday. I was very glad when I got home.

Wednesday was yoga- too cold this week to be outside! Lots of twists and some pretty tough poses which made my legs ache a lot- the final relaxation was very much needed.

On Thursday I was going to have a run, but then I got stuck in traffic and by the time I got home it was late, so I had a shower, we had dinner and then went out on a nice 3 mile walk in the evening- it was so much warmer than Wednesday. 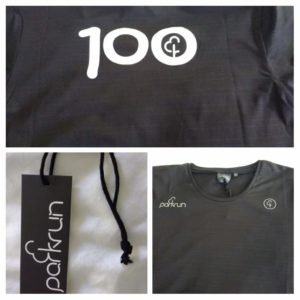 My t-shirt arrived! It’s lovely fabric, but it is really long. 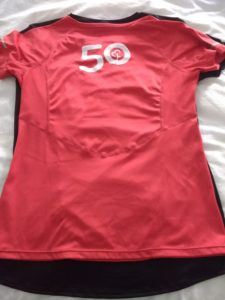 It’s a good few inches longer than my 50 shirt, but I would rather something was too long than too short. As I had exactly 100 to go until the next milestone (the next one is 250 which seems years away- 2 years at the absolute quickest if I go every weekend and only volunteer roles where I also get a run credit) it can be my countdown t-shirt. It will need to last me a while…

On Friday I had a massage booked as my shoulders have been getting worse and worse. I also had a few bits to pick up in town so afterwards I popped in to a few shops and got my errands sorted.

I spoke to Dad on the phone and we decided we would go to Heartwood Forest- it’s in St Albans and probably the closest to where they live, but it was stopped during the spring to let the paths recover a bit. It’s a gorgeous setting with wood carvings dotted along the route. It’s a very new forest, so the trees are only a few feet high in most places at the moment. The route it one and a half laps- you walk along from the finish to the start, half way up a hill, run to the top, around the top in a sort of p shape (with gorgeous views across the countryside), down to the finish and then do a complete lap.

You can’t park by it, so I parked about half a mile away, and heard Dad cycle up next to me as I was running to the start. When we got there and he took off his cycling jacket, he revealed he had his 100 top on too! 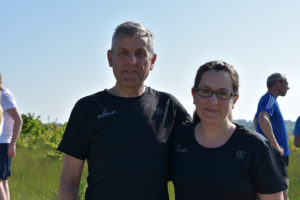 As we walked up to the start one of the two photographers asked if he could take our photo. We chatted to him and it turned out that although he now lived in St Albans, his home parkrun was Linford Wood, up in Milton Keynes, where my Dad’s cousin runs. 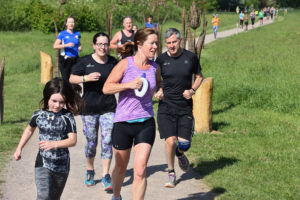 We set off at a fairly good pace, but the start is uphill so it wasn’t too fast. We were busy catching up- Dad had run on Wednesday and found it pretty tough too (and he’s cycled something like 50 miles last Saturday). 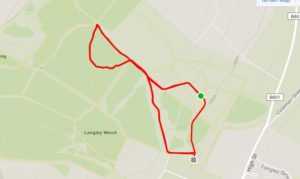 It was lovely to be there- the views are just fantastic up at the top, and the course is varied, twisting around so you can never see a long way ahead. In my mind the hill was as hard as Westmill, but it’s nowhere near that steep. 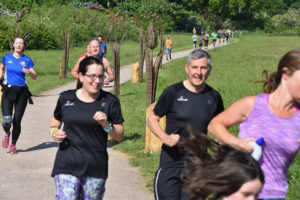 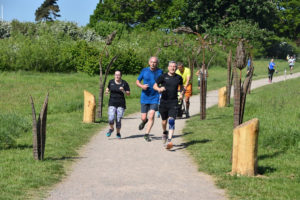 Dad has a much faster sprint that me- I always tell him to go ahead and that I’ll try and catch him, this is just coming up to the final corner, but he then slowed so I crossed the line first anyway.

They also had their highest attendance (as far as I can see)- with  168 runners. It’s such a great course, and as the paths are pretty wide at the start there isn’t that stop-start you get on some courses.

After that it was back to Mum and Dad’s for a shower, pancakes and watching birds in their garden. I’ll save the weekend for another post.

Which milestone are you closest to now? Do you enjoy visiting different parkrun courses? I think this one might be a summer favourite for us.

8 thoughts on “A parkrun countdown t-shirt!”