Last Saturday I found myself with a gap in my parkrun diary (I’d been to Ellenbrook for the last few weeks and Dad was away, so I could potentially head somewhere else), so I messaged her and said I would be up for any combination of running and walking. She was happy to join me with her baby in his buggy, so I looked into where to go. She lives near to Upton Court, so of course going there and getting a U would be great, but she had also mentioned Black Park being around the corner from her, and after a message on the lovely parkrun tourist facebook page it seemed that Black Park would be a better option for a buggy.

It wasn’t the best day to begin at parkrun (although my first parkrun was in pouring rain but I still loved it)- I did say things could only get better from then! I parked at 8.30am (the journey went around the M25 and then on either the M4 or M40, so I like to leave a lot of time just in case). It was a big pay and display car park, with parking being slightly cheaper before 9am, but it meant my ticket was only valid until 10.30 which scuppered things slightly later. 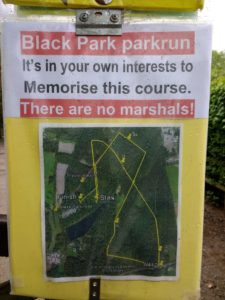 This sign somewhat terrified me as I am not the best at remembering routes, and it didn’t look that easy! I had seen that there were no marshals on the excellent Blog 7t, but as it was from many years ago I had thought that perhaps they would have changed it by now and put marshals out there (what if someone falls over or something?). 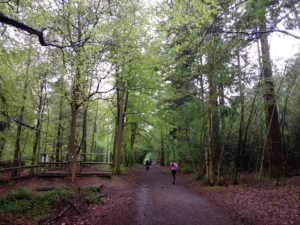 Anyway, I waited around and could see the signs for the start and finish area. I had a little jog up and down one of the paths to keep warm, as it was fairly chilly, but I didn’t want to go too far as I wanted to be there when my friend arrived. In they end they turned up at 8.59! Cutting it fine! 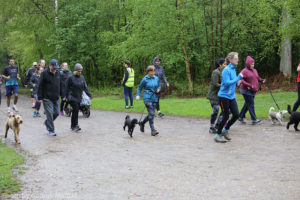 The start was a bit strange- I didn’t hear anything about a new runner briefing, and then the main briefing talked a bit about the barcodes, but it was hard to hear (partly because of there being 500+ people and us being at the back, but also due to the fact that they blew a whistle to get everyone’s attention which then set off a load of dogs barking and yapping all the way through the briefing). I was glad my friends hadn’t turned up on a different day because I think for a first timer, new to parkrun, it would have been a bit daunting and confusing. I didn’t see a tail walker but in looking at the results there was one, as the final runner was credited with a volunteer role.

Anyway, we set off (my friend’s wife also came along)- they took turns pushing the buggy, and we did a bit of running and a bit of walking. It was good to chat while we headed around the course. 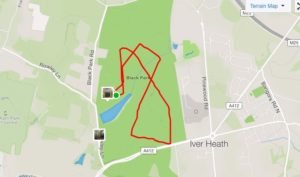 My worries about the route were unfounded as it was well-marked. At one of the cross over points a speedy runner sped by the crossing but as the people around us were fairly spread out that didn’t cause any problems. 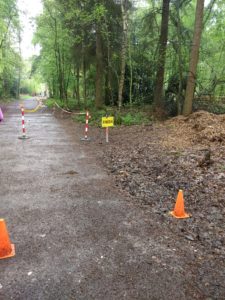 I wasn’t sure what to wear in the morning as it was so rainy. In the end I had gone for leggings, t-shirt, jacket and then my coat for the car, but it was so cold that I kept my coat on the whole time and should have really worn a running jacket (and gloves) as it was so cold.

As we neared the end we saw a person with a big camera, so we decided to do a big wave, and I shouted “it’s their first ever parkrun!”- as you can see in the photo I look rather excited. 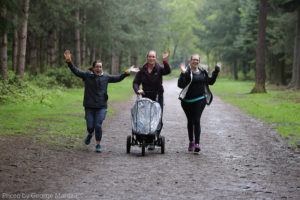 The finish funnel was a long one- they seem to get 500-600 runners each week, and when we got there (49:16) the scanner was at the end of the funnel so you had to get scanned (although my friend’s wife didn’t get a barcode as she only decided to come last minute) before exiting the funnel meaning hopefully no tokens would go missing.

We were then going to get a cup of tea in the cafe, but the one by the car park was busy, and the one further away was probably too far to get to and back before my parking ticket ran out (and I did offer to put more money on my ticket but after 9am it was more expensive)- so in the end I went back to theirs for a lovely cup of tea, before driving home.

So all in all, a successful visit to a parkrun and I have introduced two (or three if you count their baby) to the wonders of parkrun. I am hoping that they go back another time. The actual course was lovely- I do like a one lap course, and it was fairly flat, shaded and really scenic. I am not sure about there being no marshals though- they aren’t just there in case you get lost (I think, anyway). I also think that it was a shame there was no new runners briefing- as a tourist it’s just useful to hear about the course, but as a new runner it explains all sorts of things like the barcode, results and general rules, and is good reassurance for people who might be a bit nervous.

Have you introduced people to parkrun?  My Dad’s cousin went along for the first time a year or so ago as we had arranged to meet him at his local one, and since then he’s gone pretty regularly (40-something times) and is now volunteering as he is injured. Every now and then I get an email from him and he really does love the community side of it, so that makes me very happy too.  Do you know of courses without marshals?