For half term we headed up to Scotland for a bit of a whistle-stop tour. We could not have been any luckier with the weather. My theory is that if you go to Scotland (or the Lake District, or pretty much anywhere north of where we live) then if you get rain, then that’s what you expected, and anything better is a bonus. After work on Friday we had dinner, packed up the car and headed up north.

Andy had diligently researched hotels close to parkruns – originally we were going to stay in Leeds on the Friday night so I could go to Temple Newsam, but our route in Scotland changed so we stayed in Warrington. A few weeks ago they announced on their facebook page that the event wouldn’t go ahead on Saturday due to a community event taking part in the park- annoying, but I was glad I knew in advance. It meant we set off fairly early the next morning. We stopped in Sizergh castle (a NT place) to stretch our legs and of course sample some cake- we shared a piece of sticky toffee cake (a local speciality apparently) and it was so good although I think if you had a piece to yourself the sugar crash would be epic. 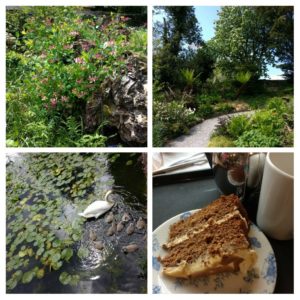 I enjoyed watching the goslings, and we had a good wander around the grounds before heading to Glasgow. 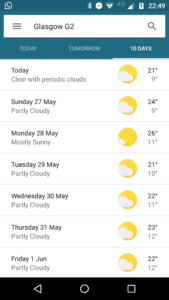 It was such gorgeous weather, and so after dropping off our bags we walked through the town centre out to one of the parks (Glasgow Green) and along by the river. I was also very excited to find that the Hotel Chocolat had a cafe, so we had to share a hazelnut hot chocolate. 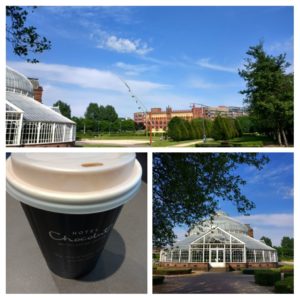 On the Sunday morning I went on a run, to the same park,enjoying the somewhat quieter streets. 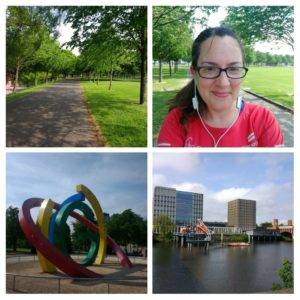 After breakfast we walked along the river in the opposite direction to where we went on Saturday, then drove to the botanical gardens for a walk and picnic lunch. The park was rammed! 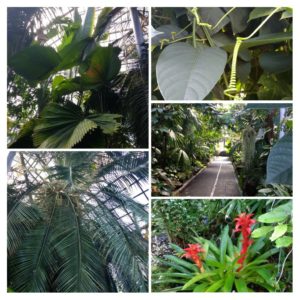 Then it was time to head off to Loch Lomond- another place crowded with people out enjoying the spectacular sunshine. 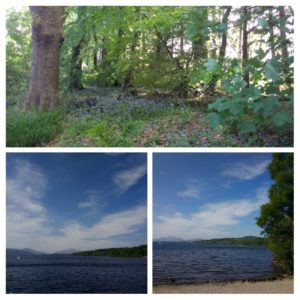 We walked along the lake for a bit, and then also through a loop in some woodland. 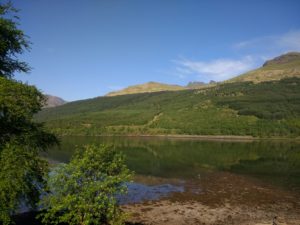 Our hotel was on the shore of the loch with more amazing views. It was light until so late in the evening too.

On Monday we had a longer drive to Inverness. We broke it up by stopping in Aviemore for lunch- we’d been to the amazing Mountain Cafe last year (possibly the same day) so we were keen to go there again. I had a delicious falafel and hummus sandwich, but the slices of bread were about a thick as two normal pieces of bread- we didn’t need dinner that day! 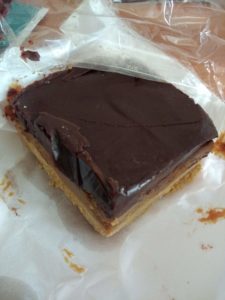 We did however have room to share a piece of caramel shortbread- it had the thickest caramel ever- so good. 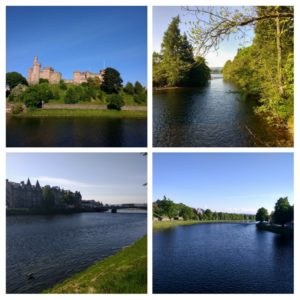 One of my friends lives in Inverness, so I had asked her for recomendations- she told us about the Ness Island Walks, basically paths linked by bridges going over the river, up to the town. Again, beautiful weather and such a fantastic place for an evening walk.

On Tuesday we had arranged to meet up with my friend and her two little children. We went to middle school together, and by a weird coincidence moved up to Scotland the same week that my family moved to St Albans. Despite only knowing each other for three and a half years, we kept in touch and often used to visit each other in the holidays, although as we have got older it has become harder to meet up. We had arranged to meet in Nairn (apparently the Brighton of the north) but the sea mist (I forget the Scottish word for it) had rolled in, so after a walk up and down the prom, we headed to Logie Steading, a farm with a cafe, shops and art gallery in the old stables, next to a river with lots of marked footpaths, where we had lunch in the cafe, a long walk by the river to the canyon, and then back to the cafe for ice cream. It was so lovely to catch up- of course we are in touch via social media and all of that, but in person it is different.

From there we drove to Aberdeen, although we didn’t end up seeing much of the town. We parked in the centre and went for dinner, but our hotel was on the outskirts and as we were headed to Edinburgh the next day, we didn’t go back into the centre in the morning.

In Edinburgh we visited the botanical gardens before heading to the centre. It was a bit overcast that day, but still warm. 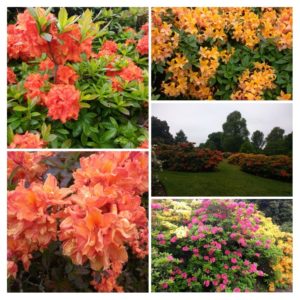 As it was rather overcast, of course we went to the Hotel Chocolat cafe, this time for a mint one (we shared a large each time but I am very sure that the Edinburgh large was bigger than the Glasgow large). 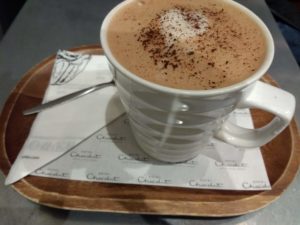 On Wednesday morning I had a run in Edinburgh- stupidly I was remembering my run in Glasgow, thinking I’d be out before it got busy, but of course forgetting it was a work day. The run had a lot of stop-starts as I had to wait to cross roads, but I still managed to do around 4 miles looping around the city centre. It was so misty that morning that I could hardly see the castle, although it did clear during the morning. 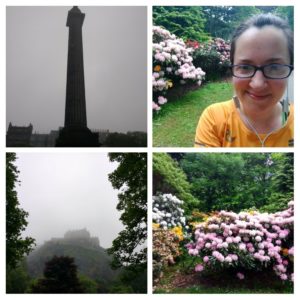 Then it was time for my favourite- breakfast (well, brunch really by the time I’d had a shower, we’d checked out and left our bags in the car and walked there..) at Loudon’s. 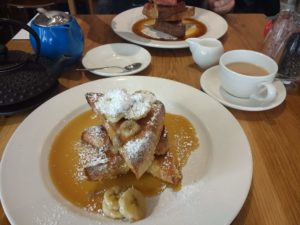 I love French toast, and so of course had to have it- I went for banana, salted caramel and toasted coconut. They do special blends of tea too, so I had one with black tea, cocoa nibs and coconut, which was delicious.

After a final walk around the park, it was time to head south and leave Scotland behind. We stopped off in Alnwick for a bit of a walk, and then drove to Newscastle for our penultimate stop. 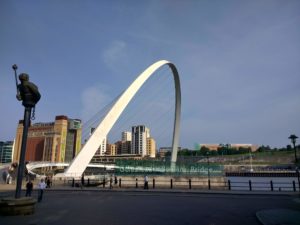 The blue skies were out in force, and it was enjoyable to wander around by the river, remembering when we were last here (for the Great North Run).

I’ll save our final stop for another blog post as it involved some parkrun tourism.

Have you ever been to Scotland? I suppose having a friend living there meant I had a reason to visit, but I have been a fair few times. It always surprises me when people haven’t been when it’s so close (and easy with options for going by plane, rail, even bus).