Ah, this time of year is just great when the summer stretches ahead of you. After a busy week last Sunday was a totally chilled out day which was just what was needed. After a lie in, we had breakfast and walked the long way into town, had a bit of a look around some of the shops (looking for a lamp and a mirror), stopping to get an iced drink to share on the way home.

In the afternoon we popped over to see Andy’s brother before heading home to potter in the garden and watch some TV.

On Monday I went out for a run first thing- I did just over 6 miles and it was very hot by the time I got home. Later in the morning we walked into town to get some sourdough bread for dinner, and then after that I drove to St Albans as I had booked a massage. After first driving to the out of town Sainsbury’s to get some peanut butter (as you do) I parked around a mile and a half from the town centre and walked in, thankfully arriving early so I could sit in the waiting room to cool down for a bit! 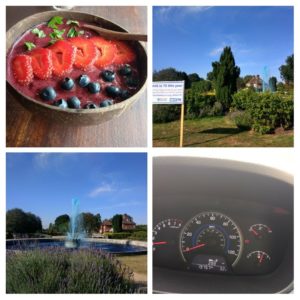 The massage was so needed- again she apologised for “digging around a bit” but I get so many knots in my shoulders and neck and afterwards the feeling of being able to turn and look over my shoulder is pretty amazing! Thankfully the room was cool with a fan going. I’d had a late breakfast and then didn’t have time for lunch (you can’t eat too close to a massage I don’t think) so by the time it finished and I went into town I was pretty hungry. I have walked past HIIT  kitchen a few times and noticed that they did acai bowls, so I decided to treat myself as a late lunch/ afternoon snack. It was very tasty and refreshing, although they didn’t do the unsweetened one which was on the menu (topped with seeds or granola) so I had to have the normal one topped with fruit.

I had to pick up some currency at the Post Office and had the most hilarious exchange:

Lady- Are you going on holiday?

L- That isn’t much money.

M- I’ll use a credit card for the rest.

L- Does your card charge for foriegn currency?

L- Oh.  Do you have travel insurance?

L- Is it due for renewal because we have a sale.

M- No, I think it’s November (turns out it’s with the bank so it just rolls over)

L- You do know it’s very expensive in Denmark don’t you?

M- Yes but I am only going for a couple of days (I was so tempted to tell her that I used to live in Denmark but she was almost shirty with me and I didn’t want her to not sell me the currency!)

L- When are you going?

I feel like she was possibly on commission for selling the currency/ credit card/ insurance, but honestly her attitude was terrible and would put anyone off. It was like I was being told off ( I think had I said I was going away the next day she would tell me off for getting the money out so last minute). Hard work!

On Tuesday I set the alarm a little earlier to go out on a run while it was a little cooler. After a shower and breakfast I got on with a lot of jobs at home (sorting out old magazines, putting things back in the dining room after the decorating) and then walked into town for a haircut. 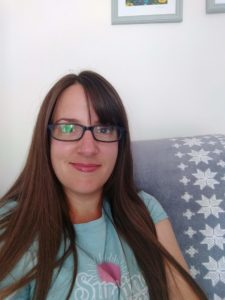 Post haircut although it still looks fairly long in this picture for some reason. 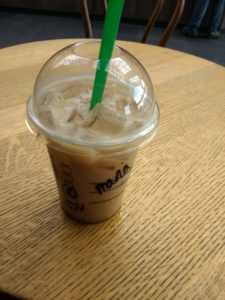 I got an iced chai (my favourite) for the hot walk home.

On Wednesday I went up to the Hitchin Lavender farm with my parents. They picked me up and we had a little look in the show fields and then went to the cafe (a delicious scone and Earl Grey tea for me- perfect) before heading to a local nature reserve for a walk around there. It was pretty hot but luckily most of the route was in the shade- we did have to dodge some massive stinging nettles and my mum got caught by a giant bramble at one point! 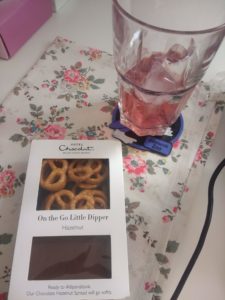 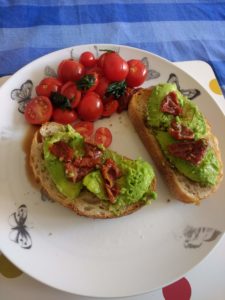 My Dad gave me a load of home-grown tomatoes, and we had sourdough bread left over from the other day, so I had avocado and tomatoes (and sundried tomatoes) on toast for dinner. I haven’t had this in ages and it is so simple but so tasty.

We went to see the new Mission Impossible film, which (behind the Bourne films) is just my type of action film- good stunts, some tense moments but also some comic relief so it doesn’t feel too stressful.  It feels like recently we have seen films which have been OK (Jurassic Park/ Rampage) but nothing really good, so it was a change to leave the cinema feeling that it was properly time well spent.

On Thursday I did a 3 mile run first thing, and then walked into town to meet some friends. We walked down to the park and had a picnic- it was absolutely baking hot but OK in the shade- then walked back to town for iced drinks before heading our separate ways home. I had to then finish packing as I was off to the airport on Thursday night as we had a super early flight to Copenhagen on Friday morning- more on that another day!

What are you looking forward to this summer? Have you enjoyed some good films lately?

4 thoughts on “The beginning of summer!”