Last Sunday (after a super hot run) I spent a fair bit of time sitting in the shade in the garden, reading a magazine. Andy’s parents popped over for some iced tea, so we sat in the garden although the shade of course moved so we were all pretty hot in the end. 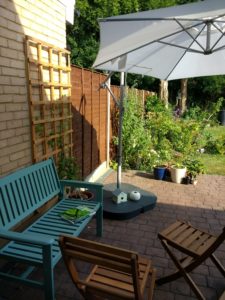 We had to have an early dinner as we were off to see Flight of the Conchords! We were meant to be going a while back, but Bret broke some bones in his hand…

From their facebook page when the postponement was announced

No way was he going to be playing guitar, keyboard etc with that. 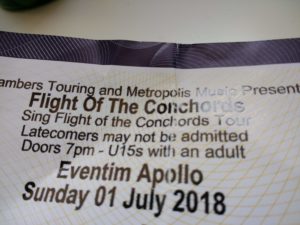 If you’ve not heard of it, it’s a TV show (started as a radio show) about a band from New Zealand trying to make it in New York. They  write original songs and are brilliant at capturing the essence of other styles of music (they do a song called Inner City Pressure which is a lot like West End Girls by The Pet Shop Boys)- also as Bret has worked on the Muppets Most Wanted soundtrack (one of my favourites) and Moana there is a lot of music pedigree right there (Jermaine is the crab in Moana and also one of the prisoners in Muppets). For the show they stay in character and talk about their music, their touring, and then play new and old songs. They are so multi talented, playing guitars, bass, keyboard, various percussion instruments and even doing the most hilarious rock and roll recorder playing. It was a brilliant evening but a late night as by the time we had driven back it was gone midnight.

Then at work on Monday we had “the call”- Ofsted were coming on Tuesday (I hadn’t packed any lunch due to the late night, instead thinking I’d walk up to the local shops at lunch time, but then once the call came in I didn’t fancy anything funnily enough). Instead of the early night planned, I was at work until late on Monday night and then back in for 6am on Tuesday morning. My original plan was an early morning run on Tuesday (as the club run clashed with the England match) but instead I was up early for a different reason!

Tuesday was a pretty stressful day (although when I got up at 5am and attempted to eat some breakfast I saw the fox cub mooch around our garden, so I enjoyed that part of the day), with lots of meetings during the day- I felt quite nauseous at times and managed to eat an apple and a biscuit at lunch (in between meetings) but that was enough. I got home on Tuesday in time to watch the football, had a shower at half time and was planning to go to bed at 9pm- then of course they went to extra time so even when the football finished I was pretty full of adrenaline again and found it hard to get to sleep.

Then we had sports day which is always fun but really tiring- luckily it was the morning and it was probably the coolest morning of the week. When I got home on Wednesday I sat in the garden for ages, just feeling a bit like I had jet lag. 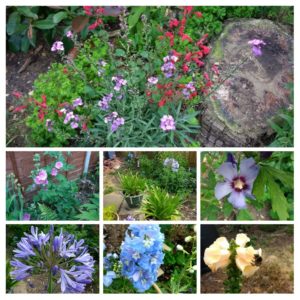 There were lots of bees buzzing about so I just enjoyed a little time watching them bumble around. 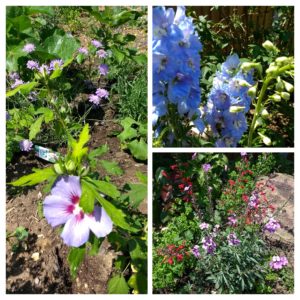 I nearly didn’t go to yoga as it is such hard work, but I knew I’d feel better in the end (plus I pay in advance so I was on the register)- we did lots of twists and held some poses for longer which helped, and then for the final relaxation we had the option of some eye pillows (a bit like beanbags) which really helped to filter out everything else.

On Thursday our yoga at work was a special session focusing on restorative poses. We did some mobilising first (some squats and some other things which I have forgotten) and then spent 5 mins in each of 3 poses. I fell properly asleep in the final one!

I’d said I would do some baking for the summer fair (as I couldn’t make the date to help on a stall) so no time for a run that day either. Instead I walked around to the shops to get some ingredients, baked a couple of batches of cookies, had a shower (not sure if I have mentioned our water woes before but we have had this leak for a while now, something to do with the overflow tank, with various symptoms) which turned out to be a freezing cold shower so I couldn’t wash my hair because of something to do with the tank.

Before the week started I had thought I would have a run after work on Friday, but I needed to pop into town to pick up an order, and by the time I got home I felt so shattered that I decided that I would wash my hair and watch some Wimbledon. So a grand total of zero miles, and two yoga sessions for the week so far. I’d already volunteered to tail walk on Saturday as I had a 10k race on Sunday, so I decided to call it a taper.

Have you still managed running in this heat?