I am now in the glorious part of the summer holidays where I am not sure what the day is any more- my google calendar is making sure I don’t miss anything! 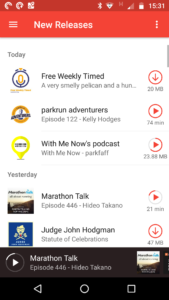 First up, much to my excitement, the parkrun show podcast is back!! It’s now called “With me now”, but still hosted by Danny and Nicola (fun fact- Danny’s parents both volunteer at Ellenbrook Fields parkrun pretty much every week). I used to listen to the old one, and when it finished I found the parkrun adventurers, which is an Australian one.  I’ve quite enjoyed the official one (Free, Weekly, Timed) although that is more for maybe new parkrunners, whereas the others are maybe more for the parkrun obsessive.

So, what have I been up to these past couple of weeks since getting back from Copenhagen?

The garden has been keeping my busy, although with the heat it’s been restricted to late evening when it’s cooler. I finally moved the pots off the drive (they were creating a buffer zone between the leak and the house, but now the leak has been stopped temporarily they didn’t need to be there)- they add a bit of colour to our front garden. 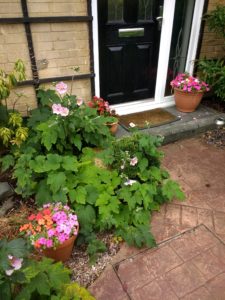 After an 8 mile run in the morning I met up with some friends from work for a cream tea at Bill’s. 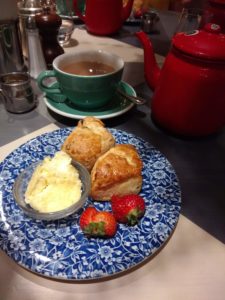 Although that turned into a bit of a panic as I had booked one local to me (because St Albans had no availability), and they phoned a few hours before saying they had no water so had to cancel. After a few messages back and forth on whatsapp, we decided to risk the St Albans one- it turned out they don’t take bookings for the afternoon so there was loads of space! I was planning on walking into town anyway, so I drove to the edge of St Albans and walked in- 24,000 steps by the end of the day wasn’t too shabby! 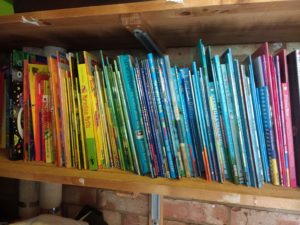 On the Tuesday I went into work and organised my new classroom (all the furniture was moved to one part of the room as the floors get cleaned)- I took some time out to put all my story books in colour order. You have no idea how much this pleases me to look at! 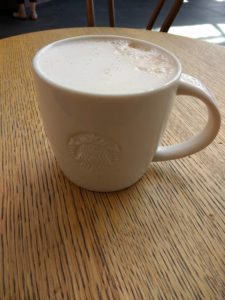 On the Wednesday I did a 4.5 mile run and then a bit of yoga when I got back. Later I walked to town and enjoyed my free Starbucks, taking the time to sit in the cafe and watch the world go by.  I then walked in again in the afternoon because I had ordered a new phone and it was ready to collect, so I ended up doing just over 22,000 steps and the second walk was not so enjoyable as it was just boiling.

We did cool down in the evening by going to the cinema to see the Skyscraper film which was fairly easy going and quite funny in places, although I can’t watch any of the bits where people dangle off buildings. 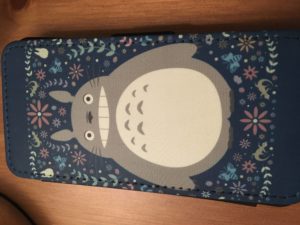 I heart my new phone case

On Thursday I did a 5 mile run in the morning, and then we were off to catch the Eurostar to Amsterdam in the evening (I’ll do a separate post about that at some point)- we got back on Sunday.

As I didn’t run over the weekend, I went out for 10 miles on Monday morning. 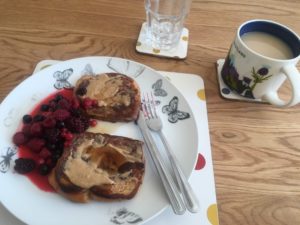 When I got back I made myself French toast for breakfast and watched the birds in the garden. 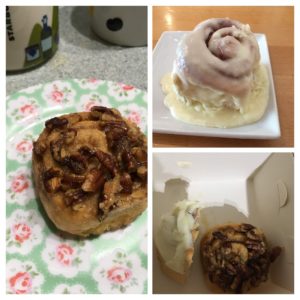 On Tuesday I met a friend at the Rickmansworth Aquadrome (a bit like a lake or reservoir) for a walk, before heading to Cinnamon Square for what she informed me were amazing cinnamon rolls. I was not disappointed- these were so good. I took home one cinnamon square and one sticky bun (covered in pecans) for us to share at a later date. Andy could not wait and had his half of the cinnamon bun before I could even take a photo!

Later we popped over to see our niece and nephew as he was turning 1.

On Wednesday I did a 5 mile run first thing and then I met my parents, sister and niece at Shenley tea rooms where we had a cream tea before having a bit of a walk. When I got home I spent a while in the garden, clearing away more dead branches (we still have things left from the autumn) and cutting back a few plants that were struggling with the heat. I also started to sort out a bag of clothes for the charity shop- I need to go through the wardrobe and finish this as I only managed to finish a couple of drawers.

On Thursday after seeing some family (we went to the park in the rain for a bit) I went a bit stir crazy at home with all the rain (not helped by our internet being down, so I couldn’t do any work, and could not watch any of the things I’ve been saving on netflix for said rainy day…)I worked by way through a pile of magazines, had many cups of tea and in the end I went out on a walk and got rather drenched, and then tried to make jam (I say tried, because even though the bit I tested was fine, the stuff in jars didn’t set so I ended up doing it again on Friday- more on that another time as that could be an essay in itself!).

Which podcasts do you enjoy?  Do you like to organise things by colour or any other ways? How do you occupy yourself on rainy days?

4 thoughts on “Cream teas, cinnamon rolls and sorting by colour”