A few times I have run to and from parkrun, but the two parkruns closest to me are a little bit far away for it to be a regular thing- Panshanger is 4 miles away (equalling an 11 mile run) and Ellenbrook Fields is 5 miles (so the run there + back + parkrun = a half marathon) so I tend to run to and from parkruns when I am touring. Last weekend we were busy on Sunday, so I decided to have a long run on Saturday morning instead. I’d chatted to my Dad who had decided to go to Panshanger, as EF warned of a busy car park due to all the freshers arriving at Herts uni (you park in the Herts uni car park).

This meant I could run there and ask Dad to give me a lift part of the way home. I had to do a slightly longer run as I wanted to total 9 miles, so in the end I did just under 6 miles on the way there- I got a bit panicked that I was cutting it fine as the last bit takes a deceptively long time, but in the end I got to the start with about 10 mins to spare- just enough time to hang my jumper on the fence and then chat to Dad.

The parkrun miles were my fastest (finishing with a 9.05 mile) so I was pretty pleased with that, having not run that far since August (as we were doing the 10k).

In the end Dad dropped me off at home, which was much appreciated- I did suggest a roundabout so he didn’t have to detour at all, but that was still a mile and a half from me (as the road is more direct than the path). Then it was time to have a quick shower and then time to head into London for the rest of the day. 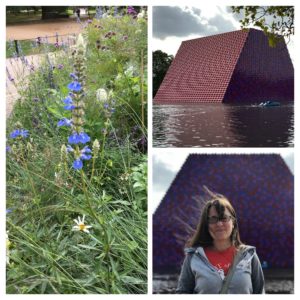 For some reason all the pictures of just me were super windswept, while if it was the two of us my hair was all neat!

We got the train to Finsbury park and then the tube onwards to Oxford Street- we popped into a couple of shops and picked up a picnic to take to the park. (Side note, does anyone else hate that Pret don’t put the labels on the actual food packets? We were going to share a veggie flatbread, but it was by the shelf labels for a tuna flatbread-you could see that they were the wrong way around but I just didn’t quite trust it so we got a vegan special wrap instead). 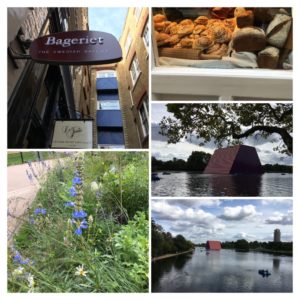 Andy wanted to see the big sculpture in Hyde Park so we walked around the lake, before walking to Trafalgar Square and then Covent Garden. On our way we popped to the BB bakery and got a pistachio cupcake to take home for dessert. I wanted to go to Lululemon and try on some running shorts, and as we cut through a side street we both stopped as we could smell the most amazing smell. We realised we were right outside a Swedish bakery, so I could not resist buying a cinnamon roll for us to share too. 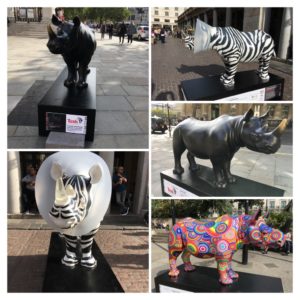 We also saw a few of these rhinos- I love it when there is a trail like this (I think the best I’ve done is the Snowdogs in Brighton). We then got the tube to Angel so I could go to Bird & Blend for some of the pumpkin spice tea, but yet again (am I cursed?) the tea wasn’t for sale until the Sunday- gah!

Annoyingly we just missed a train by about 5 mins, and then the next train we were going to get was cancelled, so we ended up sitting on the platform for nearly an hour. 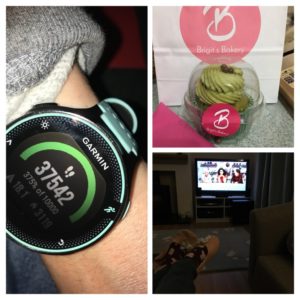 By the time we got home I’d walked over 37,000 steps (because of the run first thing too) so I watched some of Extra Slice (I love the hedgehog cakes so much) and had a cup of tea and shared the cinnamon roll, which was amazing. (The cupcake for dessert later was also very good, but so much icing- I have no idea how people could eat one by themselves without having frosting overload). Although I felt quite tired by the evening, I was pretty pleased that I’d run a fairly long way and been walking all day and not felt too stiff or sore. I have signed up to a half marathon in a couple of weeks, and I realised that my long runs were really in August so I needed to do a few closer to it to check I can still manage it. 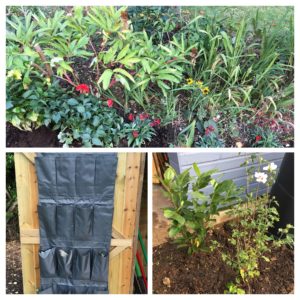 Sunday was spent out and about- in the garden centre, sorting out new plants (and the shed tidy- an idea stolen from Pinterest – it hangs on the door for all the gloves, trowels etc) and visiting family.

Which baked goods can you not resist? A warm cinnamon roll is one of my absolute favourites.  Are you an icing or a cake person?  I do like a little bit of icing, and I think they make cakes look prettier, but I really can’t eat the mountains that are usually on little cupcakes.

4 thoughts on “A parkrun open sandwich”