The week leading up to the August Bank holiday was spent in the Dordogne, in France. Although a small bit of it didn’t go quite to plan, it was a lovely relaxing week. Andy had the Friday afternoon off work so we drove to the tunnel (got on an hour earlier which is always good) and then after a quick stop in the supermarket for food, had around a 4 hour drive to our travel lodge style hotel. The next morning we were up early and had around a 7 hour drive to get to our cottage. Lots of podcasts were listened to (Judge John Hodgman is my favourite at the moment). 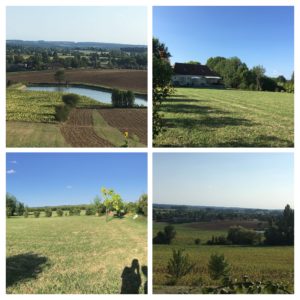 The cottage gardens and surrounding countryside

Our cottage was gorgeous- it was an old barn that had been renovated by an English couple – and was set in really pretty countryside full of fields of sunflowers and plum orchards. We would head out for a walk in the evening once it was cooler, and even saw some deer one evening by a little reservoir.

I’d packed some running kit with me, aiming to run early in the mornings before it got too hot. However on the first evening whilst out on a walk, I stupidly decided to jump over a ditch (we were walking along the roads which were very quiet, but we saw a path on the other side of the ditch)- anyway, as I landed I jarred my hip/leg, which then made the muscle seize up. For the rest of that evening I couldn’t even sit on a chair as my leg wouldn’t bend at all- that put my running plans back a bit! 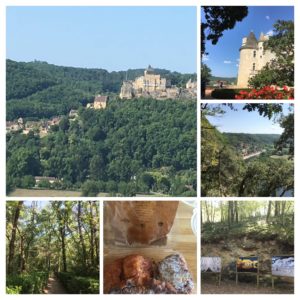 On the Sunday we headed to a nearby town as they had a famous Sunday market- the town was bustling and I knew moving would help my leg (so it would not get more stiff) but we didn’t stay too long. We did find a local bakery that sold chocolate almond croissants (the king of the croissant) so that was a good addition to breakfast. 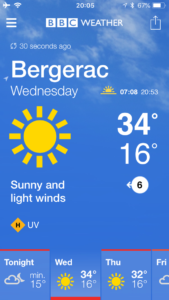 It was hot hot hot until the Friday! 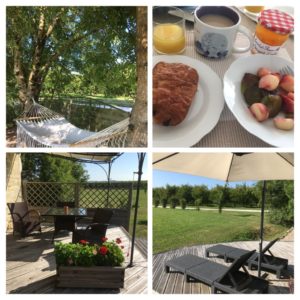 The hammock in the shade, breakfast of fresh fruit + croissant, and the decking area (had to move each time the shadows moved as it was way too hot to be in direct sunlight)

On Monday after chilling out in the morning (lots of reading in the shade) we drove to some gardens on the edge of a cliff (this was fun because I could go downstairs and slopes fine, but as I could not bend my leg in front of me, I had to go up stairs one at a time, and the gardens were at the top of cliff-side stairs). There were beautiful views across the valley to the river and beyond so it was worth it. 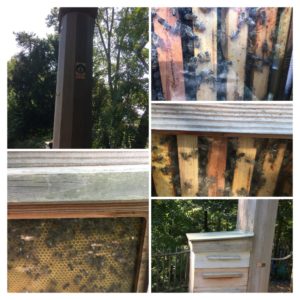 They had a really cool beehive with a sort of chimney entrance- apparently bees need free space around the hive so they can fly directly into it, and so the chimney on the top of the hive meant that no people were in the flight path of the bees. It had little flaps you could open and see the various parts of the inner workings which was very interesting too. 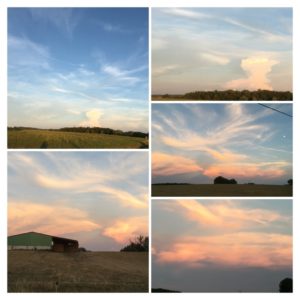 There were some amazing clouds in the evening when we headed out for a walk.

On the Tuesday we headed to a nearby town, Bergerac, and had a lovely wander around the streets as well as a walk by the river. 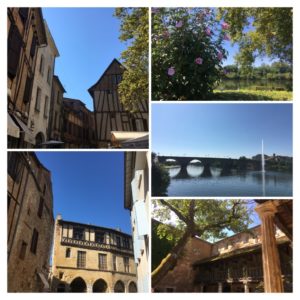 The Wednesday saw us head further afield, visiting some more cliff-side gardens (and as it was the hottest day it was great to find a trail through woodland with lots of paintings hidden in the forest to admire), wandering around a couple of little towns and spending the afternoon at a chateaux. 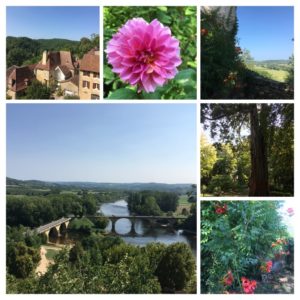 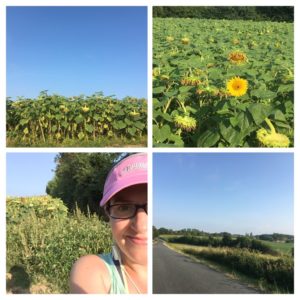 On the Thursday my leg felt good enough to try a short run-  I could walk up stairs normally and it seemed to be bending OK so I did a very gentle not-quite-3 miles and all was good. Although I did have a panic when I got back to the cottage as there was a dog half way down the drive (something that looked like a husky- big and wolf-like)- I usually stop if I come across a dog, but there was no-one around so it wasn’t like the owner would call it. I slowed down a bit and kept looking back- it walked around the corner and watched me- my hands were shaking a lot and it took a while for me to unlock the door but it didn’t chase me thankfully. After yet more reading in the shade (I managed to read two and a half books in the week we were away) we went to another local medieval town in the afternoon for another wander.

On Friday we got up early to see some caves- there are loads of caves in this part of France, some with amazing rock formations and some with prehistoric paintings. I was very keen to see some paintings, and after a bit of research (some of the caves are replicas because the originals were being damaged by light/ algae or something) we found one, Rouffignac, but there were only a limited amount of tickets per day, as you were shown around by a guide in a little train, so we wanted to be there first thing. 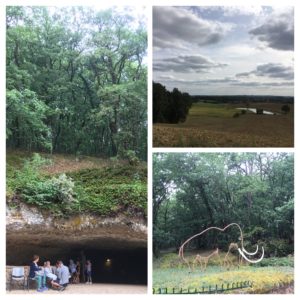 It was much cooler on the Friday so the hour drive wasn’t too bad. We got there at about 8.40am, along with a group of other early birds. I had read stories of people turning up at 10.30 and being given a 4.30pm time slot which we really didn’t want, but we got on the first train. You were not allowed to take photos inside the caves, and although the guide spoke French (some would speak English but it was down to the luck of the draw) you could use a little tablet with information on it. The paintings were fascinating to see, and I was really pleased we had made the effort to get over there.

As it was more overcast, I’d decided to have a run in the afternoon, but as we went out for a walk after lunch it got very hot indeed, so I left it until a bit later in the day. A 4 mile run done (with only a tiny scare when seeing a dog sat at the end of a driveway) and I was pretty pleased with that. I was also excited to get an email from my yoga teacher (Josie) who had put a short video on you tube– I followed it when I got back from my run (and several times since)- it’s only 15 mins long but I have appreciated following along as I just can’t remember all the poses on my own. 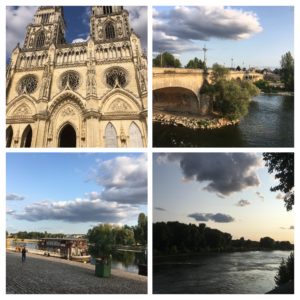 On the Saturday we checked out and drove to Orleans for an overnight stop en route to the tunnel. The city was a great place to stop, right on the river with lots of little streets to wander around. Then on Sunday it was another long drive to the tunnel and home (in the pouring rain I might add).

Did you have a good Bank Holiday weekend?

4 thoughts on “A week in the Dordogne”