As I am sure you will know, I love any excuse to visit Brighton, and so to make the most of the final weekend of the school holidays, we booked a Friday night down there. 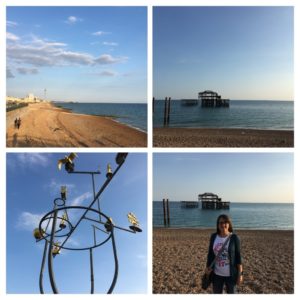 The weather was amazing and we enjoyed a long walk to Hove prom and back before having dinner in Leon.

Of course I would parkrun in the morning, and have already been to Hove Prom and Preston Park a couple of times, and Brighton & Hove once, so I started looking to see if a different Brighton one would be possible. We got the train down so it had to be either a runnable distance from the hotel, or accessible via public transport. I had discounted Bevendean Down parkrun on a previous visit as it looked a little way out of the city, but when I revisited the course page it mentioned a train station, Moulsecoomb, around a mile from the start.  Excitingly (for me), this was two train stops and a 6 min journey from the main Brighton station, so I decided to head there. 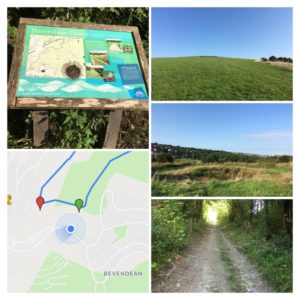 I bought my tickets the night before to save on the morning panic, and had emailed the link from the course page so I could look at it on maps once I got there. Thankfully I left loads of time, getting a train that arrived at 8:17 am (with a backup of a train 10 mins later). The course page does warn that it’s hard to find, and it turned out I went a different (slightly longer) way than it described. I was running along a residential street and saw the sign to the park, so followed the path instead of the map for the last bit. As I reached the lower end of the field, I saw a couple of runners heading to the left, so I followed them and could see a few high-viz people so I knew I was in the right place- phew! I got there at 8:45 so I was glad I hadn’t got the later train.

Everyone collected by the finish area (the start and finish are in slightly different places)- there was a tarp to put any belongings on, so I left my jumper there. There weren’t many people and I ended up chatting to a girl in a Finsbury Park apricot top, and her mum, who’s come along to walk the first lap.

At 9:00 everyone walked back along the edge of the field (back the way I had come) to the start. I was looking for the amazing views that were promised, but all I could see were the houses in the estate.

I didn’t actually walk on the first lap but my running was so slow it looks like I did!

However, I needn’t have worried as look at that elevation- we were going up for some fantastic views. They warned the first timers that it’s two laps, and behind the first hill that you could see, was another, even bigger hill, so we should pace ourselves. I was going along for the views and had no illusions about any sort of good time.

It was a small group (32 runners) that set off, and even as I ran past the finish area (it’s two and a bit laps) I was very near the back.

The course started by the bottom of the field, running along to the finish, before turning and running up along the field- it was as I got to the end of this that I could see the hill that they meant! It was steep and long.

However, when you got to the top of the hill you were rewarded with the most amazing views-you could see all the way down to the sea, including the big tower (i360 thing). 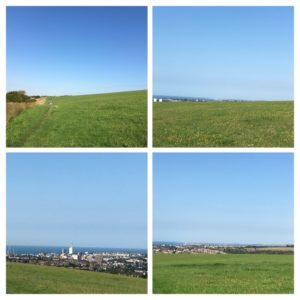 Then you ran down where we had started, and then did that all again. I had worn my trail shoes (again it was advised on the course page) and I was glad I had as the ground was uneven and I found it hard to run fast on the downhill. On the second lap I could see a group of people ahead of me all walking, so I thought I’d catch them up, but then as the hill carried on I ended up walking too!

The marshals were fantastic, and lots of people were waiting and chatting by the finish area. I got one of my highest token numbers (28) but my slowest time (minus tail-walking)- 36:04- that shows you how tough it was as it was 5 mins slower than my Tring time from a few weeks ago- also a hilly route.

The lady I had been chatting to offered me a lift back to the station, which was so kind of her, and on the walk back to their car we came the way described- there were even parkrun arrows on the street to show how to get to the start.

I met Andy in Cafe Coho for pancakes and then we spent a lovely day walking around Brighton (35,000 steps in total!) but I’ll get to that another day. 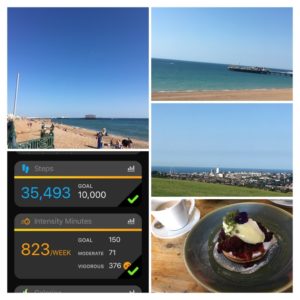 So, another Brighton parkrun done, and I must agree that this is a pretty  special one. Yes, it’s tough and hilly, but who cares about times when you have amazing views like that?

4 thoughts on “Bevendean Down parkrun- what amazing views!”