Confusingly, in the space of a few weeks I have now been to Rushmoor and Rushmere parkrun. Rushmere was this past weekend. It’s close to Leighton Buzzard, in Bedfordshire, but apparently the route is actually in Buckinghamshire. Anyway, I went to my parents house and then my Dad drove me and my brother up to the country park where the parkrun is held. Parking was £3 which you paid on exit- there was plenty of parking for us and the field with the finish funnel was directly next to the car park so no chance of getting lost! 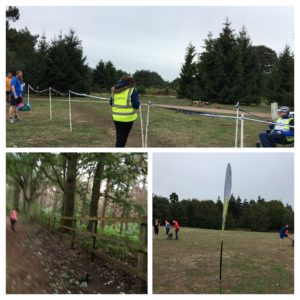 We got there with around 20 mins to spare, and waited in the car for a bit (it was so chilly!) before getting out and using the toilets (I wouldn’t usually, but it had been a good hour journey)- this meant we missed the tourist briefing- whoops!

We had looked it up in advance and knew it was two laps through woodland- it sounded perfect.

The main briefing was brilliant too- the RD stood on a picnic table and welcomed everyone, gave a special mention to the volunteers who had arrived early to clear the storm debris from the course, and then introduced the gong– this was so exciting! If you get a pb, or if it is your first time (automatically a pb anyway) or even if you’re having a good hair day you were allowed to ring the gong. I was very much looking forward to that! We were warned of other debris en route particularly conkers and apples (“It’s as if someone had thrown marbles all over the path”), particularly on the steep descent.

After the briefing we walked along a path a little way, as the route wasn’t quite 2 full laps, and then we were off. Dad whizzed off right away, and I ended up with a bit of back and forth with my brother- I’d overtake him on the up bits, and he’d overtaken me on the downhills. The course was through woodland and just wonderful- winding through trees, gently up and down. At one point we ran near the edge of the forest so you could see across fields on one side, before heading back into the woods again. I think there were only 4 marshals out there, but they were all great, clapping everyone past. The steep descent even had a warning sign, and it was so steep so I really slowed- lots of tree roots to look for too, and I didn’t fancy falling over. A two lap is always enjoyable (not quite as good as one lap, but close) because the 1.5 mile seems to go by so fast, and then you remember a few bits on the second loop and know what to look out for. Running through the finish area once is good too as all the timers and scanners cheer you on.

As I neared the finish one runner put in a great sprint finish so I cheered him as he overtook me. I could hear someone else coming, and it turned out to be Tony – it was quite fun having a mini battle. (He did say he wondered if it was OK to overtake me with metres to go but of course it’s all fine). I had sped up a little to try and stay as close to him as possible and when the results came through (30:21) I thought that maybe I needed 21 for my parkrun bingo, and I was right! 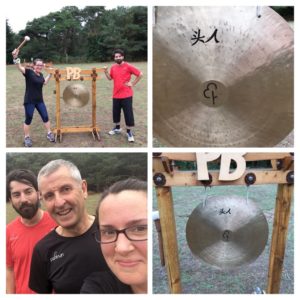 Of course we had to bang the gong afterwards- we all took turns while we took photos. I did a rather gentle one, and then Tony whacked it so hard! It was great though as people gave you a little clap, and after we moved away a few other people rang it, so we clapped them. I’ve seen a pb bell at Tring, but the gong takes some beating. I feel like Ellenbrook could do with something but I am not sure what else- maybe something linked to it being on an old airfield? Ideas on a postcard please!

That was my 49th parkrun venue! They seem to be mounting up so quickly now. I’m so close to finishing bingo now- I only need 17 and 18 seconds now (although it’s not something you can plan for, as even if you time it on your watch, you won’t know exactly when the timer for parkrun pressed “go”).

The RD chatted to us and invited us to the cafe for breakfast, but Mum had promised pancakes so we headed back to see her. We have planned a revisit in the spring and hopefully Mum will come with us to watch and we can go to the cafe after then.

Does your parkrun have anything to celebrate pb’s with?