So the weeks have just been flying by. On the Sunday after getting home and unpacking we walked into town for our free Starbucks drinks. I was worried I’d feel tired or need a sleep in the day, but I think the combination of the super early start (3.30am) and the run plus walking around the  park meant that I slept fine on the plane and so was OK. In the early evening I felt a bit sleepy but nothing too bad, and the week was OK- it took me a bit of time to get to sleep each night but I wasn’t waking up any more than usual. I did feel very sleepy when I was driving, so I did have to have the window down a few times! 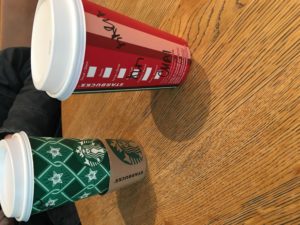 Argh! Why won’t the photos be the right way up??? I liked the green cup that Andy had which is why I took the photo.

After letting friends and colleagues know about our holiday, the messages and cards haven’t stopped coming, which is so lovely (but unexpected in a way). My favourite one was from one of Andy’s aunts, who put on the inside “Congratulations (at last)” which did make me chuckle!

The first week back was very busy- I had a course on Tuesday with a later start, so I did a run first thing. On Wednesday I had to travel to a meeting after work and so didn’t sign up to yoga as I didn’t think I’d make it back in time (in fact I could have made it, so when I got home I had a run, although it was so dark and even though I chose routes that I thought were well lit, they weren’t in places so after that I found my torch), and then on Thursday I had a meeting somewhere else in the afternoon. We’d booked to see Bohemian Rhapsody which I just loved. We also had shutters fitted in our dining room- we ordered them back in the summer but they took a while to be made so we’ve had no curtains or anything in there since Easter- it’s made it feel so much cosier.

Friday was a nice evening at home, catching up on TV and relaxing. On Saturday I’d arranged to meet Dad at Ellenbrook Fields parkrun (we were so close to going to the inaugural Jersey Farm parkrun, as it is less than a mile from where they live- the new event from when Heartwood Forest had to close- but they had asked for a quiet launch because reading between the lines it was complaints from locals which meant the other event had to close, so we are going in a few weeks)- anyway, it was a lovely morning for a run, and despite us chatting (me less so the further around we got) we managed a speedy (for me) 27:29. Then it was back to Mum and Dad’s for pancakes. 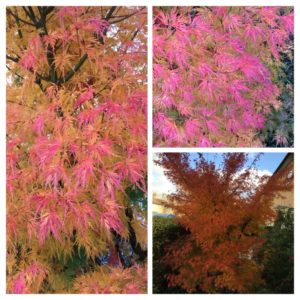 I had a fair bit of work to do, but also needed to do some jobs in the garden, and luckily I decided on the garden first (clearing leaves and a bit of cutting back) because once I came inside and showered it pelted it down.

I needed to pop to town, but it was still hammering down so I drove a little closer and then walked the rest of the way- I’d signed up to the Caffe Nero app (you got a free drink) so I got myself a winter spiced hot chocolate, which may be my favourite so far, not too sweet. If you bring your own cup you get an extra stamp on your reward card too. 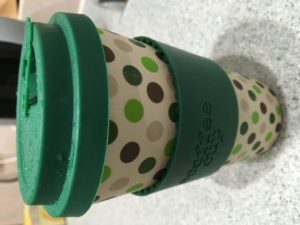 On Sunday morning thankfully the weather was better, so I had a nice 8 mile run, past the fountain (with a lovely display of poppies in the centre), before heading over to see Andy’s family in the afternoon. 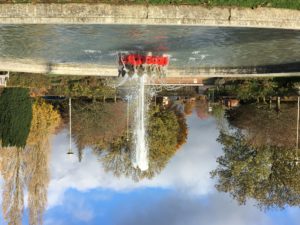 OK, so now I think the photos are trolling me….

Week 2 was more standard- a walk after work on Monday to pick up a lamp from John Lewis, a run on Tuesday (with my torch), yoga on Wednesday and another run on Thursday- I had a lot of bad traffic so the runs were cut short due to being home later than planned and having a lot of work to do later on in the evening. 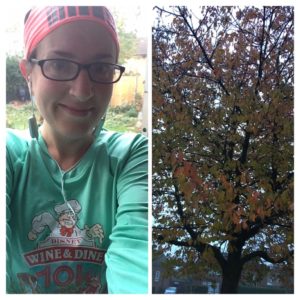 I did get to wear my new Run Disney top as it’s a long sleeved one- perfect for this time of year.

Then on Friday it was time to pack, have dinner and then head to the station as we were going down to Brighton for the weekend. 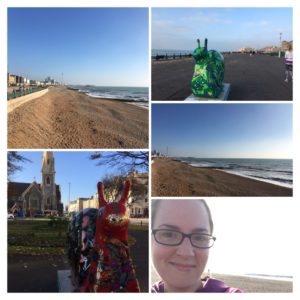 I’d decided on Hove Prom parkrun as it was the nearest to the hotel, and very easy to find. I’d also not been to it for ages as recently I’ve been ticking off the other Brighton parkruns/ staying further away. It was sunny but very cold as I ran down there. I had seen there was a snail trail for a local hospice (the same one that did the snowdogs a few years ago) and so my run down here had a few deviations while I took photos. As I went to take a picture of the snail by the big i360 tower, someone else was taking photos of it so I had to wait. She apologised (I said I was fine to wait of course) and then she told me she was the artist- we chatted for a bit about the process- they had to submit their designs and then the sponsors chose the design which would reflect their company- her design was Quadrosnailia (love the play on words).

Anyway, time for parkrun- it was so busy! There were a load of students from Warwick uni down, but maybe the race on Sunday made the numbers swell too. Out of interest I looked back at my past Hove Prom results- I first ran it in 2015 (my first UK parkrun tourism) and I ran 27:39, and 108 people ran it, in 2016 I went back and ran it in 28:11, with 136 people running, and then this year there were 373 runners- such a huge difference! I hadn’t looked at my pb in advance, and wasn’t really pushing it (I had a race on the Sunday) but in the end I was close to a course, with 27:52. Ah well, I wasn’t after one. I was a bit annoyed at some of the people during the run briefing though, as some people just would not be quiet, despite some volunteers walking through the crowd and shushing. There was also a really yappy dog which was so high pitched it was hurting my ears. It’s just so rude to talk over the briefing as well as meaning you might miss important information- this time for example they had to talk about a slight course deviation because they had tried to sweep the pebbles off the prom but couldn’t get rid of them all. 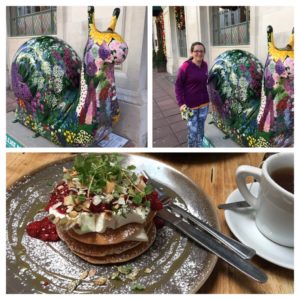 Then it was time for breakfast- we met at Cafe Coho and Andy had already ordered so when I got there my breakfast had just arrived- perfect timing! Delicious pancakes with berries, yoghurt and toasted coconut. 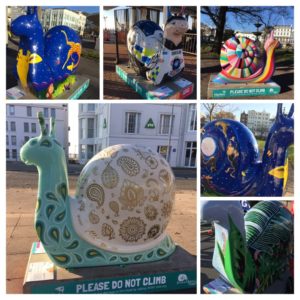 After a shower we had a super long walk along the prom to the lagoon at Hove, spotting more snails (even found the Fat Boy Slim one by his cafe) and then walked back to the centre of Brighton. We could not have been luckier with the weather- it was gorgeous, although it did get really cold once the sun went down. 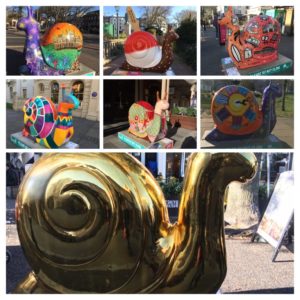 We had a bit of cake to share in the afternoon, and then did a spot of shopping. I had to go to the jewellers as we’d got our wedding rings from a shop in Brighton (Ring)- we ordered them in May and then picked them up in September, and it fitted me fine, but now it has been colder it has been slipping off, so I wanted it re-sized. When we picked them up, Andy had his re-sized there and then, so I thought they would do the same for me. When the guy in the shop got out a packet and put my ring into it and asked for a contact number, I think I made a fool of myself by saying “oh, are you not going to do it right away?”- we did explain that they had done that for Andy and they were all very nice to me but they said mine would need to be sent to the workshop and they would post it to us! I’d only got used to wearing it!

We’d booked Food for Friends for dinner- sharing delicious tahini dips to start, and then I had a lovely sweet potato and pomegranate salad- good fuel for Sunday! I shall save the race for another post as this is rather long (yet again).

If you do use a reusable cup or metal straw, what do you do with them the rest of the time? If I know I am going to have a drink, I’ll take a cup with me (although the free  Starbucks drink is a medium and the cups I have are only small sized), but then if I am still out I’ll have a cup with dregs in it to either slosh around in my bag or hold the whole time. And the same with a straw- I have a bamboo and a metal straw, but then how do I keep it clean in my bag? I need some sort of pouch- no good using a plastic bag because then that will get thrown away once the milk or whatever gets on it, and then that’s more rubbish. Any clever ideas?

8 thoughts on “A catch up and another visit to Brighton”