I was really looking forward to this part of the holiday, although as it got closer we did wonder if we should have done the 5k instead as that was on the Friday, and not the same day we flew home… 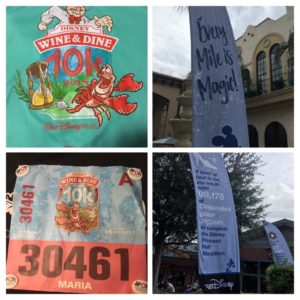 The long-sleeved top we got with our race entry at the expo/ signs around Disney Springs about Run Disney races and then my number all ready to go.

We had been to the expo on Thursday morning, and I’d been quite restrained with shopping- getting a Run Disney vest, a nice running jacket (they both say every mile is magic) and a mug, as well as picking up our numbers and long sleeved shirts. (After that we went to a few normal shops and I got a cool penguin t-shirt and then some nice essential oil sprays – we’d seen someone use one on the plane and it was so refreshing to smell, and the little travel pack were under 100ml so you could have one in your hand luggage). 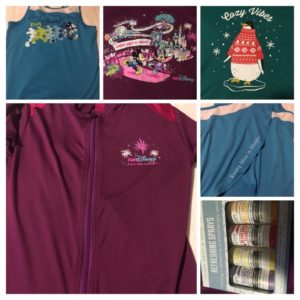 We had been back to our room on Friday afternoon for a few hours to pack as much as we could, get out our running kit for the morning, and also have a bit of a rest, as we’d planned a late night watching fireworks at Hollywood Studios and then Epcot. Because we’d driven (rather then getting the bus) we were back at the hotel at about 10.40pm, and probably in bed with lights out at 11pm. The alarm was set for 3.30am though, so it wasn’t a long sleep! 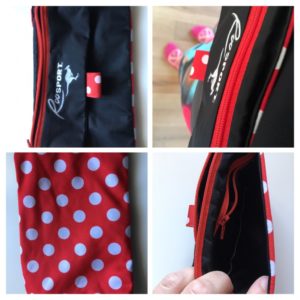 At the expo I had also got this little magnetic pocket thing (the magnet won’t damage phones or credit cards), which clips to your waistband (most of my summer leggings have good pockets but lots of the winter ones don’t)- I packed it with a cereal bar, lip balm face wipes and tissues.

The race bus picked us up from the bus stop close to our room just before 4am (it said all runners needed to be on a bus by 4) and it wasn’t a long journey to the Magic Kingdom car park where the race started. Andy ate his cereal bar but I didn’t fancy mine- I wouldn’t usually eat before a parkrun or long run, but with races when you are hanging around for a bit I usually do, although I think the super early start messed with my stomach as I didn’t feel hungry at all.

We had to go through security and then we joined a queue to see Mickey and Minnie, but the queue was an hour and they were leaving in 45 mins, and then at around 4.45 we were all called to the starting pens, so we decided we would try for a photo at the end.

There was a huge stage set up and the people did a great job of keeping us entertained as the race didn’t start until 5.30am- I’d never usually get somewhere so early especially as we already had our numbers. They had interviews with participants, songs and dances, videos of previous years, clips from their sponsors/ charity partners (a local food bank). Somehow we were in the first section, and pretty much bang on 5.30 they set us off with some fireworks and a blast of music! As we ran, every 5 minutes or so we heard another lot of fireworks go off, so we knew the next wave was being set off. 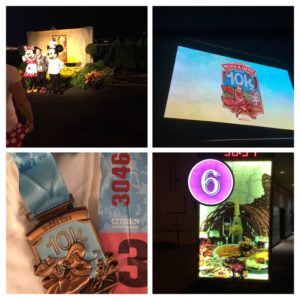 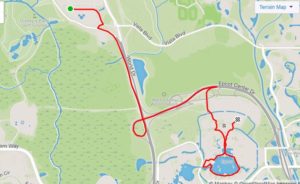 The first few miles were along big roads between the two parks, and as it was so dark we couldn’t see much of the scenery (but then it’s all pretty similar with lots of trees, green spaces and man-made ponds) but there were lots of things going on for us to look at- characters with people queuing up for photos, big screens playing songs from The Little Mermaid (mainly) and bands. The tough bit was the loop as it was an on/off ramp and although it was a gentle hill, it seemed to go on for ages! I got confused there and saw the big screen, feeling surprised that the next one was playing the same song until I realised that was where we had already been!  I slowed down to take a photo of each mile marker, although looking back later some of them were linked to countries but others were themed as postcards from different countries. By then we could see the big Epcot ball and knew we were getting close to the park.

It was more lively in the park with more spectators, and more music playing. The buildings were all twinkling with fairy lights (they way they do during the fireworks) and there were loads of photographers. We had a photo pass  included with our tickets, and you could link your race number, so every now and then you would run through some very bright lights and it took me a while to realise that the photographers were just beyond the lights. As we ran past the stage in front of Spaceship Earth, I saw people running in to stand in front and have their photos taken, so I told Andy that on our way back we would get a photo there too. The route through the park went around the world showcase lagoon, with a little detour (I think around some building work by France), and then on our way back we got a quick photo before running out of the park and into the finish area. They were calling out everyone’s names as we finished which is always a nice touch.

The finish area was very efficient with loads of people there giving out scary-coloured rehydration drinks (I’ll pass thanks), water, medals (woohoo), bananas and then little Run Disney boxes filled with snacks. The wait for Mickey and Minnie was only 10 minutes, so we joined it and ate our bananas in the queue. Then it was time to get the bus back to the hotel, have a shower and finish packing. 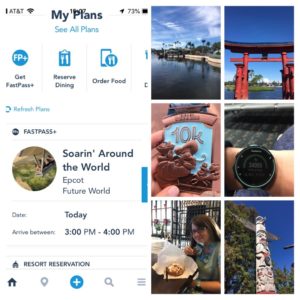 We must have been back at the hotel before 7.30am, so after showering we walked over to the cafe in the hotel grounds and shared a cinnamon bun. Then it was time to check out and head to Epcot for a final morning- we both wore our medals (lots of people did) and we got so many “congratulations” from various people which was lovely.  As we had only shared the cinnamon bun we decided to share a second breakfast of a school bread (the cardamon spiced bun filled with custard and topped with coconut)- sitting in the sun enjoying one of those was a pretty good post-race treat.  The park was totally rammed- it was the only Saturday we were there and seemed full of hen dos and locals on various versions of pub crawls (drinking around the world…. showcase), so we only went on a few rides in the end, watching the France film (both nearly fell asleep), going to see the Pixar shorts film, and then one last trip to Soarin’ to finish the holiday in style.

We left the park, drove to the airport, checked our luggage and had a wander before our first flight (to Miami). I’d packed the lavender spray and put that on my flight pillow and eye mask in the hope that it would help. I fell asleep on the internal flight for a bit, then our main flight was from Miami at 10pm (we nearly missed the fight because we found where we thought the departure gate was, but in fact the sign was for the gate and it was down some stairs, and by the time we realised there were more people downstairs they had nearly finished loading the plane so that was a bit of a panic for me), so I just put on my eye mask, loaded up some podcasts and went to sleep- the lavender spray helped but probably the 34,000 steps plus the super early start had something to do with it! They woke me up to ask me if I wanted dinner (I think because I had requested a veggie one) but that must have been about 11pm and after being up at half 3 I wasn’t fancying dinner!). I pretty much slept the entire time, waking up about 30 minutes before we landed. 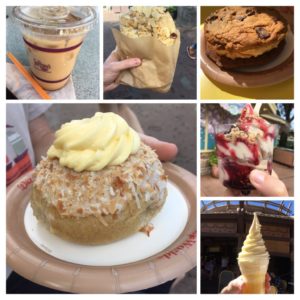 The best snacks! We tried a caramel apple chai latte (which basically tasted like Philharmagic smells- I am glad we had it once, but once was enough!). delicious almond kringla from the Norway bakery, the cookie sandwich with pumpkin ice-cream, an almond banana soft serve from the food festival, a Dole Whip and our newest discovery of school bread (also from the Norway bakery).  Until next time Disney…