Along with Dad, I’d pencilled in the two weekends of the holidays for some parkrun tourism.  We went to Gunpowder the other week as that’s still fairly near (around 25 min drive from me) but it is starting to get harder to find events that are close enough that we haven’t done.

I suggested Aylesbury, but Dad looked and thought it was a bit far. He suggested Houghton Hall, so we arranged that I’d pick him up just after 8 and we’d head there. It sounded familiar, and when I looked at my blog, I realised I had already run it, and more crucially so had Dad. I write down the postcode for Wendover Woods as I ran that with my brother, thinking I’d say to Dad we could head there instead as it was new to him at least. On Saturday morning I got a text from him saying that if I was a few minutes early we would go to Aylesbury, so of course the most haste less speed thing happened, and I got stuck behind a recovery truck. I’d not had time to look up the new postcode, but thankfully when I picked up Dad he’d written down the directions and postcode and we were good to go! 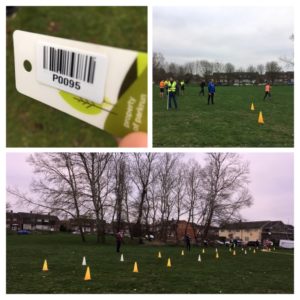 The car park was right by the finish area, and thankfully we parked at 8.50am- a bit later than I’d like but just in time. There was a tarpaulin where people were leaving jumpers, and I decided to leave mine there because although it was cold, it wasn’t as bad as I thought, and I knew I’d warm up once I started.

The info on the page warned you to be there in time because the start was a little way away so they walk there early to ensure a prompt start. (You can see below the green start was a bit of a walk from the finish). 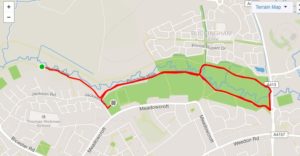 The route was very flat, out along a hard gravel path (road shoes were fine), two loops and then back along the path to the finish area. It was varied parkland, with some of the path being through woods but most of it in more open parkland. It had a nice feel to it, with the marshals on the loops having a bit of a chat with runners on their first and second passing. We were lapped by the front runner just as we came up to repeat our second lap- impressive!

We chatted on the way around, and achieved a nice royal flush of 9:22, 8:53, 8:34, 8:24, for a time of 27:42. The lady behind us as we finished said “I managed to keep up with you” and then commented that we must be running comfortably if we could still be talking at the end! We walked back to collect our tops, did some stretches and then headed back to the car.

When we got out of the car my knee felt a little stiff, but after walking around a bit in the kitchen (while Mum cooked pancakes) it was fine. Later on, after driving home and having a shower, we walked into town and at first my knee felt weird again- after stopping and rubbing it a bit it was fine. 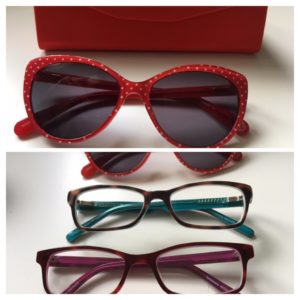 I had to get one of my glasses adjusted (side point- my opticians appointment was on the Thursday and they were in the store for me to pick up on the Sunday- so speedy!). I clearly have a style that I like because when they are side by side my old pair and two new pairs are the same shape and size. I’m looking forward to sunshine to try out my Minnie style sunglasses too, as my last pair of sunglasses were so big and kept slipping down so I just never wore them.

We watched BlackkKlansman which was very well done but also pretty terrifying, particularly the last few minutes as it makes you think about how little has changed in so many places.

On Sunday morning the little catch on my Garmin finally gave up- it’s been splitting for a while, so I repaired it  with a hairband. I also chose my Run Disney top from the Disneyland Paris half marathon as now all my running tops are organised by colour it makes choosing the nice tops very easy, instead of choosing the top that is on top of the pile!  I headed out on my run, but at first my knee felt weird- it felt as though my knee was bending the wrong way (which I know is impossible) when I put my foot down. I had walked a mile, every now and then trying to run, and was about to cut through the park and head home, but on the run I tried in the park my knee suddenly felt fine. I took it gently but ended up running 8 miles (well 1 mile walk, 7 mile run). 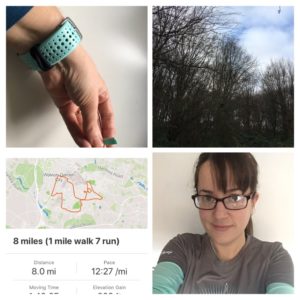 Sunday evening was time for a treat- we bought a Hotel Chocolat Velvetiser before Christmas and it is so good- you add little flakes of chocolate and whichever milk you like and it swirls around, blending and heating it, to make a perfect cup. (We had an offer to get the little sample packs which give you the right amount, but they also do tubs which will work out better in the end once we decide on the best flavours). 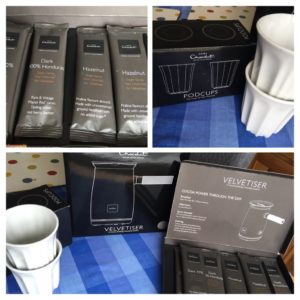 We watched Spirited Away, which I found rather weird! I think some of the Ghibli films are a little too much fantasy/magic for my tastes. 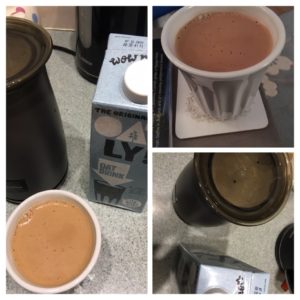 On Monday my knee was feeling a bit odd when I was trying to run at work, but it was a rest day so I just had a short walk in the evening. We were then off to the cinema to see The Favourite. This was a totally weird film. I quite liked most of it, as it was a bit quirky and the battle between the female leads was interesting, but towards the end it was starting to feel a bit long and I was slightly losing interest.

As there was no yoga on Wednesday, I decided to have an extra day of rest on Tuesday and run on Wednesday instead. I was feeling OK, so decided to head out for a gentle one and see. I was very excited to see that the new With Me Now podcast was out. 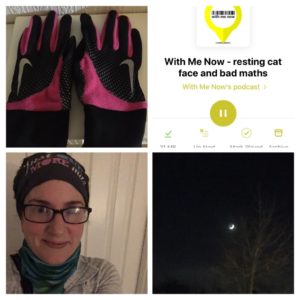 My run got off to a bad start though as I thought I was ready, then realised I needed gloves, ran back upstairs to get them, was about to leave and then realised I needed my torch so had to run back upstairs and find that. As I could run in the daytime in the holidays I’d got out of the dark-running routine! Anyway, 4 miles listening to parkrun tourism chatter under a beautiful sliver of a moon and I was feeling very happy. It was so cold out there though!

On Thursday I decided to run a little further and managed 5 miles, again it was freezing! This time catching up on Marathon Talk podcasts from the holidays. My knee was feeling much better, so I think it must have been a muscle pulling on the knee in a weird way. Sometimes with stiff legs a run helps because it gets the blood flowing and you can warm up and cool down.

On Friday I had to stop off at the shops on the way home from work, and in the evening we ended up watching the Bros documentary from I-player. I didn’t really know anything about them (it would not have been the type of music my parents would have listened to) and it almost seemed like it was a bit of a parody (or like The Disaster Artist). Some very David Brent-like gems in there.

Are you a hot chocolate fan?  How do you decide on which parkruns to tour to? I saw a cool idea on the tourist page with a tin where the person had written down the parkruns on folded bits of paper and they would choose one on the Friday night which could work for close by ones.

Which films have you seen lately? I loved Mary Poppins but the funny thing was in the cinema they didn’t turn the lights on at the end, so we sat there right until the very end (I usually sit for a bit as I like to enjoy the music and sort of let the end of the film wash over me) thinking that there would be a funny end to the credits, but no, the lights weren’t even turned on when the whole thing finished!

6 thoughts on “Aylesbury parkrun as a last minute decision, and resting my knee”