Earlier on last week I caved and ordered some tea from Bird&Blend- I get a little box each month (the subscription thing) but they released their Valentine’s blends (the day after we were in Brighton, I shall note- it seems their launches are always on a Sunday…) and they were all my favourite. They also did something on Instagram which added a little bag of Red Velvet tea to my basket, so I had to order something really. 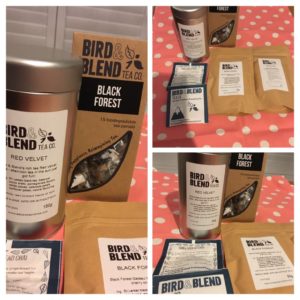 I’ve not tried the Black Forest tea before (black tea with cocoa and cherries) although I had a similar blend from David’s Tea (a Canadian tea shop) years ago, so I had high hopes, and it has not disappointed.

On Monday I just had a short walk in the evening (I seemed to have done a million steps at work that day and just had to pop to the post box). I also spent the day feeling really hungry- I think it was from the 12 miles on the Sunday- if I don’t eat something as soon as I get back then I seem to pay for it later (and as Andy’s parents had come over I spent a bit of time chatting to them before showering and then cooking my porridge, so it was probably nearly an hour after getting back that I finally ate breakfast).

On Tuesday I headed out for a run, and after a few minutes it started raining. I’d not worn a visor but thought I’d be OK. Wrong. The rain was sticking to my glasses, and then the torch I was wearing seemed to be reflecting off the rain, and also diffusing in the droplets on my glasses making it very hard to see at times- I really had to stop in a few places. Anyway, I got 4 miles done and that felt like plenty as seeing where I was going was such hard work. 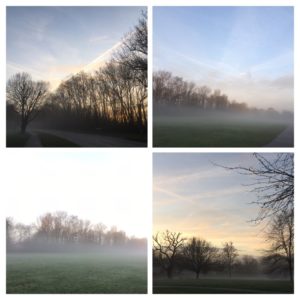 A little walk on Wednesday morning in the fog and I was treated to some pretty views. 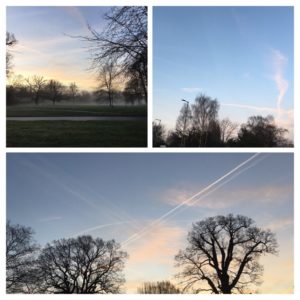 On Wednesday at yoga we had a bit of a focus on inversions (being upside-down) and were told to practise the handstand. We go into the downward dog position, move one leg a little further towards our hands, and then kick the legs up- the idea being that if you are super strong and balanced you can get your legs up and hold it (none of the throwing your hands down that other kids did when I was at school). We also practised against a wall, and some people were paired up, with one person holding the hips of the other person to steady them. I have never managed this, but the yoga teacher told me that she would hold my hips and that I was strong enough (on a few occasions I’ve nearly got there and then panicked as one shoulder has collapsed and I end up crumpling onto my head). Anyway, I feel like I don’t kick up very high but somehow she managed to hold my hips and so I managed to hold a handstand! I held it for a few breaths before coming back down and I felt so chuffed with myself. We then went on to headstands- I can only manage the tripod (well I say manage, I can get one leg up at a time)- I am more confident in this though and can hold each leg for a little bit- one day I’ll get there.

On Thursday I did a 4 mile run- it was pretty windy out there which made it hard, but thankfully no rain so at least I could see where I was going! 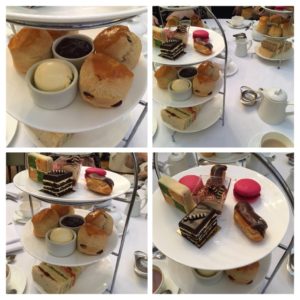 On Friday our team at work were off to have an afternoon tea together. We’d booked a local hotel and spent a couple of hours catching up and relaxing. Before we had got to the scones, a new round of sandwiches were brought out, so we ended up taking all the cakes home for later. 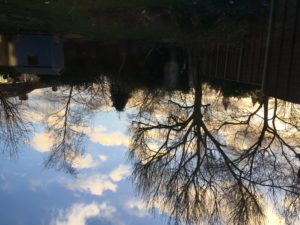 ? Up early watching the trees get blown about on Saturday morning. It’s upside down again, what joy.

On Saturday Dad had suggested Jersey Farm parkrun as he needed to pick up his car from a nearby pub. I kept an eye on facebook as a few runs were being cancelled due to the high winds, but locally we were all OK. I drove round just as Dad was getting on his bike- he thought I was going to meet him there, but we ended up walking there together, running around (in the mud) and then walking up to the pub before he drove us back. I do like the Jersey Farm route- it’s two laps and laps aren’t my favourite, but it’s varied scenery and fairly undulating, so it keeps you interested. It was very muddy and quite slippery in places, so I was glad of my trail shoes, but then ended up with wet socks because some of it was too boggy. I am pretty sure all the core team listen to With Me Now as they always seem to do arbitrary shout-outs- it was someone’s 400th this week (not a thing..) and they got a clap.

Of course it was then pancakes made by Mum, while I heard about their holiday (a cruise on the Panama Canal and then some time in Costa Rica)- all amazing.

After driving home and having a shower, I ploughed through my work, and then walked into town to warm up again and get my free drink. 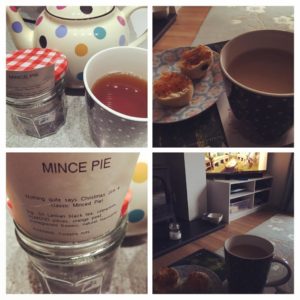 Once home I had some mince pie tea (so good) and a scone leftover from the afternoon tea, and watched a bit of Winter Watch- so relaxing.

On Sunday morning I did some more excellent long run maths. 14 miles- so that is 2×7 miles, or two lots of the 3 mile loop and 2 lots of a 4 mile loop. I thought I’d do short-long-long-short loops, but then after doing 3 miles, the longer loop turned out to be more like 5.5 miles (which somehow I calculated to be a bit short). On my second long loop I realised that I would not need the second short loop, because I was already coming up to 13 miles, so I just took a bit of a meandering route back home to make the 14. Honestly I am not sure how I manage to make these things so confusing for myself.  It was raining on and off, fairly heavily at times, so I was glad to be home in the warm, but made the mistake of getting in the shower too quickly. My skin just felt like it was on fire and got so itchy. 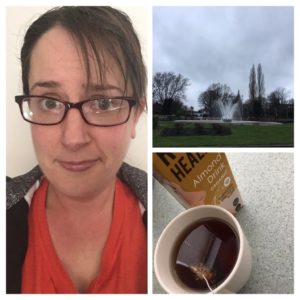 After getting out I realised that my skin was basically the same colour as my orange top- not good! Time for porridge and tea to properly warm up.

I’d planned some baking for work this week, but in town on Saturday I had forgotten that I’d run out of baking paper, so after drying my hair I popped around to the local shop to get some, before getting baking. I’ve not had a proper baking day in ages and it was fab.

I made two lots of caramel shortbread and two lots of jammy dodger blondies as they always prove popular. 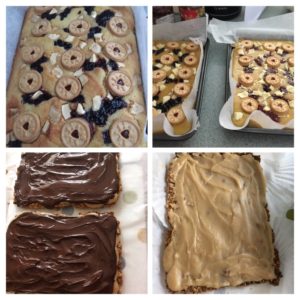 In a bit we are off to see the new Lego movie- I think I’ve earned a little sit down (and hopefully my legs won’t get too stiff).

Which bit of afternoon tea is your favourite? It’s always the scones for me, and of course tea in a pot.

Which bakes go down well at your work? White chocolate seems to always be popular with my colleagues.

8 thoughts on “Afternoon tea, a muddy parkrun and a long run”